Both gold (GLD) and silver (SLV) have got all of the attention the past few months, but platinum (PPLT) is displaying a bullish setup after breaking to new 52-week highs last month. The metal has been one of the worst performers up until Q2 of this year, but the metal has managed to reclaim its key monthly moving averages which is a bullish sign. The current forecast points to a 9% increase in demand for platinum year-over-year, with most of this driven by investment demand. This catalyst of increased demand suggests that the recent breakout in platinum could be for real, and I would expect any 10% dips from the highs to be buying opportunities.

One of my favorite setups is watching for out of favor assets to reclaim their key monthly moving averages, and platinum did precisely this last month. Not only did the metal manage to retrieve its 20-month moving average (green line) in August of this year, but it’s now taking a stab at closing above its 40-month moving average. Bottoms in asset classes are typically confirmed by the commitment shown to these key monthly levels, and this is precisely how gold bottomed and shifted the momentum back to bullish to finish 2018. Platinum now has the opportunity to do this to end the month of September, but a monthly close above $87.50 for the Platinum ETF will be necessary. With seven trading days left to go in the month, this is looking like a possibility. While this monthly signal does not always lead to substantial returns over the short-term (1-3 months), it is a bullish signal on an intermediate basis (6-12 months). 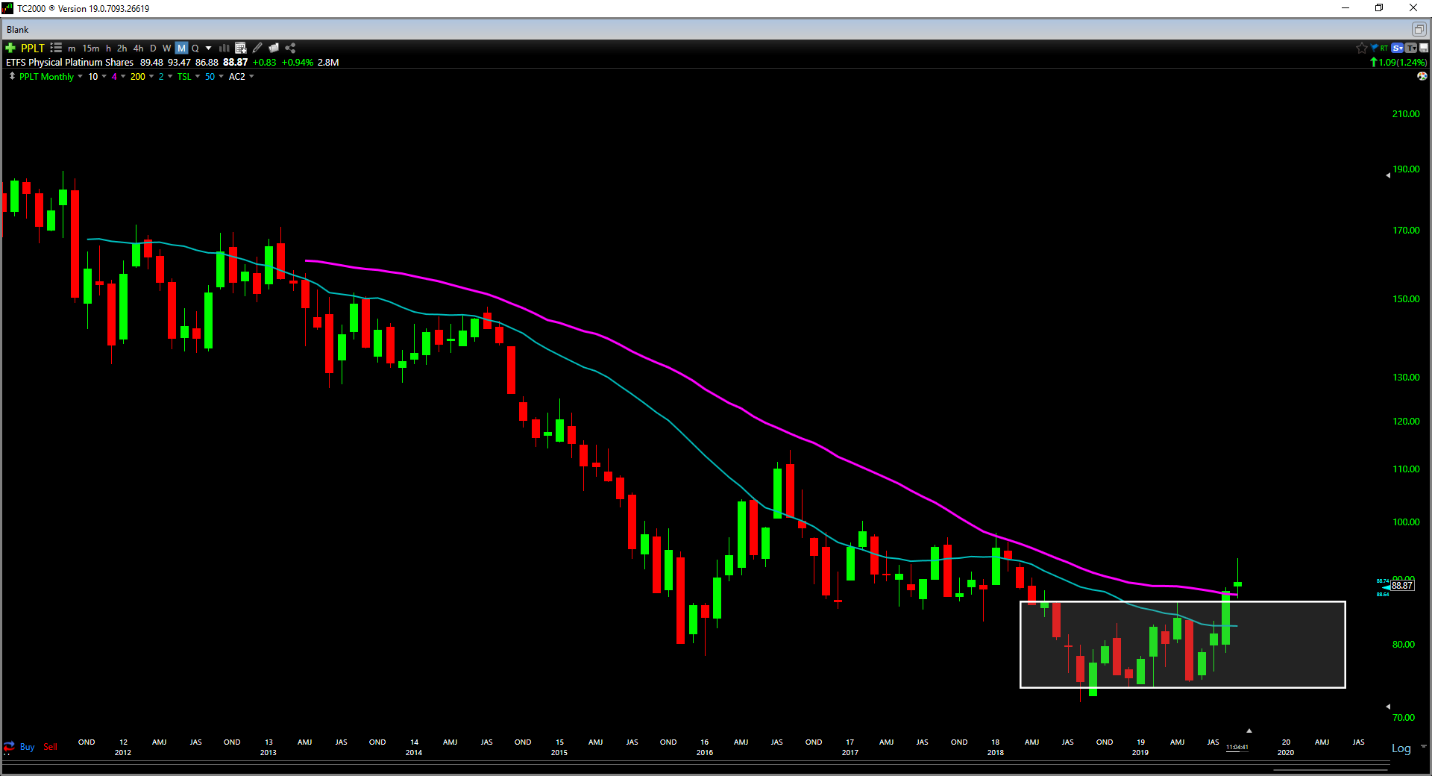 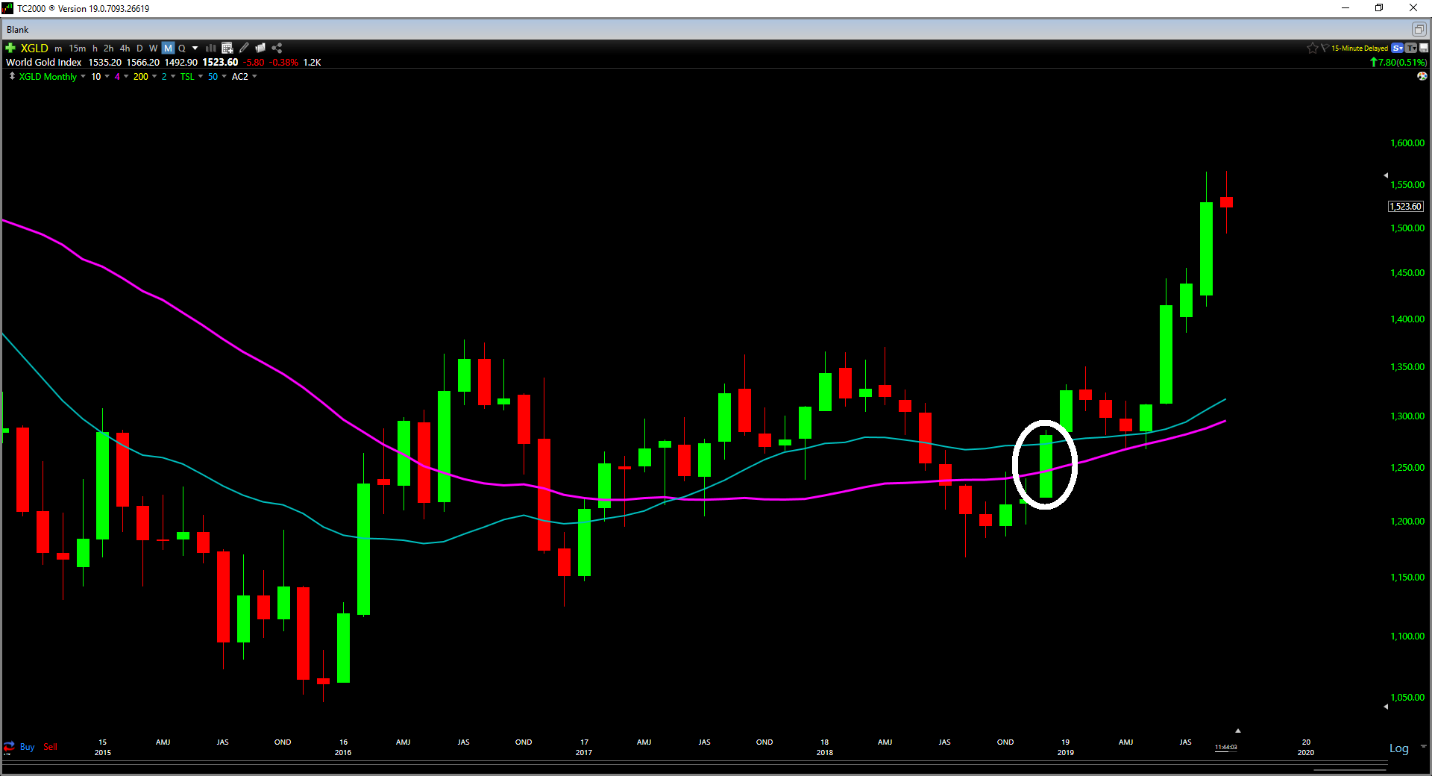 Looking at the signal on gold that occurred on the December 2018 close, the metal pushed higher in January but then traded 3% below the level where this monthly signal occurred three months later. If the Platinum ETF can close above $88.00 for September, we would expect any pullbacks to the $86.00 level or lower to be defended by the bulls. Essentially, this means that if the Platinum ETF closes above $88.00 for September, dips to the $86.00 are low-risk buying opportunities.

Zooming in to the platinum chart below, we can see that the resistance area on the saucer the metal is building comes in around the $85.00 level also. Given the convergence of supports in this area, this is likely a spot where scaling it would make sense to begin scaling into a long position. The 20-month moving average (green line) which sits around $81.00 provides a stop point for the trade. Any monthly close below $81.00 would significantly sour this setup and suggest that this breakout for platinum is a false start. The beautiful thing about this setup, however, is that platinum sentiment remains relatively subdued given its 20% gain the past three months. Bullish sentiment for platinum, based on DSI data, currently sits at 61% bulls. This is well below the levels of sentiment that gold and silver reached after seeing similar moves. Essentially, this is inferring that despite this push higher, platinum is not a crowded trade currently. 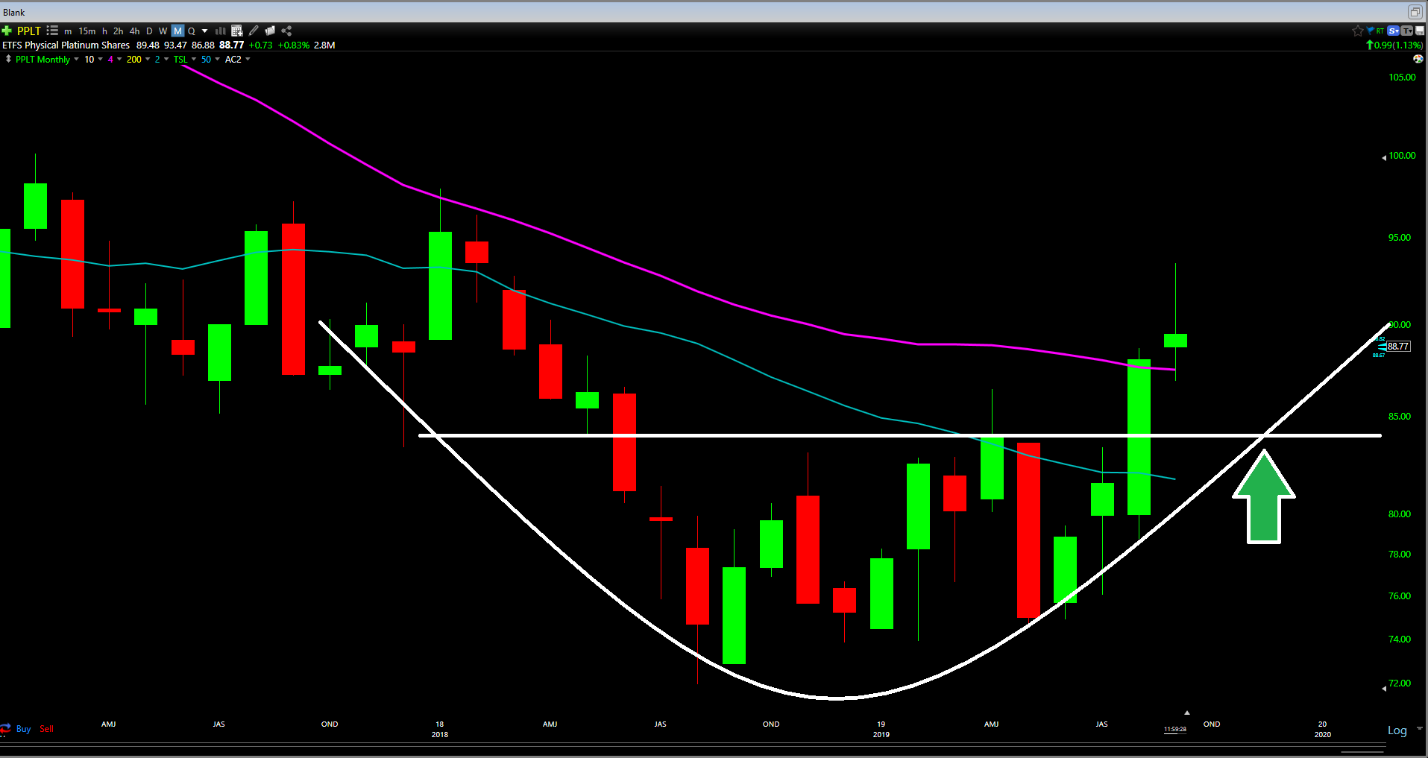 While everyone is busy clamoring on about gold and silver, there is an argument to be made for the inclusion of platinum in one’s portfolio. I certainly would not overweight platinum compared to gold given that gold is the leading commodity, but this recent breakout in platinum suggests higher prices to come in 2020. As long as the bulls can defend $81.00 on a monthly close, they will remain in complete control of monthly momentum. I would view any dips to the $84.00 – $85.00 level as low-risk buying opportunities in the metal.

The Aberdeen Standard Physical Platinum Shares ETF (PPLT) was unchanged in after-hours trading Thursday. Year-to-date, PPLT has gained 0.14%, versus a 13.28% rise in the benchmark S&P 500 index during the same period.

PPLT currently has an ETF Daily News SMART Grade of C (Neutral), and is ranked #12 of 33 ETFs in the Precious Metals ETFs category.