This year, commodity prices have been under pressure from a strong U.S. dollar and trade war fears. This has made a huge dent in the balance sheet of many net exporters of resources, in turn weakening their currencies. However, commodities could be on the rebound and are flashing a massive buy signal.

This should come as a shock to no one, but what most people don’t realize is just how closely some currencies track certain commodities. I have shared several charts that show this correlation over the years at numerous industry conferences. Attendees were always astounded when I got to these slides – and we’re talking professional economists, money managers and CEOs here.

With that said, I think it’s important that you see this correlation as well. Below are five world currencies that have been impacted by lower commodity prices.

Australia is the world’s top iron ore producer and exporter, with usable iron ore output of 880 metric tons in 2017. This means that its income is very sensitive to price changes. As demand from China, the world’s largest consumer of iron ore and top steel producer, has softened, so too has the Australian dollar.

The fifth-largest oil producer in the world is Canada, with an average production of 4.59 million barrels per day in 2016. Oil accounts for almost 11 percent of the nation’s exports – almost all of which is sent straight to the U.S. The strong correlation between the Canadian dollar and oil prices is largely due to crude oil being the largest single contributor of foreign exchange to the nation. Should oil prices continue to rise, so too should the Canadian dollar.

Compared to Canada and Australia, Russia’s export mix isn’t nearly as diversified: about half of its exports in terms of value are a combination of oil and natural gas. (Russia sits atop the third-largest oil reserves in the world and the number one natural gas reserves.) It should come as no surprise, then, that its currency is highly influenced by the price of crude. When oil fell in July 2014, so did the ruble. However, the ruble and crude decoupled in early 2018 when the U.S. imposed sanctions against the Eastern European country for its alleged meddling in the 2016 presidential election. 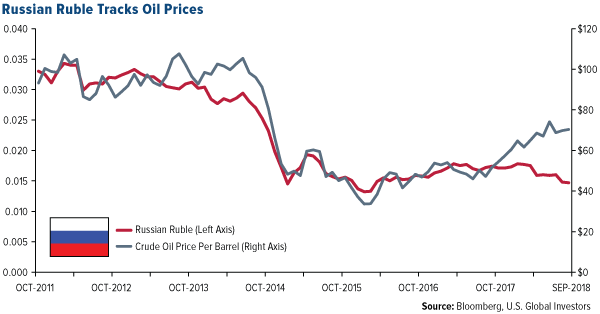 The same story can be found in Colombia, where oil exports are responsible for about 20 percent of government revenue and 25 percent of total exports. Although oil exports fell from $12.7 billion in 2015 to $8.26 billion in 2016, production exceeded targets in 2017 with an average 854,121 barrels per day. As Venezuela’s economy falls further into disarray, Colombia has taken its place as the number five exporter of oil to the U.S. – one of the world’s biggest markets.

Copper is Peru’s most important mineral export by value, amounting to 24 percent of exports in 2016 worth $8.77 billion. With around 81 million metric tons of copper reserves, it’s the second-largest producer after Chile. As such, the Peruvian sol has declined in tandem with the red metal. How familiar are you with the world’s currencies? Test your knowledge in this interactive quiz!