Stocks erased their weekly gains and bond yields fell on Friday as investors reacted to a number of economic developments. Chief among them were a Treasury yield curve inversion, the first since before the financial crisis, and continued slowdown in the pace of U.S. manufacturing expansion.

I had my eye on several other market-moving news items, some of which I share with you below.

The price of palladium briefly topped $1,600 an ounce for the first time ever last week on a widening supply-demand imbalance. Markets sent the metal higher on news that Russia, the world’s number one producer of palladium, was set to ban the export of scrap metal, which would have the effect of squeezing global supply even further. This comes a week after car manufacturers signaled an increase in demand for palladium, which is used in the production of pollution-scrubbing catalytic converters.

As such, the palladium-to-gold ratio–or the measure of how many ounces of gold can be purchased with one ounce of palladium–is now at an historical high. 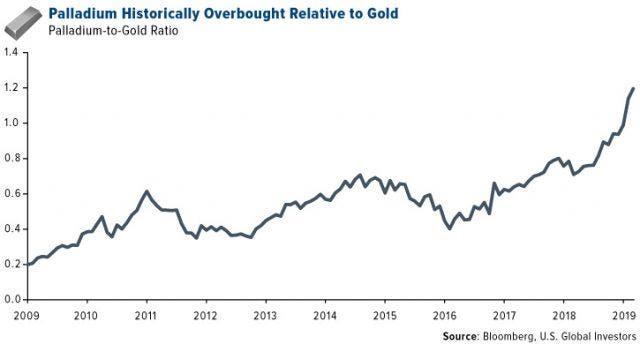 Palladium is the best performing metal so far in 2019, up nearly 27 percent. In second place is nickel, which is facing supply issues of its own. Global demand for nickel in 2019 is estimated at around 2.4 million metric tons, two thirds of which will be processed in stainless steel mills, mostly in China, according to Reuters.

PALL currently has an ETF Daily News SMART Grade of C (Neutral), and is ranked #19 of 35 ETFs in the Precious Metals ETFs category.