Yesterday (Monday), gas futures climbed up 10% in early trading – the biggest rise in two years. The benchmark price for oil rose more than 2%.

The market reacted on news over the weekend that Russian gas-export monopoly Gazprom threatened to terminate its natural gas discounts to Ukraine if the former Soviet republic doesn’t pay off its alleged $1.55 billion heating fuel debt – a scary prospect, historically.

In January 2009, Gazprom shut down its supplies to Ukraine over a contract dispute and other accusations, leaving over a dozen European countries without their expected gas supplies. The two week shutdown, during a period of frigid temperatures, left factories unable to produce and raised gas prices worldwide.

Any pressure on the Russian and Ukraine gas pipelines affects gas prices globally, because Russia is the world’s largest oil and natural gas exporter. It’s the second-largest producer of natural gas after the United States, and the biggest European supplier of natural gas.

And much of Russia’s natural gas passes through the Ukraine – a transit point that supplies about 16% of European demand. 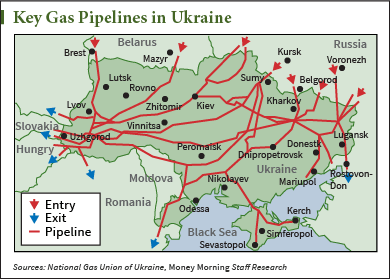 But times have changed.

Despite the conflict between Russia and Ukraine, there are now mitigating factors that will help to stabilize gas prices, even if the Ukraine gas pipeline is disrupted…

First, Europe has slowly reduced its dependence on Russian gas over time. Ten years ago, Gazprom accounted for 50% of Europe’s natural gas supply; now, it accounts for less than 30%.

The two countries that stand likely to be most affected by Ukrainian gas pipeline disruption are Germany and the Netherlands because bad energy policies had already heightened prices in those markets.

Second, European inventories are looking good. They sat 49% full as of March 2, up from 37% a year ago according to Gas Infrastructure Europe.

This year’s mild winter – the third-warmest since 1981, according to MDA Information Systems LLC – left Europe with enough natural gas in storage to buffer Ukrainian flow disruption for about 45 days.

Third, Europe has worked to improve gas infrastructure such that it could use alternative routes if Ukraine’s gas pipeline is disrupted.

And finally, U.S. exports of LNG could mitigate shortages in Europe. The U.S. Department of Energy has approved six proposals to export LNG to countries without free trade agreements (FTAs).

Combined, the projects amount to 8.5 billion ft3/d of LNG – compared to 6 billion ft3/d that Russia exports to Europe via Ukrainian gas pipelines.