Chris Georgopoulos: Without question the most popular model to predict market crashes is the VIX, commonly referred to as the “Fear Gauge,” a market index that measures the implied volatility of the S&P 500 index options. Its concept is quite simple, when the uncertainty and fear among investors rises, they commonly run to the S&P 500 options to either hedge or speculate. The increased interest in the options usually leads to higher premiums and as the premiums increase so does the VIX. However, predicting the future isn’t 100% accurate, most of the time it’s not even close. Every forecasting model has its flaws and the VIX is not an exception. There are many problems skeptics have found with the VIX such as; its population study is limited to only the 500 stocks of the S&P 500 and” {the} model is similar to that of plain-vanilla measures, such as simple past volatility” (Wikipedia). A blog post on sensibleinvestments.com summarized the VIX as “simply an indicator of actual volatility in the market but one that is very sensitive to changes in actual volatility particularly if it is on the downside.” Is there a better way?

An elementary statistics theory states that the larger the population size, the greater the likelihood that the sample will be represented. If markets are graded by the performance of popular indexes such as the S&P 500, why limit a forecasting model’s population to only 500 stocks? The economy has become global; interactions from every corner of the world’s businesses affect every other business. If there is a model that forecasts market direction, should it limit itself to just the largest companies? As for only using a month or two of short term option premiums to garner a prediction, as the VIX does, it seems to limit itself to only a single variable. Instead of short term options premiums and limited samples what if we could measure real-time individual stock trend alerts on thousands of domestic and foreign stocks and ETFs? Or simply what if we analyzed the micro components (every stock) to develop a macro forecast of the market based off trends and risk?

By studying the history of risk alerts from SmartStops.net, an intelligent risk management service, two proven alternatives to the VIX were found. SmartStops.net has developed their own proprietary risk model that monitors the trends and risks to over 4,000 of the most popular stocks and ETFs. If the risks grow on any individual investment SmartStops.net alert their subscribers with both long and short term exit triggers. However not only do these alerts help individual and institutional investors manage specific investment risk, the reviews of the alerts themselves have predictive capabilities. By back-testing every alert that SmartStops.net has issued from their inception versus the S&P 500 performance, there is proof of this and the results speak for themselves.

There have only been 7 days for which the amount of Long-Term Exit Triggers (stop alerts) as a percentage of every stock and ETF covered by SmartStops.net has been over 20%. The subsequent market action of the S&P 500 has averaged a negative return for the time periods of 1 week, 1 month, 3 months, 6 months and a year. The 6 month average return is over -7% and when examined from the absolute lows of the S&P 500, the returns average over -19%. If you remove the knee-jerk market reactions caused by “Flash Crash” on 5-6-2010, the returns are even lower.

Another metric offered by SmartStops.net is their SRBI(tm) (SmartStops Risk Barometer Index); this index measures the current percentage of stocks and ETFs that are in “Above Normal Risk” state (ANR) divided by the 100 day average above normal risk percent. By definition, a stock that is listed ANR experienced a risk alert as its last SmartStop alert identifying a downtrend. Conversely, a stock that is listed in a “Normal Risk State” experienced a reentry alert as its last SmartStop alert indicating trading strength and an upward trend. Back-testing historical SRBI data since inception shows that the repercussions to the market when the percentage of downtrends increases to over 40% of all stocks and ETFs covered are profound. Below you will see that there have been only five occasions where this has happened. In each case the S&P returns for the following year were all negative.

Is this a better way?

Before a concrete conclusion can be determined, the predictive capabilities of the VIX must also be analyzed. For this study the data utilized the same time frames as SmartStops’ data and reviewed two commonly watched scenarios that represent fear among VIX watchers. The first, when the VIX climbs above 40 and the second, the highest closes of the VIX. The results versus the S&P 500 are below. 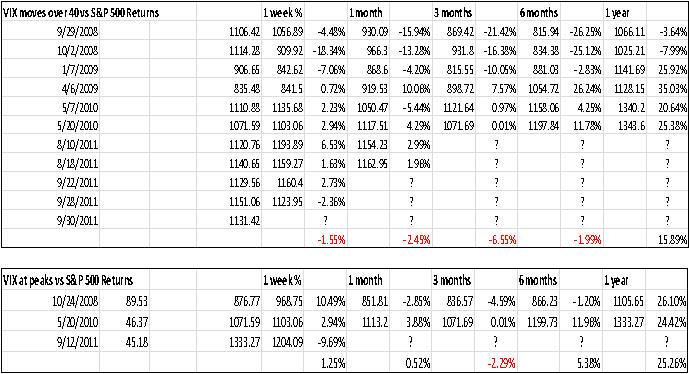 The VIX does have some predictive properties. The returns from one week up to six months following the move over 40 shows on average negative returns. However, these returns are on average are smaller than the returns using either of SmartStops’ models. Even more compelling, when viewed from the pinnacle of fear (while the VIX peaks), it is only accurate on a 3 month outlook. This proves that not only the VIX is inaccurate predicting longer term moves, but is actually a quality contra indicator for one year returns.

Again, is this a better method of gauging a coming market crash?

It’s hard to argue with the data. Every time the LT exit triggers are over 20% of all stocks and ETFs covered for any given day, the market has fallen. Through the review of the SRBI’s data we see that when the percent in the above normal risk state rises to over 40%, the market has also fallen. The performance statistics are even lower if you take into consideration that among the four thousand plus stocks and ETFs covered by SmartStops, some are inverse ETFs. Comparing this data, the results are not only surprisingly accurate, but have confirmed that both of SmartStop’s market- predicting models work together to predict market crashes.

Not only is the data hard to argue with but the losses that followed these alerts could be difficult to manage. The average loss for six months is over 15% and over 14% over a full year, but more importantly if we look at the lowest value intra-day price these losses could have amounted to over 35%! These are simply staggering numbers. Imagine the losses if you were heavily margined? Imagine the opportunity costs? Any investor should always be aware of the overall market and these two models can help predict it.

What does the model say about the near future?

Written By Chris Georgopoulos From SmartStops.net Disclosure:  No positions.

SmartStops.net provides an easy to use web-based service that helps you know how much to invest,  monitors your portfolio and alerts you when any of your stocks or etfs show signs of weakness or are “at risk”.    Risk Alerts are emailed real-time to help you take action.  Daily portfolio monitoring reports allow  you to also set conditional exit trades proactively.

SmartStops new breed of service that more easily and precisely monitors and controls investment risk is powered by the SmartStops analytic engine which  incorporates sophisticated trading methodologies developed over 40 years of trading experience.  Many of the SmartStops methodologies have been used by some of the world’s largest wealth funds for decades.  We help protect our clients’ stock investments with exit oriented solutions – where most investors are underserved by current solutions.  Subscribers’ portfolios are actively monitored for indications of risk using sophisticated and proven analytic models.