One of the best ways to invest in natural gas is the United States Natural Gas Fund (NYSEARCA:UNG).  Momentum is bullish, with the ETF closing on Monday above trend line resistance. The chart looks like UNG is ready to test the top end of a recent range that has encapsulated price action during most of March. Bullish sentiment has also recently increased amongst hedge fund traders.

Monday’s close above trend line resistance is a positive sign for the UNG, as prices are poised to test the top end of the 6-week range near $26.  Support is seen at an upward sloping trend line that connects the low in February to the recent low in March and comes in near $23.90. 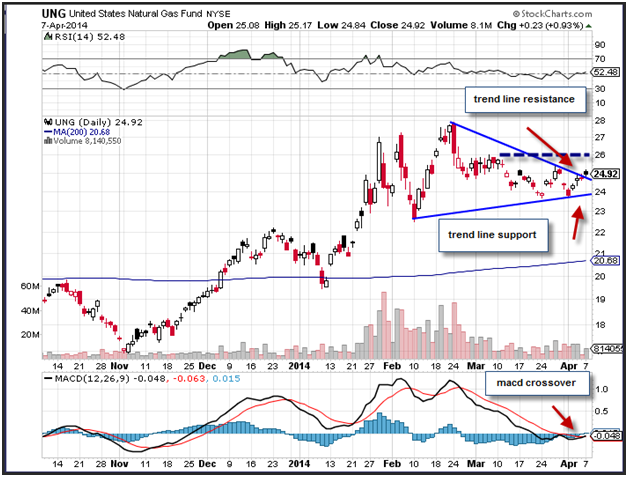 The weekly chart of the UNG shows that prices broke out above the 2013 highs, on very strong volume at the beginning of 2014.  Prices continue to trade above support which was former resistance near $24.10.  Weekly support is also seen slightly below this level near the 20-week moving average at $23.23.

Positive sentiment is building as hedge fund traders purchased natural gas futures according to the most recent commitment of traders report (COT) released by the Commodity Futures Trading Commission for the week ending April 1, 2014. According to the CFTC report, managed money increased long futures and options on futures position by nearly 14K contracts while reducing short position by 2,600 contracts.

Natural gas inventories are at the low end of the 5-year range, according to the latest estimate from the Department of Energy.  Although production continues to make strides, the low levels of inventories might not be sufficient to cushion prices in the event of a warmer than expected summer in the United States.

According to the Energy information Administration, working gas in storage was 822 Bcf (billion cubic feet) as of Friday, March 28, 2014. This represents a net decline of 74 Bcf from the previous week. Stocks were 878 Bcf less than last year at this time and 992 Bcf below the 5-year average of 1,814 Bcf.

The reward potential on a UNG trade favors purchasing United States Natural Gas Fund using a stop that is below trend line support.  Traders who have a short time horizon could purchase the ETF and stop out of their position if the UNG closes below trend line support near $23.75.  The potential short term upside could be the February highs near $28.

This article is brought to you courtesy of David Becker from Wyatt Research.