At least that’s what everyone tells me.

We all know it hasn’t been much fun being an investor in the emerging markets arena this year. The strengthening global economy has put many quantitative easing programs on hold. And the recent tapering of monetary stimulus by the U.S., compounded by geopolitical and financial instability in developing nations, has led to a rapid sell-off since the year began.

And that’s why most investors are staying away from emerging markets like Russia and Russian ETFs. Of course, the short-term risks are remarkably clear. But, the crisis in the Ukraine should not cloud your judgment as an investor with a long-term investment horizon.

I think the famed contrarian investor David Dreman sums up my thoughts on Russia and other emerging markets best.

“[Benjamin] Graham’s observations that investors pay too much for trendy, fashionable stocks and too little for companies that are out-of-favor, was on the money… Why does this profitability discrepancy persist? Because emotion favors the premium-priced stocks. They are fashionable. They are hot. They make great cocktail party chatter. There is an impressive and growing body of evidence demonstrating that investors and speculators don’t necessarily learn from experience. Emotion overrides logic time after time.”

The evidence Dreman speaks of resides in studies like investing “by the numbers” guru Mebane Faber’s recent report.

Mr. Faber did the math on returns from buying asset classes beaten down 60%, 70% and even 80%. His findings were impressive, to say the least.

So according to Faber’s studies, if you are a long-term investor there’s lots of money to be made in beaten-down asset classes like the emerging markets.

Investors willing to take near-term losses for the potential for long-term gains should look towards Russian ETFs like Market Vectors Russia ETF (NYSEARCA:RSX).

The risks are greater…but the rewards are significantly higher. And as we have seen all too often in the past, heightened investor fear often leads to incredible investment opportunities.

Right now I think the market is offering us one of those chances. Take a look at the chart below. 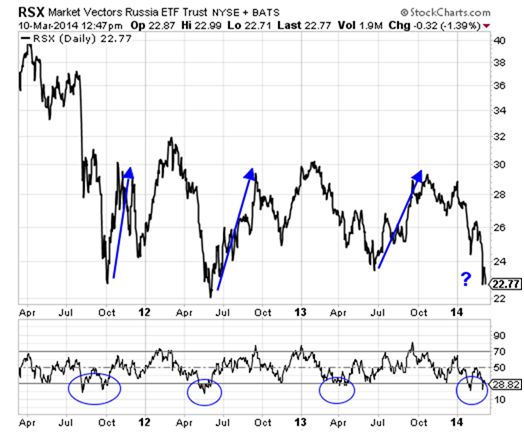 Notice the RSI readings below the RSX chart.

The RSI is an overbought/oversold oscillator that compares the performance of an equity – in our case a highly liquid ETF – to itself over a period of time. It should not be confused with the term “relative strength,” which is the comparison of one entity’s performance to another.

The blue circles in the chart above indicate each time RSX hit an extreme oversold reading.

After each oversold reading, RSX rallied almost immediately. Some of the rallies – including the latest in July – lasted only a few months. But the gains were there if you were quick enough to take them. However, as Mr. Faber proved in his study, waiting several years after an asset has been beaten down reaps the best and most consistent returns.

RSI is an important tool that allows you to gauge the probability of a reversal. It does not tell you the exact entry or exit point, but it helps you be aware that a reversal is on the horizon.

Since I’m a contrarian at heart, I prefer to buy an index when a highly liquid stock or ETF reaches an extreme oversold state.

So let’s explore ways to take advantage of the oversold reading in RSX. Obviously, you could buy the Russian ETF outright. A round lot (100 shares) would cost you roughly $2,277.

Or you could sell puts. Selling puts requires far less capital…roughly 80% less. Not only that but, you are able to select the price in which you want to buy the stock or in this case the ETF outright. It’s my preferred way to take advantage of extreme oversold readings.

This article is brought to you courtesy of Andy Crowder from Wyatt Investment Research.