On Wednesday, Feb. 16 Israel said Iran is sending two warships into the Suez Canal on way to Syria, and that the action is considered a “provocation.”  Due to the long history of bad blood between Israel and Iran, this very possible scenario was enough to even send the bear-infested NYMEX crude oil futures volume surging midday.

West Texas Intermediate (WTI) on Nymex rose to just below $85, while Brent crude on the ICE futures exchange spiked $2.17 higher to $103.81 a barrel–a 29-month high–widening the WTI-Brent spread to a new record near $19.

Then on Friday, Feb. 18, AFP reported that permission has been granted for Iranian warships to transit the Suez Canal into the Mediterranean.  Canal officials say it would be the first time Iranian warships have made the passage since the 1979 Islamic revolution, while Israel has labeled the Iranian action as “hostile’ and said Israel was closely monitoring the situation.

As the worst Israel-Iran conflict scenario failed to materialize, at the close Friday Feb. 18, Brent crude oil for April settled at $102.79 while WTI for April delivery rose to $89.71, narrowing the spread to $13.11.

Since WTI is lighter and sweeter crude which requires less processing, it has historically enjoyed a $1 – $2 a barrel price premium to Brent crude oil.  According to Bloomberg, the WTI-Brent gap averaged only 76 cents last year.

However, WTI’s premium disappeared about a year ago and in recent days it has been trading at more than a $10/bbl discount to Brent mainly due to rising inventory levels at Cushing OK, the delivery and price settling point of Nymex crude futures (See Chart).  ﻿﻿ 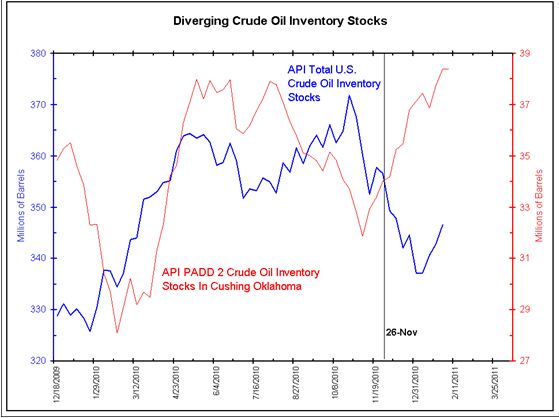 Energy research and consultancy firm John S. Herold noted that from a historical point of view, the Brent premium was often short-lived.  Since the U.S. economy is growing more rapidly than those of most European countries, Herold believes WTI may be undervalued by $12 per barrel as compared to Brent.

Meanwhile, Deutsche Bank thinks the historical WTI premium to Brent may never return and that Brent premium seems to have shifted to a level of $2 to $3 a barrel from the typical historical discount of $1 to $2 a barrel.

For now, between the two oil markers, Brent seems to have the pricing momentum since it is undersupplied, and more likely to be jolted by the geopolitical unrest in MENA (Middle East and North Africa) due to Europe’s close proximity to the region, and the end markets Brent serves.

The problem with Cushing is that The U.S. oil infrastructure is built around the country being an oil importer with pipelines mostly flowing from the coast to inland.

Many analysts don’t see infrastructure could improve at Cushing any time soon to move crude to the coast and world markets, while oil production from Canada and U.S. oil shales like the Bakken play in N. Dakota are set to rise adding to the glut.

Credit Suisse, for example, sees it will most likely be 2013 or 2014 before the pipeline infrastructure could improve the situation at Cushing.

When Brent is higher than WTI, it also drives up the price of low-sulfur U.S. grades that compete with international oils priced against Brent.  The recent spike in Brent has sent the premiums for the Gulf Coast Grades–Light Louisiana Sweet (LLS) and Heavy Louisiana Sweet (HLS) crudes–to the highest levels (above $20) against WTI since at least 1991.

Meanwhile, with the growing disassociation of the WTI to global markets, the domestic petroleum product prices, particularly distillates, have pretty much ignored WTI and are trending more with Brent.  The chart below illustrates this trend where United States Brent Oil Fund (NYSE:BNO), an ETF, was used as a proximate for ICE Brent. 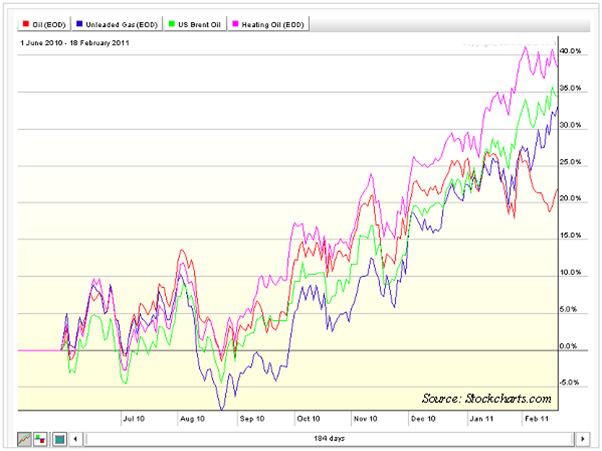 Inland crude in the U.S. is getting cheaper, while petroleum product prices are trending with the higher-priced Brent.  Theoretically, this means higher crack spread for refiners, but not all U.S. refineries can get crude at the low WTI benchmark price.  WSJ quoted Valero (NYSE:VLO) that logistical restraints at Cushing have limited Valero to only about 300,000 barrels of WTI a day. 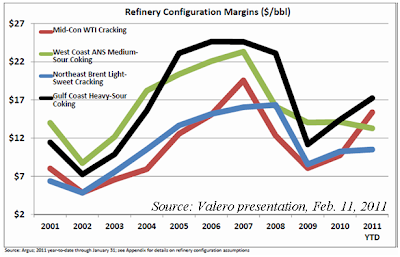 So, only a few Midwest refiners (PADD 2, where Cushing is) with access to Cushing are able to take advantage of this WTI pricing anomaly.  Delek US Holdings Inc. (NYSE:DK), Frontier Oil (NYSE:FTO), Holly Corp. (NYSE:HOC), Western Refining (NYSE:WNR) and Valero (NYSE:VLO) are among the lucky ones that could see higher earnings in coming quarters.

Anybody Got A Big Rig?
Bloomberg quoted Raymond James that producers can ship crude via rail to the Gulf Coast for about $4 to $6 a barrel and by truck for between $8 and $10 a barrel.  Many market players reportedly are using rail and truck shipments to move the glut out of the Cushing to the Gulf Coast where the same barrel of oil would trade at much higher in recent days (see chart below). 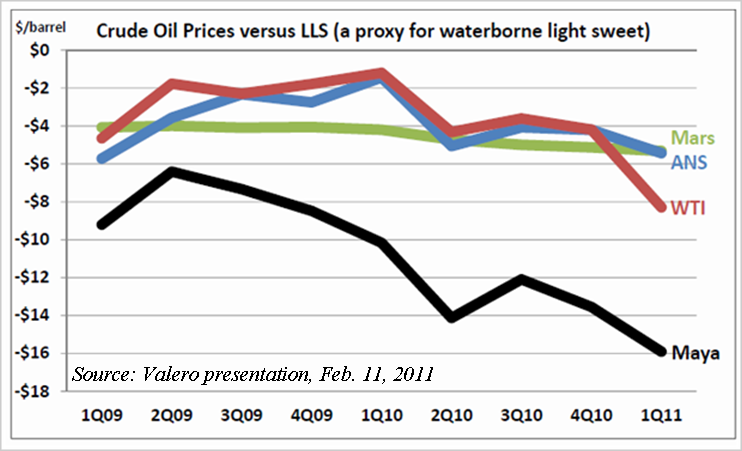 However, the economics of these alternative transportation modes–trucks in particular–would only work if the spreads stay elevated at the current levels.  According to Bloomberg, the WTI-Brent spread between the June contracts already dropped to $9.41 from $11.35 on Feb. 16.  And capacity limit of these alternative transports will be another factor.
ConocoPhillips already said it isn’t interested in reversing the Seaway pipeline that brings crude from the U.S. Gulf Coast to Cushing, Ok.  So, with Cushing storage near 39 million barrels, barging, rail, trucking, and possibly some pipelines reverse flows may help ease the bottleneck at Cushing and narrow the WTI-Brent spread, but they are unlikely to significantly improve the WTI predicament in the next 18 months or so.

Written By Dian L. Chu, Chartered Economist From Economic Forecasts & Opinions
About Dian L. Chu, CPSM, C.P.M., Chartered Economist:  I’m a market analyst, economist, writer and editor of EconForecast (Economic Forecasts & Opinions) blog.
The theory of quantum mechanics and Einstein’s theory of relativity (E=mc2) have taught us that matter (yin) and energy (yang) are inter-related and interdependent. This interconnectness of all things is the essense of the concept “yin-yang”, and Einstein’s fundamental equation: matter equals energy. The same theories may be applied to equities and commodity markets. All things within the markets and macro-economy undergo constant change and transformation, and everything is interconnected. That’s why here at Economic Forecasts & Opinions, we focus on identifying the fundamental theories of cause and effect in the markets to help you achieve a great continuum of portfolio yin-yang equilibrium.