Jordan Roy-Byrne: It was Bob Prechter of Elliott Wave fame, likely among others who noted that correlations between all asset classes are quite strong during a Depression. This is true in a cyclical sense but not in a structural sense. Stocks tumbled in the 1929-1941 period while commodities, led by Gold (NYSEARCA:GLD) and gold producers (NYSEARCA:GDX), increased in value. We’ve experienced similar phenomena in the past 12 years. Cyclically, there has been a correlation between these asset classes. Structurally, stocks have been in a bear market and resource sector has been in a bull market. The driving force has been a weak economy and bear market which usually leads to more inflationary policy, which in turn benefits the resource sector. Are we soon to see a replay of this scenario?

Despite unprecedented monetary inflation, stimulus and bailouts, the economy has barely recovered. The chart below (from Doug Short) displays post-war real gdp growth. The black line shows the 10-year average which has been in a steep decline since 2006. At the time, the Bush II recovery was the weakest on record. It has been surpassed by a pathetically weak recovery (statistically) under Obama. The growth rate in each of the past seven quarters has been below the the 10-year moving average. 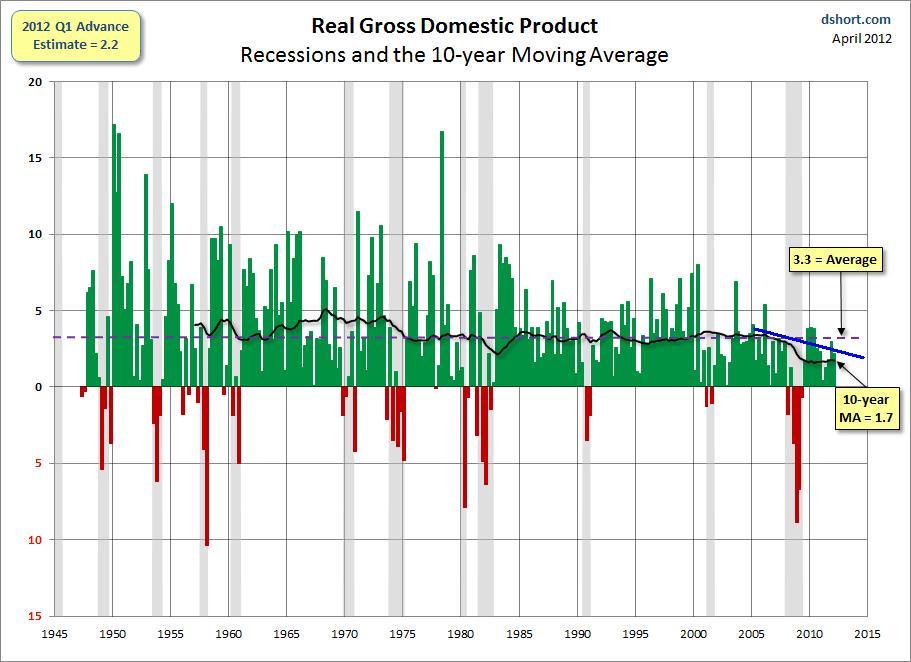 Meanwhile, economic data as a whole is okay but is currently failing to meet expectations. The Citigroup Economic Surprise Index, (economic data relative to expectations) has gone negative for the US, and the rest of the world is not far behind. Clearly, continued disappointing economic data combined with any weakness in equities would prompt more Fed action. Judging from what happened in 2010 and 2011, it is a near certainty. 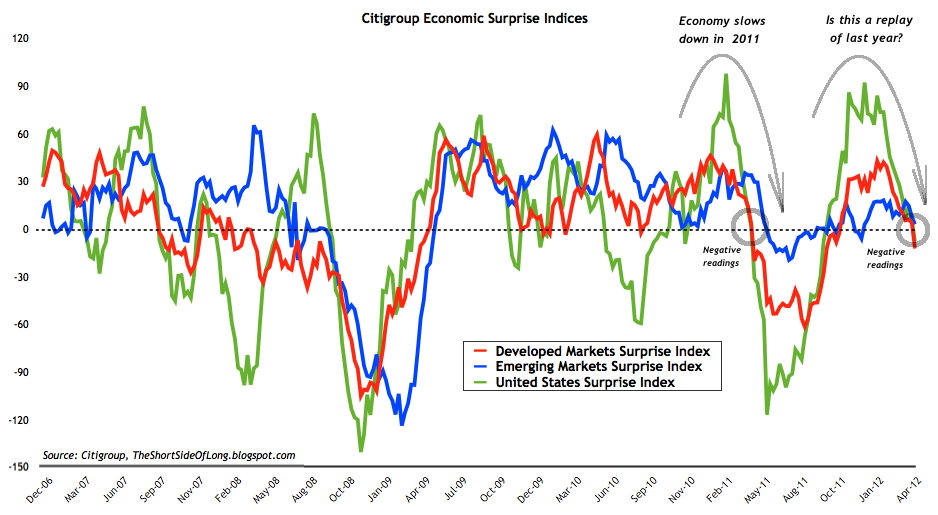 It is important to note the current position of the markets in contrast to a year ago. Currently, precious metals are bottoming while equities are nearing multi-year resistance. This decoupling, shown in the chart below, began in the aftermath of the mini-Euro crisis. 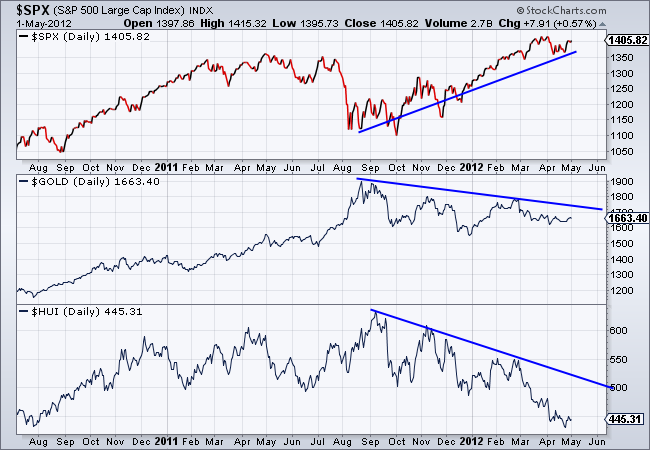 Other than 2001-2002, we haven’t seen an extended period of decoupling between precious metals and equities. However, that doesn’t preclude the possibility in the coming years. In fact, there are two cases of a decoupling during the 1970s. In the chart below we graph the S&P 500 (blue) and the Barron’s Gold Mining Index (red, and scale numbers adjusted). 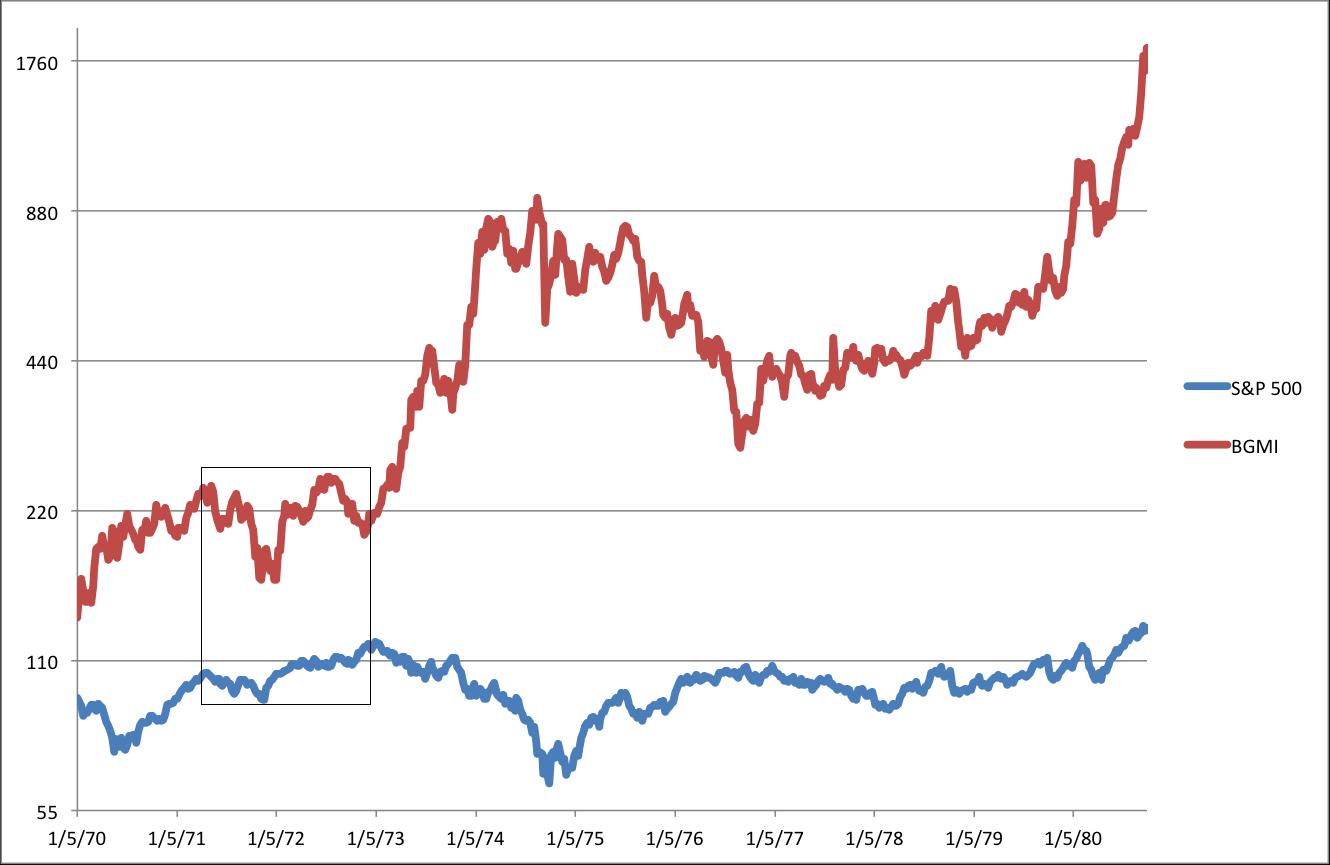 The period from 1971-1972 bears quite a bit of resemblance to 2011-2012. The S&P 500 (blue) continued to make new highs while the gold stocks (red) remained in a long-term consolidation that included two corrections. However, decoupling would soon benefit the gold stocks as they rose more than 4-fold in less than 18 months. Oh and during that period, the S&P entered one of its worst bear markets on record. Finally, note that the next major bottom in the gold stocks in 1976, coincided with a top in the S&P 500.

The current decoupling of precious metals and equities combined with an unsustainable recovery provides insight into the future. With equities nearing major resistance and precious metals emerging from an important low, it is obvious which asset class is in position to benefit from disappointing economic data and which asset class could enter a mild cyclical bear market. Equities have already experienced two nasty bear markets and two recessions. Though still in a secular bear, the likely outcome of the next few years is far more likely to be something on the order of the late 1970s and not the mid 1970s.

The combination of the failure of equities to make new highs and continued disappointing economic data would likely serve as a catalyst to ignite the precious metals sector while equities could enter a situation similar to the late 1970s. The potential struggle of equities combined with a resurgence in precious metals will ultimately attract the hot money inflows that we have not seen since 2006-2007. If you are a serious investor and you’d be interested in profiting from this development from 2012-2014, then we invite you to learn more about our professional service.