The platinum group metals (PGMs) are six metallic elements clustered together in the periodic table: platinum, palladium, rhodium, osmium, iridium, and ruthenium. They have similar physical and chemical properties and, for the most part, tend to occur together in the same mineral deposits. Every one of the PGMs have superb catalytic properties. They are highly resistant to wear and tarnish, resistant to chemical attack, and are stable at high temperatures and in electrical applications. In a word, they are highly desirable for use in a number of industries.

I want to concentrate on palladium as the “dessert” I am most interested in while digesting our gold and silver gains, simply because it has the most established track record for industrial applications I see as essential to development of the world’s economies. But a few words in passing about platinum are in order, since few of us have seen or worked with palladium but many of us own or have seen platinum (“white gold”) in jewelry. (This is changing, however, with Stillwater Mining (NYSE:SWC) and a number of wholesale and retail jewelers working together to market palladium jewelry.)

South Africa is still the undisputed king of the world’s platinum producers, with something like 80% of all international production (and closer to 90% of the currently economically recoverable reserves.) I need to debunk a notion, foisted upon investors by those screaming headling, “Secret Trillion Dollar Property Owned by Penny Stock!” ads you might receive from newsletter writers with little research and less scruples to back up their claims. The world is not about to run out of platinum. According to a fine report from precious metals fabricator and dealer Johnson Matthey (available here):

There are enough platinum group element deposits in the Bushveld Complex in South Africa to supply world demands for many decades or even a century using current mining techniques. Demonstrated reserves and resources published by mining companies make detailed calculations up to a maximum of about twenty years ahead, but there is abundant and adequate geological evidence that these deposits continue far beyond where mining companies have proven according to rigorous international reporting codes. For each 1 km of depth into the Earth in the Bushveld Complex there is in the order of 350 million oz of platinum. For comparison, annual production of platinum from the Bushveld Complex currently is only around 5 million oz.

The problem isn’t the size of the reserves. The problem is what it takes in effort, energy, and costs in dollars or rand to get the stuff. Platinum is never easy to process; it takes about 10 tons of ore from the ground to refine just one ounce of the metal. As a result, world platinum production typically totals about 1% of the amount of silver produced annually, and less than 10% of the amount of gold. Maybe half that platinum, in small quantities, finds its way into catalytic converters to transform toxic emissions from internal combustion engines into more benign by-products. Most of the rest, ex stockpiling, gets used in jewelry. Impala Platinum Holdings (IMPUY.PK) and Anglo Platinum Limited (AGPPY.PK) are two relatively pure plays in platinum.

While nearly half of platinum product goes to jewelry and another quarter to automotive catalytic converters, half of palladium finished product goes to catalytic converters and another quarter to electronics and dental applications. Assuming these trends continue, I’d rather be in palladium. The world’s appetite for automobiles for transportation, electronics (cell phones, laptops, LCD TVs, iPods, DVD players, etc.) to make their lives easier, and dental applications as more people worldwide seek a higher level of dental and medical care, all augur for greater growth in this area. The jewelry industry’s push to market more palladium jewelry (another 14% of usage) is merely the icing on this white cake.

Illustrating the potential for increased usage of palladium for the automotive market are these two charts, courtesy of ETF Sources: 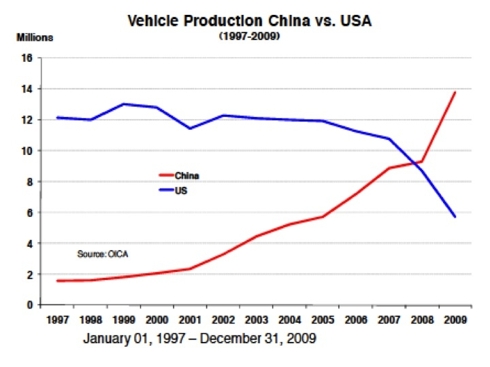 While the growth in China looks impressive (and will likely be matched in India, Brazil and other emerging markets), we need to realize just how low the actual market penetration is — yet already the numbers are staggering! 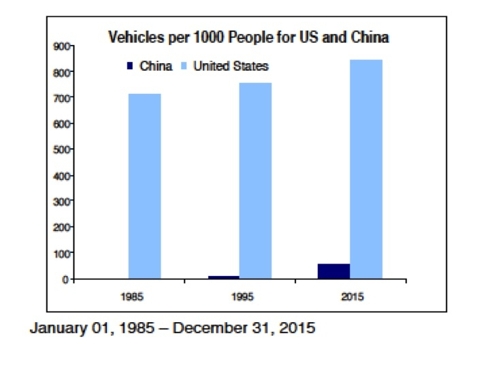 With growth in the likelihood of automobile production this fast-growing, and the likely use of increased palladium growing apace, where might the world find enough palladium to fill this need in a timely manner?

I refer you to Stillwater’s website, which shows the current production geographically, reaching the (self-serving) conclusion that sources beyond North America – where Stillwater is the Big Kahuna – are politically less stable or secure: 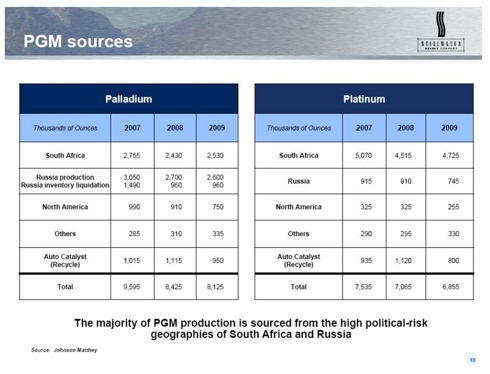 Whether you agree or disagree with SWC’s political assessment (I happen to agree,) one point is unimpeachable: the source for palladium titled “Russia inventory liquidation” is about to dry up and blow away. I outlined the demand situation above, with increased auto, electronic, dental and jewelry usage. The supply situation is about to be affected hugely, with some 12-15% of the supply abruptly declining. Here’s why: Russia’s Norilsk Nickel (NILSY.PK) is currently the largest palladium producer in the world, producing about 2.5 million ounces of palladium annually. But two factors argue against a continuation of this dominance.

First, Norilsk’s palladium production isn’t enough to meet rapidly growing demand even now, so Russia fills the deficit from Russian palladium stockpiles, built up over the years. These stockpiles are known to have been falling as have the amounts sold on the export market. The most likely reason is that the stockpiles are nearing depletion and the government has chosen to keep what remains for strategic reasons rather than allow Norilsk to act as agent for their sales. If this is so, then global demand will be more dependent on mine production.

Second, because it is incredibly polluting, Norilsk is under heavy pressure to stop using its highly-polluting high-temperature-required smeltering processes to separate the more stable palladium (and platinum) from its nickel ore operations. Since the nickel is less valuable per ounce but incredibly more valuable because of the sheer tonnage available, if Norilsk bows to pressure from the government and citizens living near their properties to change from the high-temperature process that allows for the separation of PMGs from the nickel to a chemical leaching process that does not allow for the removal of “impurities” from the nickel in a cost-effective manner, that source of PMGs will be gone, as well.

If both these events occur, which seems likely, then it will be a double-whammy to the supply side of the supply / demand equation. Between the two, we’re talking about a 30-40% dent in supplies at a time when demand is rising globally.

Palladium isn’t cheap. The price of both platinum and palladium have moved up in concert with other precious metals over the last couple years: 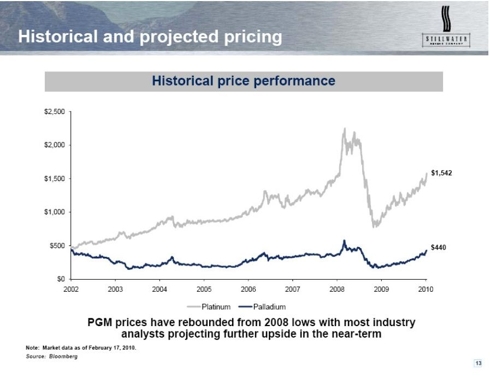 Regrettably, this long-term chart, while showing the Decline of Everything in 2008, and the recovery of PMs and the PMGs in 2009-2010, doesn’t show the most recent data. Palladium still enjoys a pricing advantage, but of slightly less than 2:1 rather than the 3:1 differential in the February 2010 chart above – as seen in today’s price, courtesy of Mineweb.com:

We have three favorite ways to play an increase in palladium demand / decrease in supply. We also note that there are venues we use only for our most conservative clients, like purchasing shares of the Physical Palladium Shares ETF (NYSE:PALL). Investors using this venue will benefit from any increase in the price of the metal itself. Other ETFs and ETNs dealing with the Platinum Group Metals include the ETFS Physical Platinum Shares (NYSE:PPLT), the iPath DJ-UBS Platinum ETN (NYSE:PGM), the UBS E-TRACS Long Platinum ETN (NYSE:PTM) and First Trust ISE Global Platinum (NYSE:PLTM).

But for most clients, and ourselves, we are buying instead three favored firms that provide operating efficiencies that result in additional leverage to the price of the physical metal.

Stillwater Mining does it all – and does it right here in the USA. It mines for, extracts, processes, refines and markets PGMs, especially palladium from two primary properties in Montana, and also recycles used catalytic converters. In addition, just this month, SWC acquired Marathon PGM Corp., an exploration firm with newly-proven reserves in the Thunder Bay region of Ontario.

North American Palladium (NYSE:PAL) is a Canadian PGM producer whose primary asset is the Lac des Iles palladium mine in northwestern Ontario, but also has promising reserves at the Sleeping Giant gold mine in northwestern Quebec, and several exploration properties in the Abitibi region of Quebec. Like SWC, however, PAL trades on US exchanges.

The smallest and most speculative of our favorites is Platinum Group Metals Ltd. (NYSE:PLG), which is still an exploration and development company. Its primary properties are well-located, however, just north of the famous Bushveld Complex in South Africa and in the same regions that SWC and PAL are currently successfully working in Ontario, specifically contiguous to PAL’s Lac Des Iles project.

Let me leave you with two final points. One is best shown in the following Johnson Matthey graphic, showing in picture form the reasons why I believe palladium is the more attractive of the two primary PMGs: 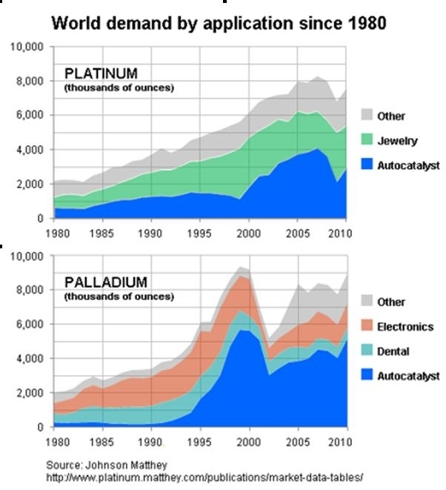 And lastly, this. While it may be “pie in the sky” right now, the synergies from the following empirically verifiable reality may one day provide palladium from what many would think the most unlikely of sources. Significant quantities of the three light platinum group metals — Ruthenium, Rhodium and Palladium — are formed as fission by-products in nuclear reactors. With tightening supplies and increasing demand, reactor-produced palladium is emerging as an alternative source of the metal. Wouldn’t the irony be supreme if the energy source many have vehemently derided and rejected, atomic power, turned out to be the answer to yet another of our most vexing environmental pollution issues?

Disclosure: We and/or those clients for whom it is appropriate are currently long PALL, SWC, PAL and/or PLG.