Maurice Jackson: Joining us today is Chris Vermeulen of Technical Traders. Today, we will be discussing why you should consider platinum in your portfolio.

Chris, we’re delighted to have you on our show today to discuss a topic that really resonates with me, and that is platinum. Before we begin, tell us about Technical Traders.

Chris Vermeulen: I started trading when I was 16, and I’ve been trading almost full time for 21 years. Started in high school and traded through college. Eventually, my goal was to trade full time. I wanted to run a newsletter and help other traders. Technical Traders just evolved over the last 21 years. It’s all I do. We have a newsletter and a big following, with users in over 87 countries. I help traders learn to trade and spot opportunities, and I share every trade that I do with subscribers.

I’m a pure, technical analyst. I think I’m as pure as they come just because I do not watch or read news. I don’t follow earnings. I could care less of what’s going on in the world. I pretty much turn on my trading system, and I look at the charts. To me, it’s just the video game, the ultimate game of play the bars, play price action, momentum and strictly, I’m just trying to pull money of the market. So I’m 100% technical analyst, and I don’t let anything work into my analysis other than that.

Maurice Jackson: We’re delighted to hear your perspective because we look at things more from a fundamental standpoint, so it’s good to hear what your thesis will be here. Chris, speculators and investors in this space usually are gold-centric, to a varying silver-centric, and they overlook the platinum group metals. For someone new to technical analysis, share with us what is the COT, and how does that influence your thesis?

Chris Vermeulen: The COT is the Commitment of Traders. All it really is, you can actually see it on FINVIZ website if you pull up platinum chart. You’ll see underneath that they show the COT. It really is just telling you who the big players are. There are commercial traders, large traders and the small, speculative traders. What I look for on the COT data is when these bands pinch, the level of large traders, their positions in platinum. I look for those to drop down. I look for the large commercial hedge positions to start to get back to neutral. They’re usually always negative because they have to balance out all the positive trading positions. Usually what happens is when the COT data pinches, meaning there isn’t a whole lot of direction, people aren’t really long or short, that’s usually a sign where the market is getting ready to have another move. The COT data recently has been slowly moving, pinching to get to a very neutral position on platinum. And platinum has been fading down into a support zone. There’s a lot of technical things coming into play here, where I think we’re ready to see a pretty big pop, a significant pop and rally in platinum sometime this year.

Maurice Jackson: Share your thesis with us regarding the technicals for platinum and why it has your interest. 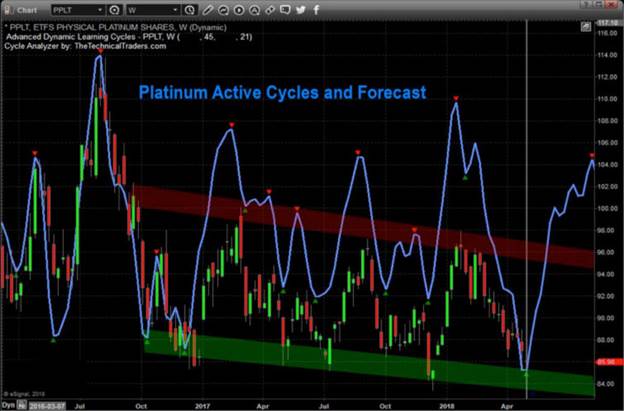 Chris Vermeulen: The big driver, what really got me excited about platinum is that I use a lot of cycle analysis, and I’ve created my own cycle indicators to follow various time frames on the market. When you go back in time and you look at what platinum did back in 2007, 2008, and we look at the price action now at what platinum is doing, and I overlay my cycle analysis, when I look on the chart of platinum, on the weekly chart, we’ve got more or less another week or two potentially of platinum being a little bit under pressure here. 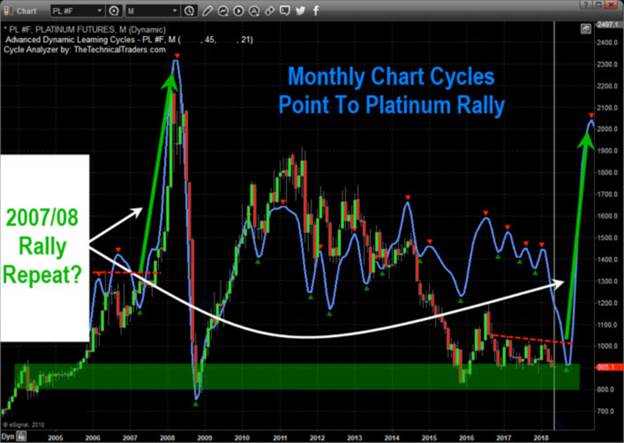 Pretty much all the metals are trying to bottom. But then we’ve got a major cycle to the upside, meaning, we should see platinum rally for probably 6 to 12 weeks after we bottom out here. The cycle looks very strong. If this rally is strong enough, it’s actually going to break platinum out of this downward channel that it’s been forming, and we could see an explosive move similar to what we saw in 2007, 2008, which is huge rip-your-face-off type rally, where is just explodes, and everyone gets excited about platinum, much like the bitcoin pop that we saw in December and January. It’s that type of euphoric stage where we could see platinum do that same type of thing again because the monthly cycles show a huge upswing, multiple cycles coming together, forming a very powerful move.

So the cycle analysis, it has me most excited about platinum. Because the cycles are aligning with what I think is the late stages of a bull market in stocks and when you look at the price activity and formation of platinum, gold, silver, mining stocks, they’re showing signs that there’s life, that there is something big brewing. So I’m really excited of the timing of this year for precious metals. I think this is a major platform for pretty much all of them to take off and start a new bull market that could last quite a while.

Maurice Jackson: Not to digress here, but recently, you saw a similar pattern in palladium. Share the similarities with us.

Chris Vermeulen: Palladium, it was a long-term chart, looking at the monthly chart going way back to 2000, 2001. A lot of people avoid the monthly charts,. They don’t look at them. The monthly charts are actually extremely powerful when you have a setup. In most cases, it takes many years for a monthly chart to have a big setup. Palladium had a beautiful rally in 2016, 2017. This year, it came right up and hit the high that it hit back in 2000, 2001. It hit it in a way that the market rallied very quickly up to that level month after month for almost a year straight. When price rallies very quickly, it hits a very significant resistance level. Usually, you have a knee jerk reaction sell-off the first time it hits that level. That’s exactly what happened. We were telling our followers this is it. This is a massive pop in the resistance going back 18 years. We should see a one to three month sell-off very quickly. You can swing trade it, momentum trade it. There’s a lot of plays here. Of course, we saw it fall to 19 percent right after that post, and it’s trying to recover now and put in a bottom.

The monthly charts are extremely valuable to those who want to step back and look at those bigger pictures because they can provide some of these trades that are almost a no-brainer. You can go at it, and you can short the metal or you can buy an ETF around it. But now the market is resetting. We’ve had that pull-back. It’s basing its trading at somewhat of a short-term support level. Metals here I think are setting up for another rally, including palladium.

Maurice Jackson: Chris, you survived the storm. Last question here for you. What did I forget to ask?

Chris Vermeulen: The biggest thing here is the dollar, what the U.S. dollar index is doing. The dollar the last month has been on a tear, ripping to the upside. You look at all the other currencies. They’ve all been pouring out and bleeding out. It’s just red bar after red bar. So there’s something big at play going on here, where money is flowing into the U.S. dollar and out of all the other currencies. To me, the fact that they’re all moving down, it feels like there’s something really big brewing that most of us don’t know, but big, big country players like mega investors might know about because why are they fleeing every currency and moving into the dollar? It’s almost like there’s some type of big financial crisis or something brewing. That’s the one thing that has me worried, but the nice thing is, precious metals should be the safe haven when everything hits the fan. That’s the one big wild card of what’s going on.

The dollar is at resistance right now. Hopefully, it’ll pull back or consolidate because it is putting some downward pressure here on metals, but in the grand scheme of things, I think we could see metals and the dollar actually play as a safe haven together and could push forward when the next big crisis hits, depending on what type of crisis hits the market. Every bear market in stocks happens for some type of reason, and it’s always something totally different. Everybody says well, this time, it’s different. Well, yeah. It’s always different. But a bear market is a bear market. When fear hits the market, we see money move into the safe havens like the dollar and precious metals. So it’s going to be interesting to see what happens with the dollar, but I am very bullish on metals going forward. I think something big is brewing that is going to spark a rally in precious metals that we haven’t seen in a long time.

Maurice Jackson: As a reminder, we are licensed to buy and sell precious metals through Miles Franklin Precious Metals Investments. The website is www.milesfranklin.com. Are we biased? Absolutely. We practice what we preach. We have been aggressively adding to our platinum positions. If you want to buy or sell precious metals, email us at [email protected]

Last but not least, please visit our website www.provenandprobable.com where we interview the most respected names in the natural resource space. You may reach us at [email protected].

Chris Vermeulen of Technical Traders, thank you for joining us today on Proven and Probable.

The ETFS Physical Platinum Shares (PPLT) was unchanged in premarket trading Wednesday. Year-to-date, PPLT has declined -1.79%, versus a 0.02% rise in the benchmark S&P 500 index during the same period.

PPLT currently has an ETF Daily News SMART Grade of B (Buy), and is ranked #9 of 32 ETFs in the Precious Metals ETFs category.