From Zacks: Brazil’s Finance Minister Henrique Meirelles expects a lower economic growth rate for 2017. He expects the GDP to grow 2% year over year in the fourth quarter compared with the earlier estimate of 2.7%. Therefore, the full year average is expected to be slightly less than 2%.

Meirelles stated that the lowered outlook is because of the recent political crisis that inundated Brazil. President Michel Temer was accused of accepting bribes from meat-packing company JBS. Earlier this week, corruption charges were brought against him by the prosecutor general of the country (read: Should You Buy Brazil ETFs After Brutal Sell-Off?).

Consumer prices in Brazil rose 3.6% year over year in May 2017 compared with a 4.08% in the previous month. Moreover, the central bank cut its key benchmark rate for the sixth straight time in May. It was reduced by 100 basis points to 10.25%.

iShares MSCI Brazil Capped ETF (EWZ – Free Report)
This fund is the most popular ETF providing exposure to Brazilian equities. It focuses on the most liquid companies in the large-cap segment.

Below is a chart, comparing the year-to-date performance of the three funds. 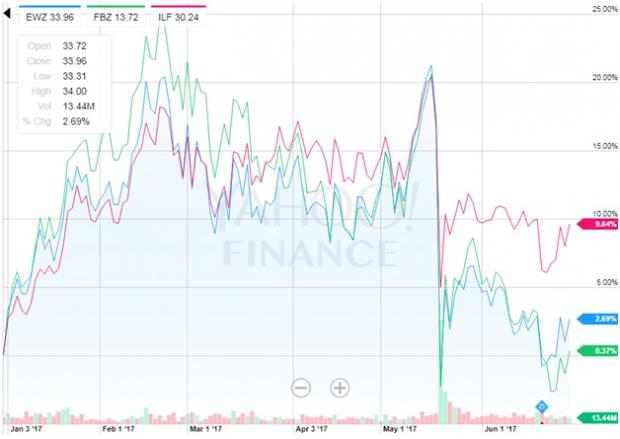 The iShares MSCI Brazil Index ETF (NYSE:EWZ) was unchanged in premarket trading Monday. Year-to-date, EWZ has gained 2.40%, versus a 8.17% rise in the benchmark S&P 500 index during the same period.

EWZ currently has an ETF Daily News SMART Grade of C (Neutral), and is ranked #10 of 23 ETFs in the Latin America ETFs category.