Copper and nickel are two metals modern society cannot get enough of, but there is not enough to go around, says Rick Mills, publisher of Ahead of the Herd. Add in mounting production costs and you have a supply-and-demand disaster in the making. But when it comes to making fiberglass and aluminum, Mills says in this interview with The Metals Report that he sees a revolution in the making, and its name is anorthosite.

The Metals Report: Rick, you have concerns about supply problems for many industrial metals. Let’s start with the importance of copper and nickel to global growth.

Rick Mills: Modern society would grind to a halt without copper and nickel. Nickel has more than 100,000 applications. Copper is everywhere as well. But growing structural imbalances in the supply-and-demand equation do not bode well for future resource extraction. Mining is extremely capital intensive. The initial capital expense (capex) of building and developing a mine is high.

TMR: Production costs have been high for a while. Why are you so concerned now?

RM: Copper has become especially capital intensive. The low-hanging fruit has been mined. Companies have to go further off the grid to find deposits. The deposits now being mined are getting older; the metallurgy is more complex and grades are going down. In 2000, it cost $4,000–5,000 on average to build the infrastructure to produce a ton of copper. Now that number is north of $10,000/ton. Nickel is the only other metal with that kind of increase in capital intensity.

Declining ore grades mean miners need a much larger relative scale of mining and milling operations to get the same amount of metal. New mining projects are often in remote areas of developing countries with little to no infrastructure. When you are in the middle of the jungle, without access to roads, railways or seaport, you have to build all that. That’s why new copper and nickel mines cost upwards of $8 billion ($8B).

TMR: Do you think the economy is recovering and how does that impact the demand for copper?

RM: Economies in the developing world—the U.S., Japan, the Eurozone—are not recovering. (See chart below.) I would expect growth to be 1.5-2% for the next couple of years, which is not enough to stimulate new demand. In contrast, the BRIICs (Brazil, Russia, India, Indonesia and China) are expected to grow at least at a 6% average. These countries are undergoing massive industrialization and urbanization that will more than make up for the slowdown in the West. 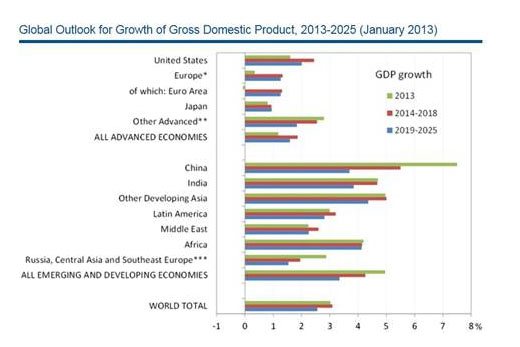 TMR: Given the copper shortage, will senior companies like Teck Resources Ltd. (TCK:NYSE; TCK.A:TSX) and Vale S.A. (VALE:NYSE) go looking for new deposits or do you see more merger and acquisition activity?

RM: I prefer junior companies that already have a deposit. One that meets my criteria is VMS Ventures Inc. (VMS:TSX.V). Its Reed Lake project in Manitoba, Canada, is a 70/30 joint venture with HudBay Minerals Inc. (HBM:TSX; HBM:NYSE). It will be in production later this year. The ore will be trucked to HudBay’s milling and concentrating facilities. By 2015, VMS will have decent cash flow after paying back HudBay, with close to $100 million ($100M) flowing to VMS over the current five-year life of mine (LOM). The deposit could grow along with the LOM. Manitoba is mining friendly, has a skilled local workforce and all the infrastructure you need.

RM: I would rather see HudBay continue as the operator and see VMS use the cash flow. Right now, VMS has $10M in its treasury. It could use that money to explore or acquire another project. Plus, it already owns 21% of North American Nickel Inc. (NAN:TSX.V).

TMR: What about nickel? Are there shortages there too?

RM: The biggest problem I see with nickel concerns the types of deposits. Nickel deposits come in two forms, sulfide or laterite. About 60% of the world’s known nickel resources are laterites. Sulfide metallurgy is much simpler and therefore sulfide nickel is much cheaper to produce. The principal ore mined from sulfide deposits is pentlandite, which has simpler metallurgy. Laterite metallurgy is more complicated, and the deposits are often in equatorial countries that carry higher geopolitical risk. We have not had a new major sulfide discovery in years. They just are not being found anymore. We have laterite nickel deposit discoveries, but there is no simple separation technique for nickel laterites. The rock must be completely molten to enable nickel extraction. Laterite projects require large economies of scale to be viable because of their higher capital costs per unit. We are looking at north of $35/pound (35/lb) of capital intensity to build these very large ferronickel and high-pressure acid leach projects.

TMR: You mentioned North American Nickel. Can you tell us more?

RM: North American Nickel started drilling its Maniitsoq, Greenland project last year and got fantastic results. The principal ore is pentlandite, which is the first important factor. The second is that Alex Balogh, former CEO of Falconbridge, is on North American Nickel’s advisory board. That is a huge endorsement.

The company has about $1.5M in the bank and is planning a 3,000-meter drill program at Maniitsoq. It will target high-priority, variable time-domain electromagnetic conductors and follow the open high-grade sulfur mineralization. This is a huge camp, a 100% owned district. VMS and the Sentient Group out of Australia are big supporters. North American Nickel is currently raising $7.5M for a huge Greenland program this year.

TMR: Our next topic may be new to our readers, a minor metal called anorthosite. What is it and why are you so excited about it?

RM: Anorthosite is calcium feldspar, which is basically sand containing aluminum, calcium, low levels of soda and 1% iron. It could serve as an alternative material in many industrial applications. For example, it could replace kaolin, a major component of glass fiber manufacturing.

TMR: What about anorthosite’s potential for aluminum manufacturing?

RM: That is a much bigger prize, but it will take longer to get going. Anorthosite has three things going for it. First, it is highly soluble in hydrochloric acid. Second, if the anorthosite ore contains little iron, it is easy to extract the calcium and the alumina. Third, and most important, acid regeneration technology could allow processors to capture the hydrochloric acid and use it again, saving a lot of money. That could be a cheaper alternative to the Bayer process many producers use today. Bauxite is the main source for aluminum. Today, bauxite producers do not factor in the cost of sequestering their tailings—their red mud—into their expenses. If they did, their margins would change. In the past, producers have dumped their red mud into the ocean—this is not acceptable today. Meanwhile, the process of calcining the bauxite consumes enormous amounts of power, and costs are rising for caustic soda, which is used in this process. The electrolysis process used to create aluminum is also energy intensive.

TMR: What companies are mining anorthosite?

RM: Hudson Resources Inc. (HUD:TSX.V) is working the White Mountain anorthosite project in Greenland. The company had been working on its rare earth and found a large anorthosite body. This stuff is easy to mine. You do a little blasting, a little digging. Hudson Resources has proven it can reduce the anorthosite’s iron content by running it through the company’s onsite magnetic separator. The soda content is averaging 2.3%. Both of these are below the levels needed to create a ready-mix replacement for kaolin. The company is close to the point where it can load its anorthosite onto a deep-sea cargo ship and transport it anywhere in the world, year round. It has a resource estimate and a prefeasibility report is due out in Q3/13. This company could hit a homerun for investors.

Interestingly, Alcoa Inc. (NYSE:AA) is building an aluminum smelter in Maniitsoq, Greenland. The company has the potential for a 600-megawatt electrical plant up. It is building the plant to provide the cheap hydroelectricity needed for alumina production.

TMR: Rick, we can always count on you for new and different thinking. Thank you.

RM: Thanks for having me.

Richard Mills is host of www.Aheadoftheherd.com and invests in the junior resource sector. His articles have been published on over 400 websites.

Want to read more Metals Report interviews like this? Sign up for our free e-newsletter, and you’ll learn when new articles have been published. To see a list of recent interviews with industry analysts and commentators, visit our Streetwise Interviews page.