EconMatters: Think before going on CNBC: This was the more revealing takeaway from David Einhorn`s whining on CNBC over his stuck Apple position, and throwing Amazon under the bus in the process. The more these guys go on air, whether it is Carl Icahn, Bill Ackman, or David Einhorn the less attractive these guys appear for managing money. 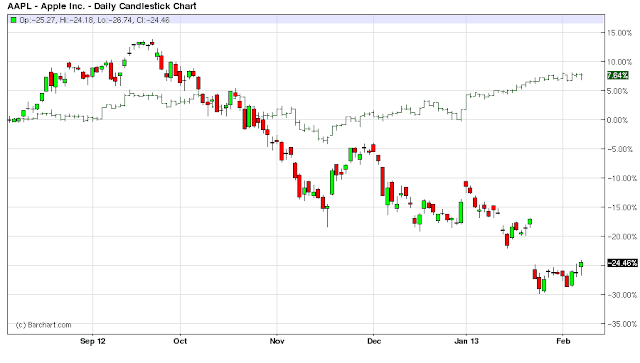 For an activist that is so fond of finding good short ideas, the fact that David Einhorn and Greenlight Capital happened to miss the best short setup of the year is hilarious, and it is not something I would want to advertise on CNBC. 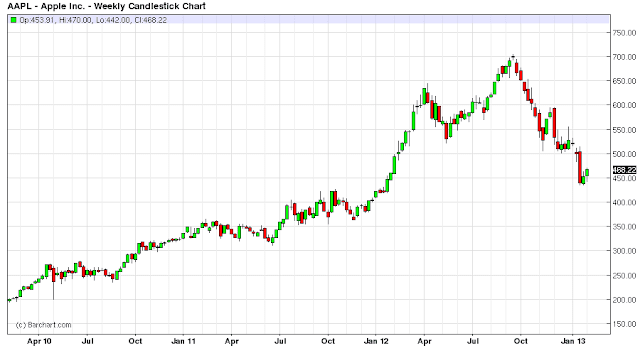 Under any analysis, even the most glowing of circumstances, Apple was going to pullback at least $80 a share from $705? As the “Smart Money” on Wall Street, and an opportunistic short player why didn`t Apple at $705 a share scream to your team at GreenLight “this is free money” like the rest of hedge funds the last four months? Did the phrase ‘Never fall in love with your investments’ come to mind?

The final question for GreenLight: Where was your stop loss on the position? Seems like if anything you added to your original position on the way down in price versus protecting profits via a proper stop loss. This isn`t amateur hour at the local investing club, you`re supposed to be smarter than that strategy! It is a sub optimal strategy from an investment and trading theory standpoint, and GreenLight is a hedge fund, right?

Finally, GreenLight cannot point to the fact that they have owned Apple since 2010, and their 3 year returns are great, Hedge Funds are judged upon annual returns. The accounting books close each year, and 2012 returns are one accounting period, and 2013 is an entirely different starting point for analysis. The question for investors is could Greenlight have protected their capital better in 20112?

It should have been cause for alarm that so many Institutions and Hedge Funds were involved on the same side of the trade for such an extended period. The prototypical ‘Over-Crowded’ trade scenario. 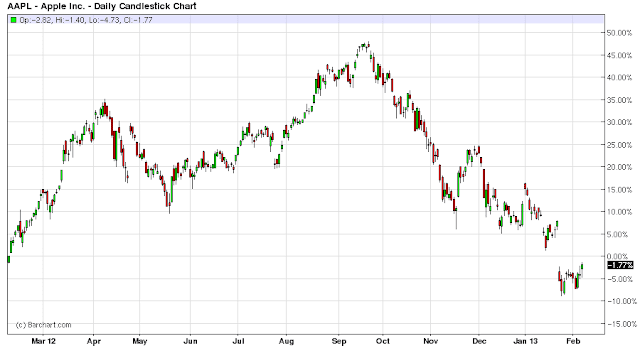 It is obvious that there is too much group think at GreenLight Capital, and they need to broaden their investment spectrum with a healthy dose of diversity with some new analysts to fully vet and question trading themes and ideas.

GreenLight Capital as an investor in Apple since 2010 should have seen the natural progression from a high flying growth machine to a slower growing mature value tech company a mile away. This is a natural occurrence and inevitable in the tech industry.

Yeah Apple is sitting on a pile of cash, but they also were being valued like a momentum growth stock prior to four months ago. Good luck figuring at what price Apple should become a “value stock”! If there is one thing that in not rewarded on Wall Street it is value, see GE, MSFT, INTC and a graveyard of much cheaper “value stocks”. 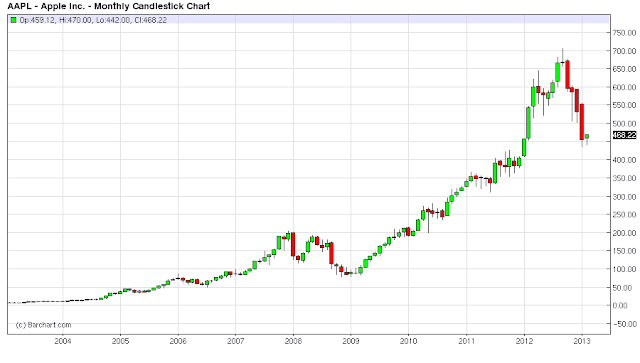 Turning a ‘Growth Trade’ into a ‘Value Trade’

David be honest with yourself you were not investing in Apple because they were a value stock, you were on that growth gravy train from 2010, and you didn`t know when to get off. Now you’re turning your growth trade into a value trade, the quintessential sign of a losing trader on Wall Street. 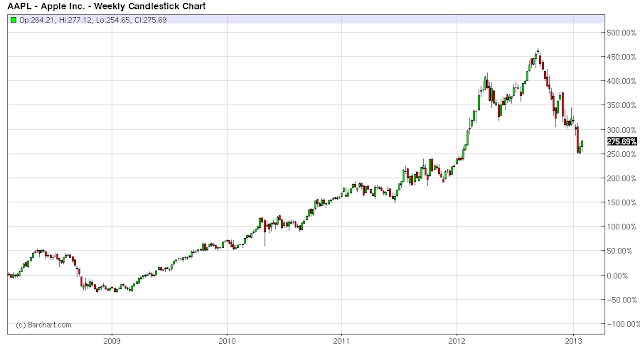 Does GreenLight have a Technical Analyst on staff?

That is not something I would want to advertise on Wall Street, that I fail to read a technical sell signal on a chart, and let a huge profit just slip away for my investors.

But I know it is all about the money, you screwed up, and you would rather embarrass yourself, but somehow get that money back for investors instead of asking yourself the hard question: why did we make the mistake in the first place, learn from it, and quietly move on to other investment ideas.

Falling into the classic bag holder category for a Hedge Fund wanting to attract future assets under management where reputation is everything; weighing near-term profits versus long-term reputational damage from a cost benefit standpoint should probably have overridden any decision to go public with this Apple Cash issue.

That is the problem with a small shop like GreenLight, they often lack enough diverse views within the fund to properly question trading ideas, and often fall into group think on trading themes.

Did they even consider the negative ramifications of going the public route on this issue? In the end it is all about raising capital in this business not whether you are right or wrong on a single investment idea.

GreenLight just advertised to the entire investment world that the core of their analytical expertise is flawed, and no better than the Gene Munsters of the world. A cab driver could have made money in Apple on the way up, the smart money knows when to get out, and make money on the way down.

Those are the firms that the institutional and feeder funds want to manage their money. This is why SAC Capital has been so successful over the years raising money because they were viewed reputationally as the ‘smart money’. No wonder most of the hedge funds when accounting for fees vastly underperformed the S&P 500 last year; there is a lot of ‘Dumb Money’ on Wall Street!

From a reputational and branding standpoint GreenLight Capital sure looks like the “Dumb Money” in Apple, and I would think twice about sending any money their way in the future!