The company announced earnings on April 23 and investors liked what they saw and heard from the report.

The stock gapped higher on April 24 and has not looked back since.

Just look at the overbought/oversold indicators on the daily chart below.

Since the gap higher, the stock has been in overbought territory for the whole time with the exception of a few days. 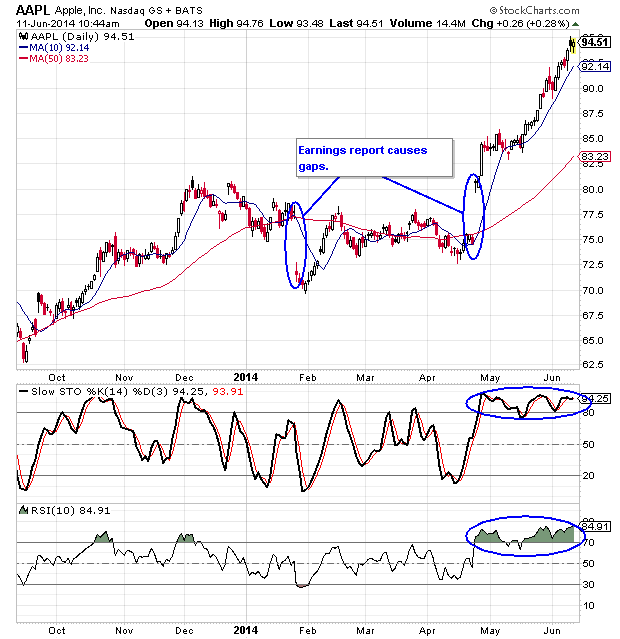 This is a phenomenal rally for a stock that is so widely held and it actually may have been helped by the recent split.

In case you missed it, the stock underwent a 7:1 split on Monday (June 9).

Normally a stock split is supposed to be a non-event.

The stock splits, investors have the same number of shares, charts are adjusted accordingly and it is no big deal.

However, when the stock is trading up around $650 before the split, many investors may avoid trading the stock because it limits the flexibility.

How does a stock’s price limit the flexibility?

Let me give you an example.

When Apple stock was trading at $650 per share, an investor with $30,000 to invest or reallocate could buy 46 shares of AAPL.

Perhaps this investor likes to use options strategies with his or her stock purchases.

But because of the low number of shares and the odd amount, the investor can’t write covered calls.

An option represents 100 shares, so in order to implement such a strategy, the investor needs to own at least 100 shares.

Now that the stock is priced under $100, the same investor could now buy 300 shares and use their covered call writing strategy.

With the charts being adjusted accordingly now, take a look at the weekly chart below.

Now we see that the stock is approaching its all-time adjusted high of $96.69 that was reached in September 2012. 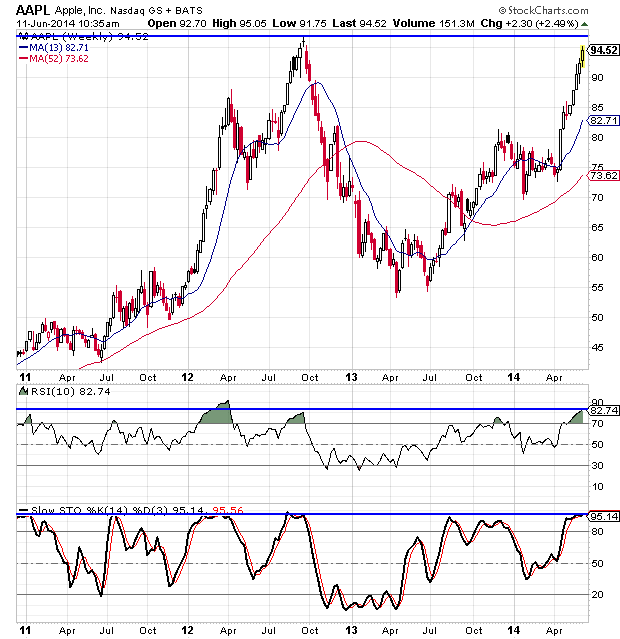 Looking at both the 10-week RSI and the weekly stochastic readings, we also see that the stock is the most overbought it has been since that all-time was reached.

Looking at the sentiment indicators for Apple stock, we see that the short-interest ratio is at 1.6, the put/call ratio is in the 62 percentile range for readings from the past year, and the analyst ratings show 40 “buys”, 13 “holds” and two “sells”.

The analyst ratings have become more skeptical over the last year and a half.

I wrote an article about AAPL back in October 2012 and at that point there were 49 “buys”, four “holds” and two “sells”.

The split will likely have an impact on the sentiment readings in the coming months.

I would expect the short interest ratio to increase a little as people that have wanted to short Apple stock in the past may not have wanted to deal with the margin requirements to sell a $650 stock short.

The split will also have an impact on the options as premiums will come down and activity will likely increase.

Which way this moves the put/call ratio is anyone’s guess.

Personally, I wouldn’t be looking to add Apple stock to my portfolio anytime soon.

The all-time high being just above the current level is a concern as are the bullishly skewed sentiment indicators.

Over the next couple of months we should get a better read on the sentiment as investors adjust to the new price.