EconMatters:  Holiday Melt Up in Stocks.  Apple Inc. (NASDAQ:AAPL) and most stocks do routinely well during the 4th quarter, and especially the last couple of months of trading after earnings are out, and the fund managers are pushing everything up with the goal of making their trading numbers by year end window dressing. It is amazing more people don`t realize this phenomenon and just buy December expiration calls on the SPY after the usual selloffs that happen in the third quarter, and wait for the holiday rally where stocks routinely melt up at year end.

Apple almost touched $124 a share after earnings before some negative news came out regarding the supply chain which hinted at slower demand for I-Phones towards year end, and the stock reached its all-time high of almost $135 a share in late April of 2015. But if you are not already in at a good price for a long term short of Apple stock, then hope for one more run-up into year-end holiday trading to position yourself for the inevitable decline in this once Wall Street darling. Anything over $125 a share is an excellent price entry point to short this stock, and have a long term positive expected return on your investment from the short side. This stock should continue to put in lower highs and lower lows for the next five years, and ultimately continue lower for the next decade as this company eats through its massive cash reserves trying to come up with their next I-Phone blockbuster product in a declining margin world. 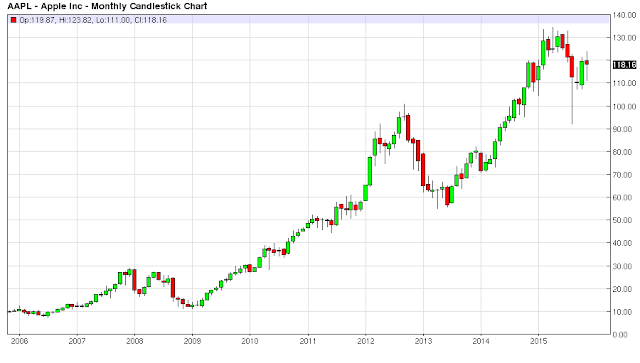 Apple stock is a widely held stock by institutions, hedge funds and fund managers. This stock is basically a core holding in many fund managers portfolios, this is bad news once the bloom comes off of this rose, and investors start to see the long-term writing on the wall regarding increased costs and declining margins across the variety of Apple products it offers to consumers. In the end they are in a commoditized business, and this story never ends well judging by the history in this space over the last 50 years.

I-Phones Sales Hanging in There

I-Phones continue to hang on with newly created iterations with their slightly better bells and whistles but the improvements or differences between phone iterations are becoming less and less pronounced. Apple pulled the last big improvement in their phone out of the hat with finally giving in and producing a larger screen size for consumers. Sure there are still many I-Phone users who need to upgrade their phone, but I-Phones users are first adopters, that`s why they have I-Phones to begin with because branding and image are important to them so they don`t wait long to have the newest I-Phone. Stock prices are forward looking and the stock will move before the fundamentals fully become apparent to the overall market. By the time it becomes obvious that the trend in I-Phone sales is down for the foreseeable future, the stock will have long started its downward trek in price.

Smartphone Industry is a Mature Market

The cell phone and smart phone market is a mature industry, even basic and lower end smart phones essentially have the same comparable specs and features. And now that consumers have to pay full price for these small computers, consumers are going to think twice about shelling out $700 for a new I-Phone every year. Especially when the phones haven`t changed that much and they can get a pretty damn good equivalent smart phone for $50-$200 and in some cases even free with slightly older models. Once consumers get reoriented to the fact that they are basically buying the entire phone as no part is subsidized by their data provider, it is intuitive that I-Phone prices are going to come down to remain competitive in the market.

This is the next phase in the smart phone wars. First it was product innovation and differentiation. This phase as products become more and more alike is routinely followed by the price wars phase. And Apple has always tried to brand their way out of this problem by remaining the one premium branded product in the space. EconMatters view is that this may work for six more months but the writing on the wall will play out for Apple, and they will have to reduce prices just to stop the bleeding. As Apple is in for some brutal comps as I-Phones become too expensive relative to competitor offerings given the actual slight if any differences between smartphone specs. A consumer would find it difficult to justify paying $600 more for a phone when the only difference is a small icon on the back which will be covered up by a smartphone case nonetheless. 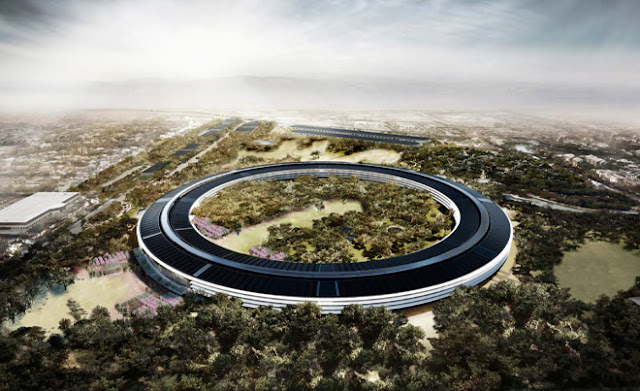 Beware in the history of building new office palaces or naming stadiums as this occurrence often through history signals the turning point in company fortunes. The list is long of company hubris at the top of the market spending out the wazoo for plush nice new office space only to have to move out of said office space or sell this luxury space at rock bottom prices in distressed times only a few years later. I expect this to be no different with Apple`s new spaceship offices in California.