Fear of increased government scrutiny has pushed the most popular stocks of this bull market into a precarious chart pattern, which could signal more pain ahead for the group and the rest of the stock market.

A chart analyst at Bank of America Merrill Lynch tracked the performance of the four ‘FANG’ names — Facebook, Amazon, Netflix, and Google-parent company Alphabet — versus the broader S&P 500 since December 2017. A “head and shoulders” pattern, which in the past has signaled a top, has formed in those ‘FANG’ stocks once again, just as they did last year before the group and the rest of the market fell apart.

“Early-October 2018 saw Facebook, Amazon, Netflix and Google (FANG) break below a short-term uptrend after forming a head and shoulders top,” said Stephen Suttmeier, chief equity technical strategist at Bank of America-Merrill Lynch, in a note on Wednesday. “This was a canary in the coal mine for the late-2018 U.S. equity market correction.”

“Past weeks have seen the emergence of a similar head and shoulders top on FANG, supported by a similar breakdown relative to the S&P 500, confirming a pullback for the S&P 500,” he added.

The ‘FANG’ stocks formed their most recent head and shoulders pattern after the group hit a high in March, a higher high in April, and a lower high in late May.

Another ominous pattern for FANG 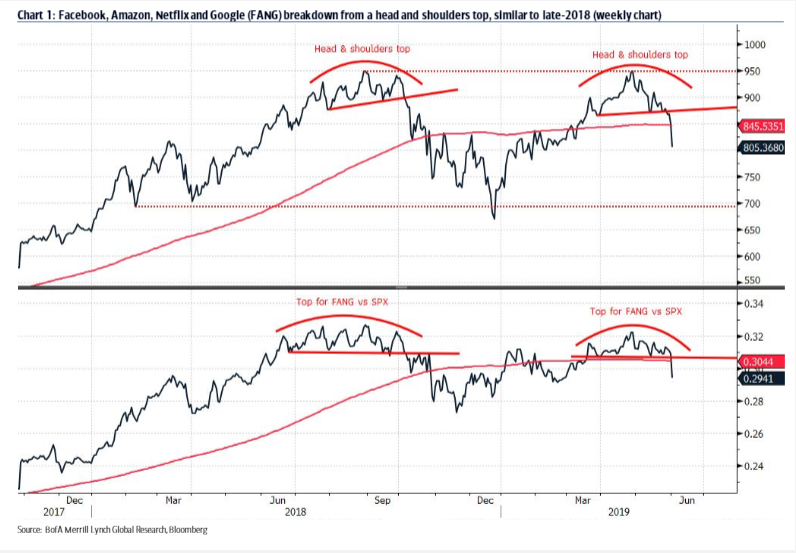 “A failure for the group to retake resistance vs the S&P 500 supports the bearish breakdown, signaling risk for the broader market,” he wrote.

Though the S&P 500 has rallied nearly 20% since its recent low in late December, the index is down 4.4% over the past month. During that stretch, real estate and utilities have been the best-performing groups — a signal that investors have fled to safe-haven assets amid growing concerns of a prolonged trade war and the health of the U.S. economy.

Those same worries, which battered shares of ‘FANG’ stocks in the final months of 2018, have returned. And, the added threat of increased government regulation has deepened investor anxiety, leading to the “head and shoulders” pattern Bank of America outlined.

The Justice Department is reportedly preparing an antitrust probe of Google, while the Federal Trade Commission has reportedly assumed oversight of Amazon and Facebook, looking into how those companies potentially harm digital competition.

Investors were most concerned about Facebook and Alphabet on Monday,sending shares of both down more than 6%. Amazon slid more than 4%, while Netflix — the relative outperformer — dropped nearly 2%. In total, they shed nearly $130 billion in market value and led a 1.6% slump in the Nasdaq Composite, sending the tech-heavy index into correction territory — down more than 10% off its record high peak in late April.

“The whole component of what’s going on in tech right now goes back to the rhetoric of Sen. Elizabeth Warren threatening to break up tech giants,” Jeff Kilburg, CEO of KKM Financial, told CNBC Monday. “We thought that was just rhetoric. But now with this news hitting, it’s really impactful.” Warren, a presidential candidate, said in March that she was interested in naming regulators to undo what she called “anti-competitive mergers,” including Google’s deals with smaller firms like Nest and Waze.

These tech giants rebounded Tuesday, in part due to growing evidence that the Federal Reserve was open to easing monetary policy, but have come under renewed pressure. As of noon Wednesday, each of the ‘FANG’ names was trading in negative territory, even as the rest of the market rallied. With the declines this week, Alphabet has wiped out its gains for the year while Facebook has re-entered bear market territory — down 23.5% from its recent high in July 2018. 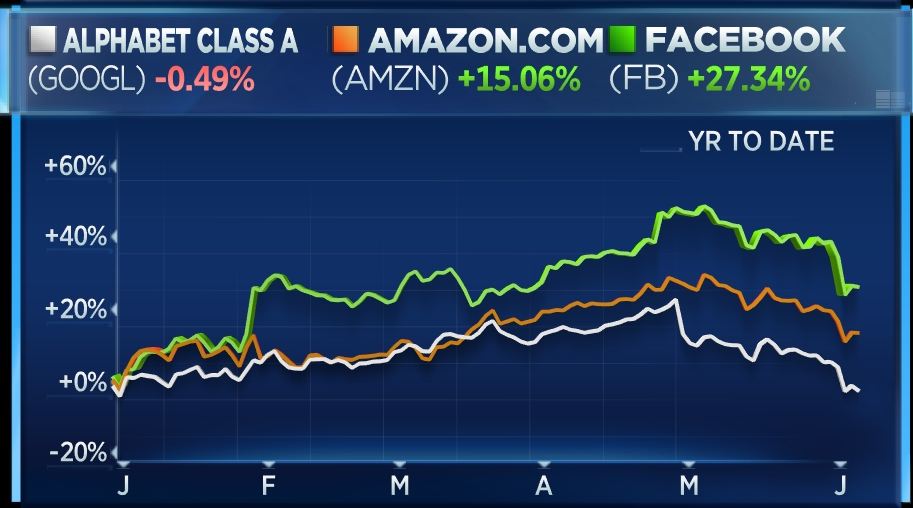 Still, some analysts caution that the antitrust concerns, and the potential impact on firms’ quarterly results, could be overblown.

Mahaney added he thinks it is “highly unlikely” that any antitrust investigation will result in “any sort of forced sale of assets, forced disposal of assets” for the tech giants.

XLK currently has an ETF Daily News SMART Grade of A (Strong Buy), and is ranked #1 of 79 ETFs in the Technology Equities ETFs category.