David Fabian: Over the last week, municipal bonds have been back in the headlines as the city of Detroit, Michigan has declared that it will be unable to make payments on a portion of its debt. Their restructuring proposal has asked bond holders to be repaid less than 10 cents on the dollar. While defaults on muni bonds are rare, there have been several high profile instances of insolvent municipalities or debt restructuring demands over the last several years that have shaken investors’ confidence in these securities. In addition, the recent rise in interest rates has caught many fixed-income holders off guard as the price of their bonds has receded.

So is it time to throw in the towel on muni bonds or ride out the volatility?

A quick look at a chart of the iShares National AMT-Free Muni Bond ETF (NYSEARCA:MUB) shows just how volatile the environment has been for municipal bonds over the last year. This ETF currently has exposure to 2,376 individual bonds, although California, New York, and Texas account for nearly 50% of its holdings. It has total net assets of over $3.5 billion with a 0.25% expense ratio and 6 year average duration. 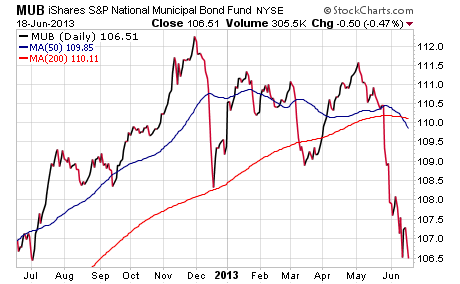 MUB has a 30-day SEC yield of 1.92% which iShares has calculated to a tax equivalent yield of 3.39%. Tax equivalent yield is used to compare the difference between the yield on a taxable bond vs. that of a tax free bond. In my opinion, that yield is exceptionally low for the type of volatility and whipsaws that this investment has produced over the last 12 months.

So far this year, MUB has a total return of -2.18%, while an active core strategy such as the PIMCO Total Return ETF (NYSEARCA:BOND) is down just -0.64% over that same time period. Some would argue that comparing MUB to BOND is like comparing apples to oranges, as most muni bond investors are focused on tax-free income. However, I think it is important to point out viable fixed-income alternatives even if they are not tax-free because at the end of the day, what matters most is total return.

In my analysis of the individual holdings in MUB, I was able to find several small allocations to Detroit municipal bonds. However, the position sizes were so minimal as to have very little real world impact on the price of the fund. A default or restructuring of that debt would more than likely be trumped by significant price movement in the three key states that dominate the holdings. This is one of the benefits of owning a large diversified ETF instead of individual securities that may be susceptible to additional credit risk.

How to Play The Muni Bond Sector

If you have exposure to broad-based municipal bond funds, you have most likely already endured the brunt of this move in interest rates and price sensitivity. I would continue to hold these positions but look to reduce exposure on any rallies so that you do not overweight your portfolio in this under performing asset class.

In addition, you may want to consider shortening the duration of your muni portfolio to a fund such as the iShares Short-Term National AMT-Free Muni Bond ETF (NYSEARCA:SUB) or SPDR Nuveen Barclays Short Term Municipal Bond ETF (NYSEARCA:SHM) which will have smaller price fluctuations but also a lower yield. Ultimately the impact of rising interest rates will continue to put downward pressure on fixed-income ETFs with higher average durations.

This article is brought to you courtesy of David Fabian from Fabian Capital Management.