Thomas Carreno: In the markets, the long term trumps everything else.  The longest term time frames hold precedence over all other time frames.  They move slower than a snails pace and are very slow to change direction once a direction is chosen.

The extended market decline from 2007 to 2009 has caused many market timers to repeatedly anticipate the next big extended bear market down leg since the lows of 2009.  Since 2009 the market has delivered several periods of very high volatility and has appeased the bears to a certain degree.  But it has most certainly failed to fully please the bears who were looking for another very extended period of weak tape action similar to 2007 to 2009.

Now we see that the markets are pressing up against the yearly highs of 2011 and possibly poised for an upside breakout to continue this bullish nature of the market.

The yearly chart of the Dow Jones Industrial Average (NYSEArca:DIA) below gives us a few important insights: 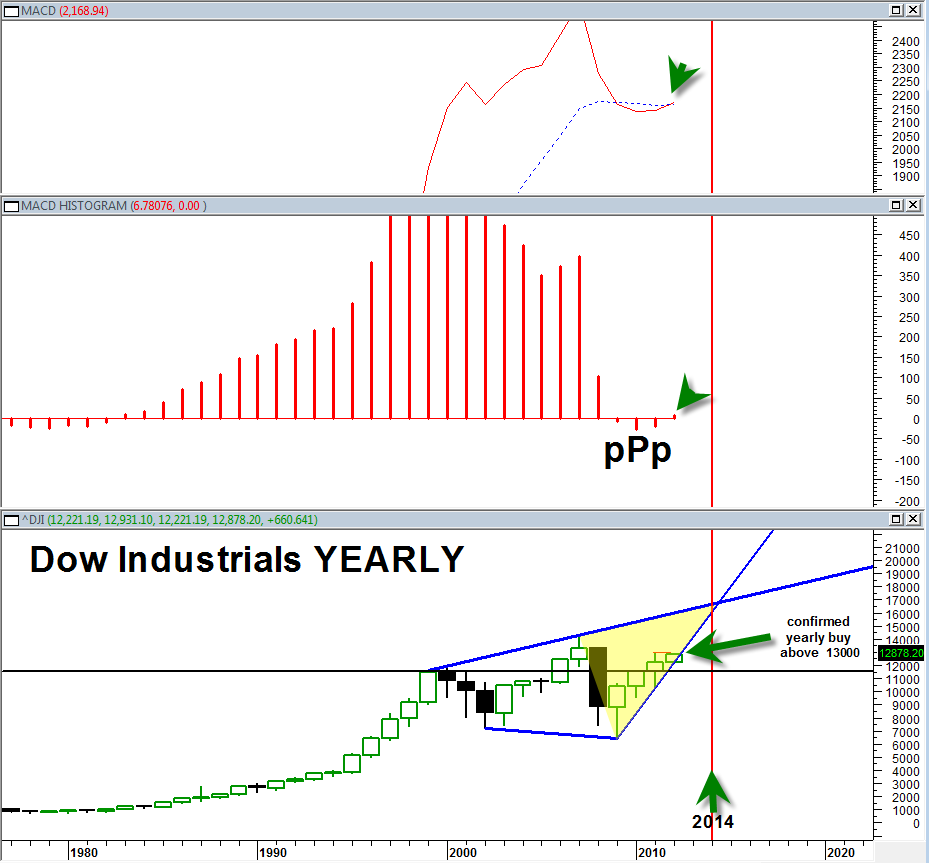 The odds favor the bullish case still.  The bearish case would only gain traction if we start to see A. failure of the 2009 up trendline  B. Failure of 11,500 support in the DJIA. A reversal of the yearly MACD.  A complete reversal of the 2012 price candlestick that pushes the MACD histogram back down into a bearish triple M instead of a bullish triple P.

Finally, it is interesting to note that the yearly 2014 year lines up with the apex of the resistance and support zones of the broadening wedge and also matches up when the Fed has indicated it will begin to start raising rates.

I started Best Online Trades because I really enjoy trading and I also enjoy writing about trading. Writing about trading or trading strategies helps transfer thoughts that would otherwise stay in ‘theory’ and helps move them to more concrete form for me. And hopefully along the way you will pick up something useful as well.  BestOnlineTrades covers many different aspects of trading, from commodities to stocks, from indices to ETF’s.