where the U.S. economy is heading.  Bernanke told members of Congress that recent economic data points “suggest further weakness ahead” and that the Federal Reserve is projecting that the U.S. unemployment rate will remain at 7 percent or above all the way through the end of 2014.  Now, it is important to keep in mind that Federal Reserve forecasts are almost always way too optimistic.  The actual numbers almost always end up being much worse than what the Fed says they will be.  So if Bernanke is saying that the U.S. unemployment rate will be 7 percent or higher until the end of 2014, then what will the real numbers end up looking like?  During his testimony, Bernanke seemed unusually gloomy about the direction of the U.S. economy.  He seemed resigned to the fact that there really isn’t that much more that the Federal Reserve can do to stimulate the U.S. economy.  Yes, the Federal Reserve could try another round of quantitative easing, but the first two rounds did not really do that much to help.  The truth is that the United States is absolutely drowning in debt, and when that debt bubble finally bursts the Federal Reserve is simply not going to be able to save us from the Great Depression that will happen as a result.

At this point, Bernanke appears to be in “cya” mode.  For example, the following is from Bernanke’s prepared remarks to Congress on Tuesday….

The second important risk to our recovery, as I mentioned, is the domestic fiscal situation. As is well known, U.S. fiscal policies are on an unsustainable path, and the development of a credible medium-term plan for controlling deficits should be a high priority. At the same time, fiscal decisions should take into account the fragility of the recovery. That recovery could be endangered by the confluence of tax increases and spending reductions that will take effect early next year if no legislative action is taken. The Congressional Budget Office has estimated that, if the full range of tax increases and spending cuts were allowed to take effect–a scenario widely referred to as the fiscal cliff–a shallow recession would occur early next year and about 1-1/4 million fewer jobs would be created in 2013. These estimates do not incorporate the additional negative effects likely to result from public uncertainty about how these matters will be resolved. As you recall, market volatility spiked and confidence fell last summer, in part as a result of the protracted debate about the necessary increase in the debt ceiling. Similar effects could ensue as the debt ceiling and other difficult fiscal issues come into clearer view toward the end of this year.

The most effective way that the Congress could help to support the economy right now would be to work to address the nation’s fiscal challenges in a way that takes into account both the need for long-run sustainability and the fragility of the recovery. Doing so earlier rather than later would help reduce uncertainty and boost household and business confidence.

Did you catch that?

Bernanke says that the federal government is on an “unsustainable path” and must reduce debt, but he also says that the economy cannot afford tax increases and spending cuts right now.  In fact, Bernanke is warning that “a shallow recession would occur early next year” if something is not done about the looming “fiscal cliff” that so many people are talking about.

So what does Bernanke want us to do?

If we continue on the path that we are on, our debt will continue to grow by leaps and bounds.

But if we seriously cut spending or raise taxes, that will significantly slow down the economy.

Either path leads to a whole lot of pain.

Bernanke sounds like a politician that is trying to cover all of his bases without giving us a recommendation about how to fix things.

Of course the truth is that the Federal Reserve system itself is at the very heart of our economic problems and has been the engine that has caused our national debt to explode at an exponential rate, but we all know that Bernanke will never admit that.

Bernanke can see that things are starting to fall apart, and he wants to shift as much blame to Congress and to other entities as he can while there is still time.

Bernanke knows that the U.S. economy is not going to produce enough jobs for our population anymore, and he does not want to be blamed for that.

Bernanke knows that the money printing done by the Fed is going to cause prices to continue to go up and that this will seriously stretch family budgets all over America, and he does not want to be blamed for that.

Bernanke wants to come out of all this looking like a good guy.  At this point he is probably hoping that the next great global financial crisis does not happen until his term ends.

Unfortunately, he is not going to have that luxury.  The next wave of the economic collapse is rapidly approaching, and it is going to hit the U.S. even harder than the last recession did.

And when the unemployment rate soars well up into the double digits, what do you think is going to happen?

The truth is that the entire country will soon resemble cities such as Gary, Indiana and Flint, Michigan.

To get an idea of what most of our cites will soon look like, just check out this video.

When people lose hope, they tend to get desperate.

Just look at the mob robberies that we are seeing all over the country right now.

In Jacksonville, Florida the other day, hundreds of young people that had just left a massive house party that police had broken up decided that they would descend on the local Wal-Mart.

According to police, approximately 300 people stormed into Wal-Mart and started going crazy.  They threw produce at each other, many of them started putting merchandise into their pockets, they destroyed an anti-shoplifting security scanner that is worth about $1,500 and there were even reports that shots were fired outside of the store.

It was absolute chaos.  You can see video of this incident right here.

A similar mob robbery happened in the Portland, Oregon area on Saturday night….

A group of teens targeted a Troutdale store last weekend in a ‘flash rob’ and investigators are trying to identify the suspects.

Investigators said as many as 40 kids entered the Albertsons store at 25691 SE Stark Street at the same time late Saturday night and started stealing things.

Security officers chased the thieves out, but no one was captured. They also left employees pretty shaken up, including one woman who was in tears after getting terrorized by the robbers.

So will Ben Bernanke and the Federal Reserve be able to save us from this kind of chaos?

If you have any faith in Bernanke at this point then you are being quite foolish.

Our economy is on the verge of collapse, and when it does collapse there is going to be hell to pay on the streets of America.

These days young people seem to commit absolutely brutal crimes just for the fun of it.  For example, in Chicago the other day two teens beat to death a 62 year old disabled man who was collecting cans for no apparent reason whatsoever.  The following is from a report about this incident from the NBC affiliate in Chicago….

Police said a 16-year-old gang member punched Delfino Mora, father to 12 children and a grandfather to 23, last Tuesday in an alley in the 6300 block of North Artesian. Mora’s devastated family told NBC Chicago that Mora was on his regular route of collecting cans that he sells for cash when the teens confronted him.

Police said Jones handed his friends his cell phone to start filming then demanded money from Mora and punched him in the jaw. Ayala and Malcolm are accused of taking turns filming the video which allegedly showed Mora’s head smashing into the concrete.

But just because you aren’t in the city does not mean that you are safe.

For example, just check out what happened to three rural Michigan teens when they decided that it would be fun to hop on a passing train.  The following is from a recent article in the New York Times….

For generations of Midwestern youths who have grown up hearing the long whistles and deep rumbling of passing locomotives, hopping a freight train to another city has seemed like a free ride to adventure.

But for three rural Michigan teen-agers who actually followed this dream, the results proved disastrous. The two 15-year-old boys and a 14-year-old girl climbed off the train when it stopped last Wednesday evening in a rough neighborhood here. Within hours, the girl had suffered multiple sexual assaults and all three had been shot in the head and left for dead in a park.

One boy, Michael Carter, was killed, while the other, Dustin Kaiser, and the girl staggered to a road and flagged down a truck driver. Dustin is in stable condition at the Hurley Medical Center after two rounds of surgery, while the girl, who was shot through the cheek, was treated and released on Friday, said Donna J. Fonger, a hospital administrator.

Our country is degenerating, and the Federal Reserve is not going to save you.

We have been living in the greatest debt bubble in the history of the planet, and it is going to burst at some point and that is going to cause a massive economic depression.

Just check out what Richard Duncan, the author of The New Depression, told CNBC the other day….

When we broke the link between money and gold forty years ago, this removed all the constraints on credit creation. And afterwards credit absolutely exploded. In the U.S. it grew from $1 trillion to $50 trillion – a fifty-fold increase in forty three years.

This explosion of credit created the world we live. It created very rapid economic growth. It ushered in the age of globalization.

But it now seems credit cannot expand any further because the private sector is incapable of repaying the debt that it has already. And if credit now begins to contract there is a very real danger that we will collapse into a new great depression.

In the chart posted below you can see what he is talking about.  Once upon a time the total amount of debt in the United States (including government debt, business debt and consumer debt) was sitting at about a trillion dollars. 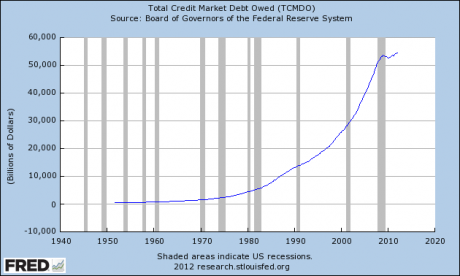 We have lived way above our means for decades, and now a day of reckoning is rapidly approaching.

Ben Bernanke and the Federal Reserve may be able to delay the coming depression slightly, but they cannot avert it.

You better get ready.