Jim Bach: The price of silver this week took a tumble, falling below $18 for the first time since 2010.

But there’s no need to panic and sell… 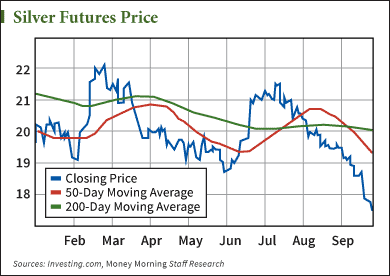 Other silver investments slumped as well. Exchange-traded funds backed by physical silver bullion, such as the iShares Silver Trust (NYSE Arca: SLV) closed at $16.83 a share yesterday, its lowest level since March 2010. It has fallen 10% on the year.

The ETFS Physical Silver Shares (NYSE Arca: SIVR) suffered a similar fate. It closed yesterday at $17.27, good for a 10% drop on the year as well, and nearing a level not seen since early 2010.

These troubles in the silver market have been brewing since July, when after hitting a three-month peak of $21.445 an ounce, the bears began to pile on short positions and put downward pressure on the white metal. Since hitting that peak in July, prices have fallen 18.4%.

But, things in the silver market are different this time from the last time prices saw a death cross. The two big headwinds that are preventing silver’s turnaround won’t be here much longer…

Two Big Factors Holding Back Silver Prices – But Not For Long

The first and most obvious recent drag on silver is the strength of the dollar.

As with all precious metal investments, silver is considered a good inflation hedge. As the value of the dollar is eroded, investors will look for alternative vehicles to park their wealth that are resistant to a weakening currency. Gold is the premier investment for this, but silver will often get similar attention, albeit, in lower volumes.