Historically low bond yields have helped boost stocks in recent years. BlackRock’s Russ Koesterich discusses why this may no longer be enough.

Despite recent wobbles, U.S. large cap stocks are having a decent year, up 6% year-to-date as measured by the S&P 500 (source: Bloomberg as of 9/30/2016). This may pale in comparison to a year like 2013, but performance is more than respectable given the anemic growth and the increasingly lengthy profits recession.

The question now is whether it can continue. But to answer that, we need to look at the bond market as much as the stock market.

U.S. equities continue to be buoyed by low interest rates. Many believe this dynamic can go on, since rates are probably going to remain low, creating a still high “equity risk premium”—the likely return from stocks over bonds. Stocks, which by many measures appear expensive, are still cheap because bonds are worse, this contention holds. Although there is a theoretical appeal to this argument, the relationship between stocks and bonds is not stable and tends to be less linear when rates are this low.

Historically, stocks do tend to trade at higher valuations when bond yields are lower. Since 1962 the yield on the U.S. 10-year Treasury note has explained roughly 25% to 30% of the variation in U.S. large cap equity multiples, as measured using the trailing price-to-earnings (P/E) ratio in the chart below. The challenge for investors today is that the relationship is not linear; in other words, the relationship differs depending on the level of rates. Lower rates do indeed lead to higher equity multiples, but only up to a point: When yields get very low, as they are today, the relationship breaks down. 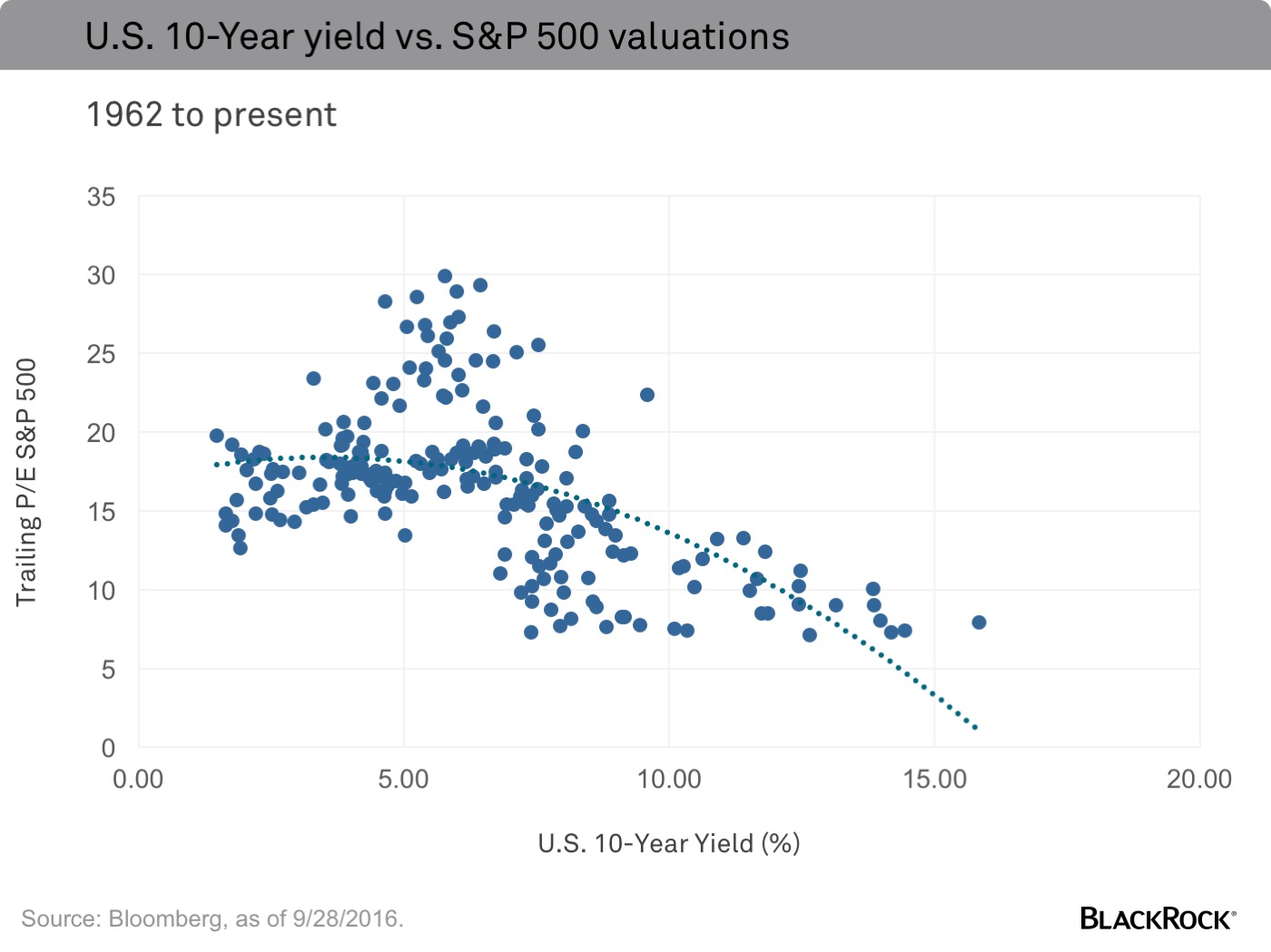 In fact, there is some evidence that when yields are at very low levels, investors should be looking for higher real, i.e. after inflation, yields to confirm the equity market advance. Using yields derived from the Treasury Inflation Protected Securities (TIPS) market over the past 20 years, equity multiples have been positively correlated with real long-term interest rates. For example, multiples were much higher during the boom years of the late 1990s, a period that coincided with strong growth, despite the fact that real yields were 3%-4%, roughly 10 times the post-2008 crisis average.

This nuance in the stock-bond relationship illustrates the problem of relying exclusively on yields to justify stock prices. While lower rates are generally good for stocks, there are other considerations, starting with economic growth and the factors that drive it.

In particular, investors should be concerned about the low productivity the U.S. has been experiencing recently. Soft productivity suggests not only slower growth, but more pressure on companies’ margins should wages continue rising. For this reason, valuations have historically been positively correlated with the rate of productivity. But the persistently negative productivity readings of the last several quarters are consistent with multiples 10%-15% lower than they are today.

None of this necessarily suggests we are heading into a bear market. Valuations have crept even higher in many of the post-1980s bull markets. That said, low U.S. rates are not enough to constantly propel stocks higher.