Rick Pendergraft: After the market dropped pretty hard Wednesday, when I ran my scans I expected a fair number of stocks and ETFs on the bearish scan.

The market has been more volatile over the last four or five weeks because investors are worried about the Fed hiking interest rates. When the Fed met last week and lowered its outlook on the economy, some investors felt that was a good sign that a rate hike wasn’t going to happen as soon as everyone thought. This sent stocks and bonds higher.

Of the three bond ETFs that appeared on the bearish list, the iShares Barclays 20+ Year Treasury Bond Fund (TLT) is the best opportunity in my opinion. While the AGG and BND have moved up nicely and are overbought, I don’t think there is enough movement to take full advantage of a rising interest rate environment.

The TLT rose sharply throughout 2014, with the price jumping over 27% during the year. The fund peaked at $137.95 in January and then slipped throughout February and the early part of March. 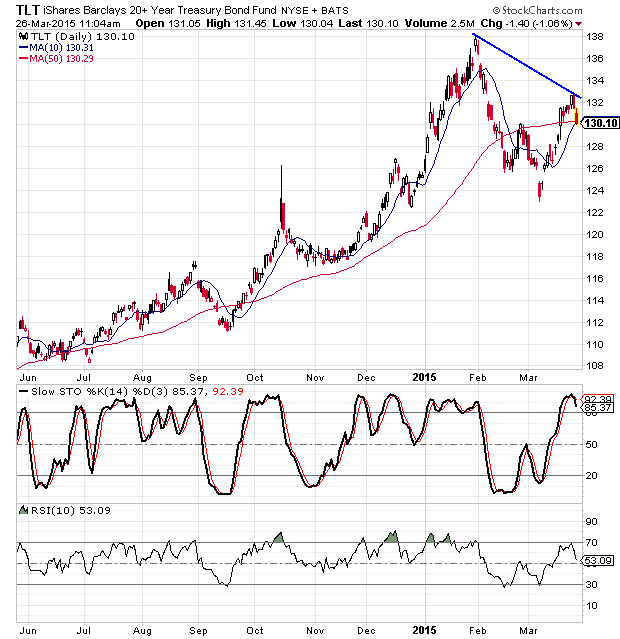 From March 6 through Tuesday, the TLT recovered nicely, but it also became overbought on the daily chart. The high reached on Wednesday was only $132.76 before the fund dropped. When we combine the high from January with the high from Wednesday, I believe we get what will act as a new trendline that will dictate trading for the coming months.