We’re on “Breakout Watch” where “Any Day Now” we can see a possible breakout event.

Let’s highlight our key levels and plan for the inevitable future breakout: 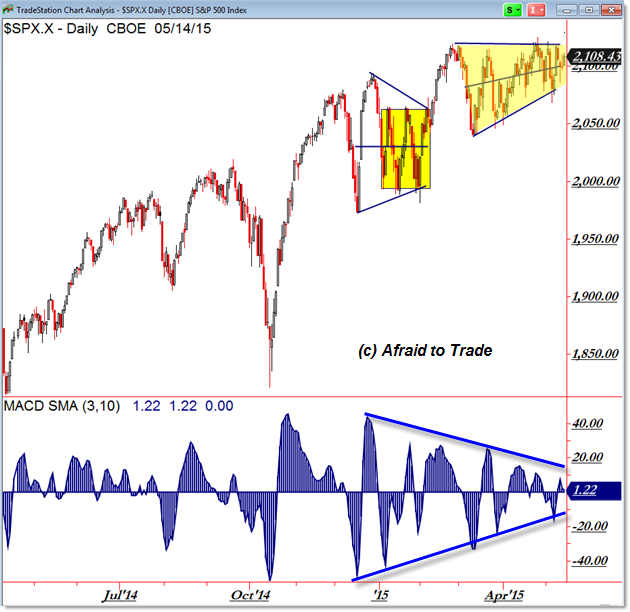 Notice the huge “Range Expansion” off the October 2014 low which gave way to the early 2015 Consolidation.

Yes, you can be 100% assured that the market will break free of this trading range into another mode of Range Expansion.

The trick is not to “guess” which direction the market will break and expand – just know that it will and be prepared.

Notice the tight compression also in the 3/10 Momentum Oscillator which itself has formed a Triangle Coil.

Look for a corresponding Price and Indicator breakout to signal the next potential trend move or Range Expansion.

Here’s a tighter zoom view of the two 2015 “Triangles” 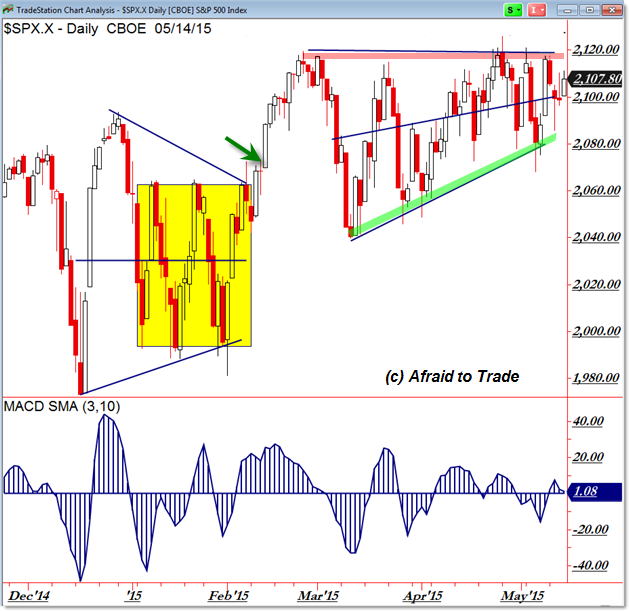 Price contracted like a Coil through January and broke higher – trading roughly 10 days in a row straight up – in February.

After the breakout move, price reached another equilibrium into the 2,100 level.

The “Upper Resistance” line exists near 2,120 while the lower support boundary rises up toward 2,080.

The Midpoint or Fair Value Area is 2,100 which is where the market closed yesterday.

Today’s session shows the market trading back toward the upside of the range and we’ll use it as our key reference point.

It’s worked so far to short the market – or take profits/be defensive – into the upper resistance just as it’s been effective to buy into the rising support trendline.

We’re preparing on our trading plans for a breakout but until that breakout occurs – and we’re not going to guess the direction – we’ll respect the range and maintain patience until the next price expansion phase.

Incorporate these key daily levels into your strategies (swing and intraday traders).