Britvic (LON:BVIC) had its price target boosted by research analysts at JPMorgan Chase & Co. from GBX 1,075 ($14.04) to GBX 1,120 ($14.63) in a report issued on Thursday, Price Targets.com reports. The brokerage currently has an “overweight” rating on the stock. JPMorgan Chase & Co.‘s target price would indicate a potential upside of 25.56% from the company’s previous close.

Several other research analysts also recently commented on the company. Berenberg Bank restated a “buy” rating and set a GBX 1,050 ($13.72) price objective on shares of Britvic in a report on Tuesday, November 9th. Deutsche Bank Aktiengesellschaft restated a “hold” rating on shares of Britvic in a report on Tuesday, October 19th. Finally, Royal Bank of Canada downgraded Britvic to a “sector perform” rating and cut their price target for the company from GBX 1,060 ($13.85) to GBX 870 ($11.37) in a report on Monday, October 11th. Four analysts have rated the stock with a hold rating and four have given a buy rating to the stock. According to data from MarketBeat, the stock has a consensus rating of “Buy” and an average price target of GBX 974.38 ($12.73).

Featured Story: How to Invest in an Index Fund 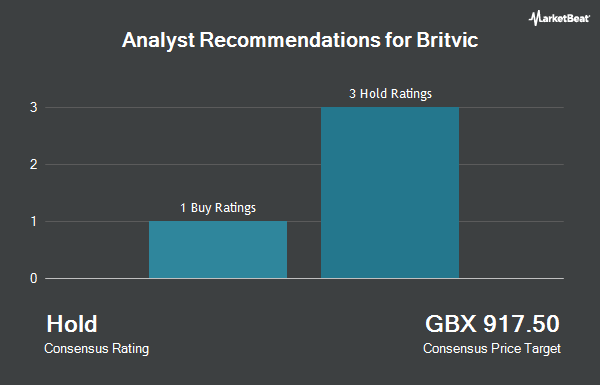