Rick Pendergraft: I received a bearish signal on Cisco Systems (NASDAQ:CSCO) when I ran my scans the other night. When I pulled up the chart, I couldn’t believe the number of things going on with the chart. The first two things that stood out were the upward trend and the overbought level on the stochastic readings.

Looking at the chart a little longer, I noticed the gaps in prices and assumed that those were earnings dates. Never being satisfied with an assumption, I looked the dates up and sure enough the big gaps I have marked on the chart are the last four earnings dates. Even after the gaps, there is a pattern. Can you find it without reading the text boxes in the chart below? 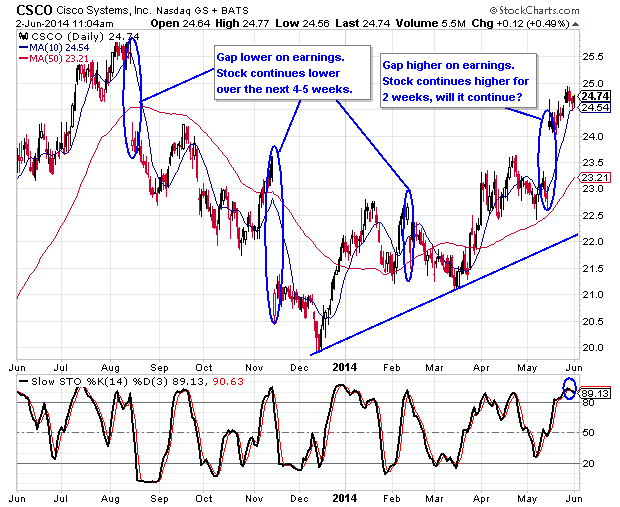 After each gap, the stock continues in the same direction as the gap for another four-five weeks and then it reverses course. In August, November and February the stock gapped lower and then moved even lower over the next month—almost exactly to the day. One month after the gap down, the stock reversed course and rose by at least $2 each time. On May 14, the stock gapped higher and has been rising since that time. Is the pattern going to play out on the opposite side, meaning that the stock will rise until approximately June 14 and then it will reverse course and drop by at least $2?