see a tsunami of store closings in January and February.  As you read this article, there is already more than a billion square feet of retail space sitting empty in the United States.  Many have described the ongoing collapse of the retail industry as an “apocalypse”, and this apocalypse appears to be accelerating.  Yes, the shift to online retailers is a significant factor, but as you will see below even online retailers struggled over the holiday weekend.  The sad truth of the matter is that U.S. consumers are tapped out and are drowning in debt at this point, so they simply do not have as much money to spend as they once did.

According to the National Retail Federation, 5.2 percent fewer Americans shopped online or at retail stores over the past weekend.  Those that did shop spent an average of 6.4 percent less money than consumers did last year.

So if less people shopped, and they spent less money on average, that means that total retail sales must have been way down.

And indeed they were.  As the New York Times has reported, total retail sales were down an astounding 11 percent…

Sales, both in stores and online, from Thanksgiving through the weekend were estimated to have dropped 11 percent, to $50.9 billion, from $57.4 billion last year, according to preliminary survey results released Sunday by the National Retail Federation. Sales fell despite many stores’ opening earlier than ever on Thanksgiving Day.

And though many retailers offered the same aggressive discounts online as they did in their stores, the web failed to attract more shoppers or spending over the four-day holiday weekend than it did last year, the group said. The average person who shopped over the weekend spent $159.55 at online retailers, down 10.2 percent from last year.

No wonder there was less violence on Black Friday this year.

Traffic at retailers was way down.

Of course some analysts are trying to put a positive spin on all of this.  For example, the CEO of the National Retail Federation says that this could actually be a sign that the economy is improving…

As the WSJ reports, NRF’s CEO Matt Shay attributed the drop to a combination of factors, including the fact that retailers moved promotions earlier this year in attempt to get people out sooner and avoid what happened last year when people didn’t finish their shopping because of bad weather.

Also did we mention the NRF is perpetually cheery and always desperate to put a metric ton of lipstick on a pig? Well, hold on to your hats folks:

He also attributed the declines to better online offerings and an improving economy where “people don’t feel the same psychological need to rush out and get the great deal that weekend, particularly if they expected to be more deals,” he said.

And of course the sprint vs marathon comparisons, such as this one: “The holiday season and the weekend are a marathon not a sprint,” NRF Chief Executive Officer Matthew Shay said on a conference call. Odd how that metaphor is never used when the (seasonally-adjusted) sprint beats the marathoners.

So there you have it: a 11% collapse in retail spending has just been spun as super bullish for the US economy, whereby US consumers aren’t spending because the economy is simply too strong, and the only reason they don’t spend is because they will spend much more later. Or something.

The retail industry is absolutely brutal at this point.  It is flooded with very large competitors that are chasing fewer and fewer disposable dollars.

In order to thrive, retailers need financially healthy consumers.  But over time, U.S. consumers have been getting deeper and deeper into debt.  The chart posted below shows that consumer credit in the United States has doubled since the year 2000… 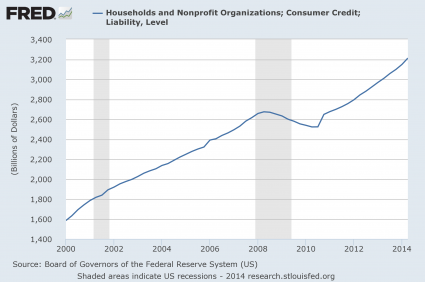 Meanwhile, the long-term trend for real median household income since the year 2000 has been down… 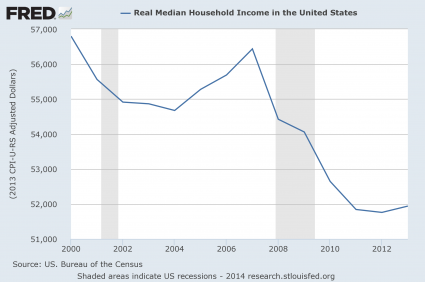 In order for Americans to spend money, they have to make money first.

Unfortunately, the quality of our jobs continues to plummet.

As I have written about previously, 50 percent of all American workers currently make less than $28,031 a year at their jobs.  And here are some more numbers from a report that the Social Security Administration recently released…

So in order for a typical American family to bring in $50,000 a year or more both parents usually have to work.

Sometimes they both have to work more than one job.

And with the cost of living constantly rising, family budgets are being squeezed more than ever.  That is why families have less money to spend at retail stores these days.  For even more on the current financial condition of American families, please see my previous article entitled “Are You Better Off This Thanksgiving Than You Were Last Thanksgiving?”

It is time for retailers in America to face the fact that economic conditions have fundamentally changed.  U.S. consumers simply are not in as good shape as they used to be.

In addition, online retailers are going to continue to steal sales from traditional retail locations.  This means that more stores are going to close and more retail space is going to be abandoned.

As I mentioned above, more than a billion square feet of retail space is aleady sitting vacant in the United States.  And retail consultant Howard Davidowitz is projecting that up to half of all shopping malls in the U.S. may shut down within the next couple of decades…

Within 15 to 20 years, retail consultant Howard Davidowitz expects as many as half of America’s shopping malls to fail. He predicts that only upscale shopping centers with anchors like Saks Fifth Avenue and Neiman Marcus will survive.

In the years ahead, it is going to become normal to see boarded up strip malls and abandoned shopping centers all over the country.

The golden age of retail is over, and now most retailers will have to work incredibly hard to survive the apocalypse that is unfolding right before our eyes.