Corey Rosenbloom: Even if we don’t trade commodities, it’s helpful to learn educational lessons and plan trades as they develop from interesting patterns.

Corn is forming a great potential Reversal Example, but we need to monitor it in real time to determine whether this time will be different, or whether we’ll just see a repeat pattern of the similar failed trend reversal signal from June 2014.

Here’s the current Reversal Pattern and the prior failed pattern in a strong downtrend: 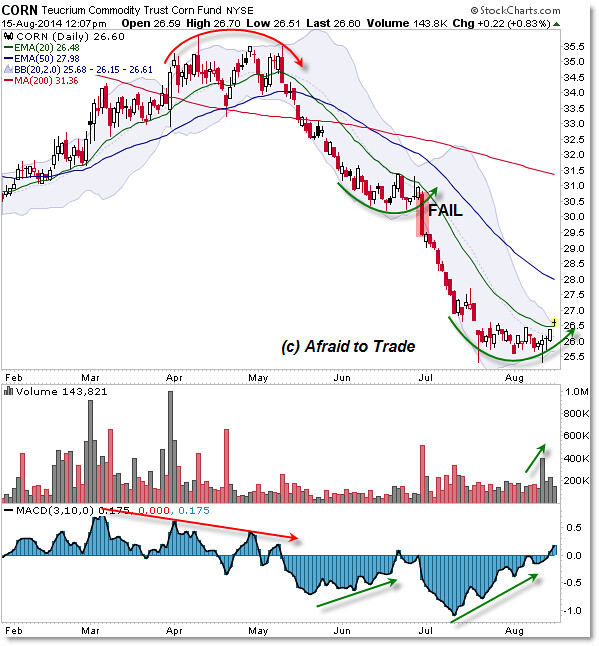 I’m showing the Teucrium Commodity Trust Corn Fund – an ETF – but you could also trade or monitor the actual corn futures contract (@C).

Let’s focus on two prior “Rounded Reversal with Divergence” patterns before discussing the current situation.

From April to May of 2014, Corn shares formed what I like to call a “Rounded Reversal with Divergences” pattern into the $35.50 per share (ETF) level.

Note the red line showing divergences in the Momentum Oscillator as price formed an ‘arc’ pattern or Rounded Reversal Dome.

Price triggered a liquidate/sell-short signal on the break beneath the rising 50 day EMA at the $34.00 per share level and a reversal was confirmed with sharp downside price action.

A possible support play and similar “Rounded Reversal with Divergences” developed through June, but price NEVER broke above the 20 day (or 50 day) EMA and the pattern FAILED to generate a reversal buy (breakout) signal and thus the sharp downtrend continued.

In fact,  note how price failed (traded down against) the falling 20 day EMA.