Patrick MontesDeOca: The VC Price Indicator predicted this last pull back that we have had sense the end of August.  I stated on the 23rd of August the following:  “It wouldn’t surprise me to see a short term pull back towards the end of next week and possibly into the middle of September.  We are in the early stages of the continuation of a screaming bull market in silver and gold, so I am not selling my current long term holdings.  I do plan on adding to these positions on the next pull back.”

Well it appears that the pull back has happened as discussed and I have been buying at these levels.  It appears to me, based off recent price action, that Silver is currently once again stuck in a tug of war.  In order for silver to maintain its bullish stance it is critical that we do not take out the most recent lows at 21.23 on the 4 hours chart seen below.  It is also important that we stay above the rising trend line seen on the daily’s.  If that trend line were to fail, we could possibly see a quick retest to $20/ounce.  Vice Versa, if this trend line holds and the most recent lows are not broken we could quickly see a run back up to the recent highs.  I am leaning towards the later of the two.  Next week will be key, as I expect volatility to return to the markets.  Enough with what I have to say though, lets look at what the charts are telling us. 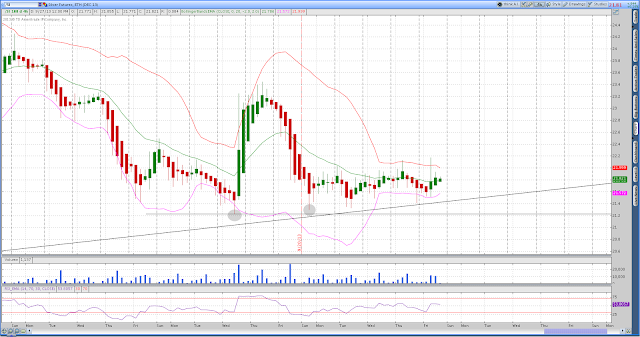 The above 4 hour chart is showing us a short term consolidation was needed in the silver market. The Bollinger Bands are tightening,  which is indicating that we are getting ready to have a decent size move in either direction.  It remains critical that 21.23 isn’t taken out.