Last week the shorts were all lined up for another bearish inventory report for Petroleum products from the EIA, but lo and behold, miracles do actually occur. We had an extremely bullish report (Fig. 1) which caught a lot of traders poorly positioned, and many fund managers underexposed to the commodity, which relative to Gold, Silver, and Copper, smelled like a bargain in the face of further quantitative easing expected by the Federal Reserve in the 4 th quarter. 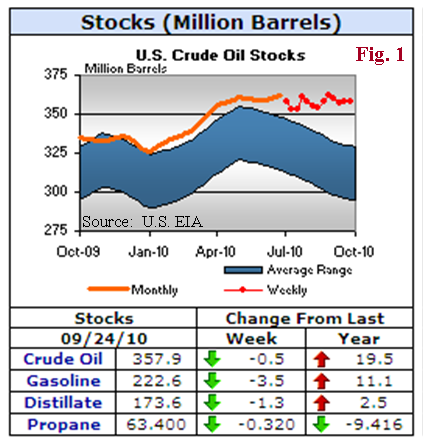 The technicals indicate that upward resistance will not be found until the $84 a barrel level, so despite Crude Oil moving from roughly $75.60 before the report on Wednesday morning to close Friday`s electronic session at $81.73, a $6.13 move in 3 days, there is still more room to go for this upward move in the commodity.  (Fig. 2)

The real surprise in the report was the large drop–3.5 million barrels– in gasoline inventories, and the RBOB contract needed to re-price itself given this change which was largely due to lower imports on the supply side, as demand for gasoline is still relatively anemic year on year.

Distillate demand has recovered strongly over the last 6 weeks from the lows of the summer (Fig. 3), and is quite robust year on year, and a great sign that the double dip scenario is officially off the table. Remember, that distillate demand represents usage from the industrial and manufacturing sectors of the economy which will be the first indications of potential economic strength or weakness. 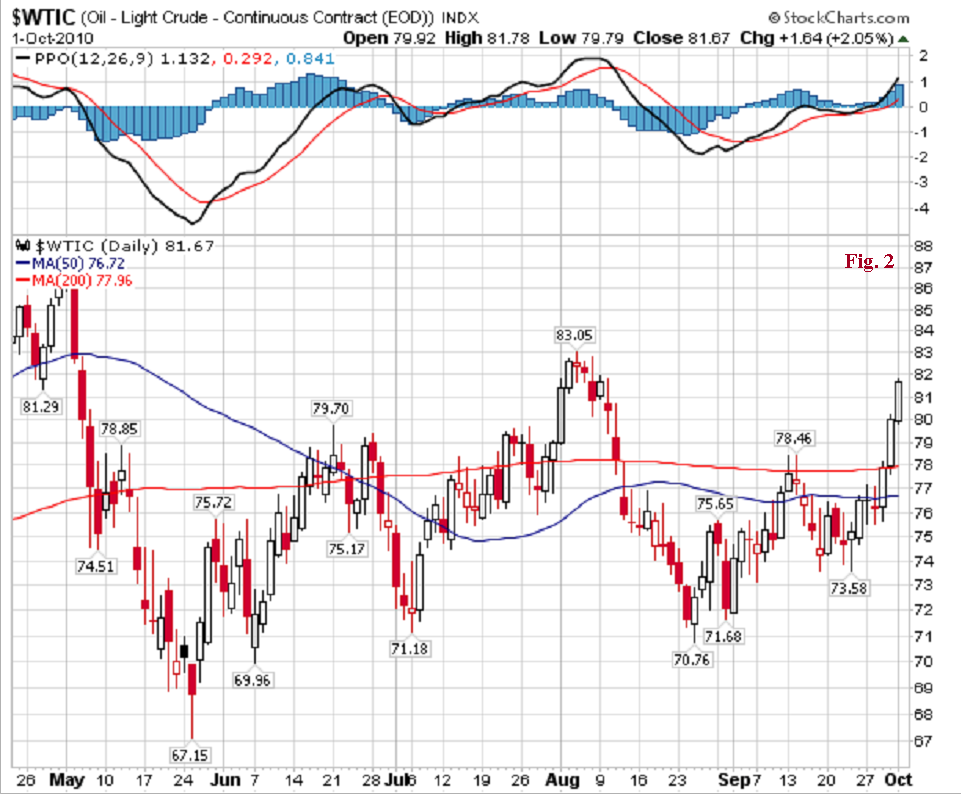 Expect crude to test the $84 level sometime Monday or Tuesday, and hold below that level before the upcoming inventory report on Wednesday morning. Even if we have another relatively bullish inventory report expect crude to have some solid resistance near $85 a barrel for the week, as the move would be a little overdone in such a short timeframe. It is natural to expect several pullbacks on volatility and profit taking during the week with a potential weekly trading range from $80.50 to $85.70 give or take 30 cents in either direction.

But the longer term trend is clear as traders and fund managers want to be strategically exposed to Oil from this point forward, as the real upward move is just now starting, expect crude oil to hit $100 a barrel by January , and only going higher from there. The signs are there for this scenario, a strengthening euro, weakening dollar, global currency devaluation races fueling all commodities, Oil Moratorium and anti-drilling sentiment from Washington, globally escalating energy needs, global QE2 programs, and natural Inflation Trends. 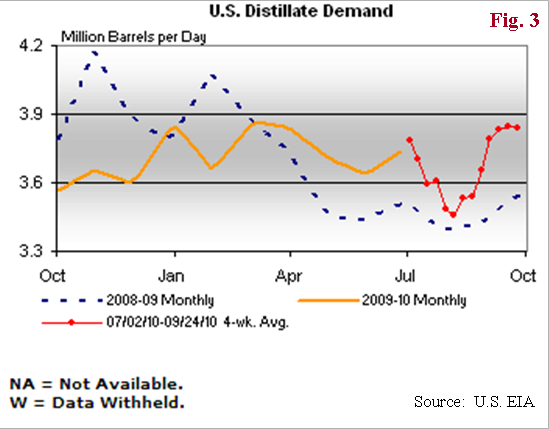 All one has to do for validation of this thesis is look at Silver at $22 an ounce, and realize that the only thing holding Crude Oil from a $100 a barrel was supply overhangs. It appears that those will be quickly worked off as both the US and global economy are now past the double dip scares. Expect future business confidence and spending to pick up, and with some pro business initiatives around the corner after the elections in November, expect unemployment to start dropping in a meaningful way.

All this portends for not only a monetary-inflation argument for owning Oil, but the fundamentals are now starting to turn, as illustrated by the Distillate demand recovery (Fig. 3), expect gasoline and crude to follow suit, and now you have the makings of a runaway bull market in this explosive commodity.

Moreover, the one element that has been absent from Crude Oil is the lack of a definable trend like the Gold Market.  Well, expect that to change.  From now through 2011`s Summer Driving Season, crude oil should establish a clear upward trend, which attracts further investment capital, ultimately reinforcing the momentum of the move. This is one of the ironies of financial markets, the higher an asset climbs in price, the more attractive it becomes to investors.

So Crude Oil will become the poster child for the success of the anti-deflationary campaign of the Federal Reserve, but we can all look forward to the Political Blame Game over $150 a barrel oil, Congressional hearings on Oil speculation, National Debates on Energy Policy, and attractively discounted Hummers for sale on CARMAX lots.

Written by By Dian L. Chu, Economic Forecasts & Opinions
About: Economic Forecasts & Opinions The theory of quantum mechanics and Einstein’s theory of relativity (E=mc2) have taught us that matter (yin) and energy (yang) are inter-related and interdependent. This interconnectness of all things is the essense of the concept “yin-yang”, and Einstein’s fundamental equation: matter equals energy.  The same theories may be applied to equities and commodity markets. All things within the markets and macro-economy undergo constant change and transformation, and everything is interconnected.  That’s why here at Economic Forecasts & Opinions, we focus on identifying the fundamental theories of cause and effect in the markets to help you achieve a great continuum of portfolio yin-yang equilibrium.