After trading to a low of $20.28 per barrel on the active month August NYMEX crude oil futures contract on April 22, the energy commodity has made higher lows and higher highs. The bottom end of the gap on the chart from March at $42.17 per barrel remains a target. Voids on charts tend to act as a magnet for price action. The most recent high at $41.63 on June 23 gave way to a correction, but the price only fell to $37.08 per barrel. At the end of last week, crude oil was trading just over the $40 per barrel level again.

In an epic battle between supply and demand, producers worldwide have adjusted their output levels to balance the market. The rise in the number of Coronavirus cases in the United States continues to threaten the demand side of the fundamental equation. The potential for new shutdowns of businesses and stay at home orders across parts of the US weighs on the demand side, while the falling output is a supportive factor for the price of oil, which is at a crossroads. We should continue to expect periods of wide price variance in the oil market based on the global pandemic, the producer’s reaction, and the potential for surprises from the Middle East. The trend in crude oil remains higher, but it is fragile, at best. The United States Oil Fund (USO) tracks the price action in the WTI futures market on the NYMEX division of the CME.

The demand side of the fundamental equation for crude oil continues to plague the price of the energy commodity. Producers around the globe have cut output to balance supply and demand. The 9.7 million barrel per day reduction by OPEC, Russia, and other producers went a long way to lift the price of both WTI and Brent futures to the $40 per barrel level. In the US, the natural decline of production because of low prices has added to the efforts to cut output. According to Baker Hughes, the number of oil rigs operating in the United States fell by three as of July 2. Only 185 rigs were pumping oil from the crust of the earth compared to 788 in early July 2019.

As world producers continue to make best efforts to address the supply side of the equation, the latest data from the American Petroleum Institute and Energy Information Administration provided a reason why the price was sitting above $40 per barrel at the end of the holiday-shortened week on July 2.

Bullish inventory data at the end of June

Last week, the API reported an 8.156-million-barrel draw from inventories for the week ending on June 26. The market had expected a draw of only 761,000 barrels. On Wednesday, July 1, the EIA said that crude oil stockpiles fell by 7.20 million barrels. The withdrawals were the most significant of 2020 and pushed the price of WTI futures back over the $40 per barrel level.

When it comes to oil products, The API said gasoline stocks fell by 2.459 million barrels, while distillate stockpiles rose 2.638 million. The EIA reported that gasoline rose by 1.2 million while distillate fell 600,000 barrels. The inventory data from both sources was bullish for the price of the energy commodity. Moreover, daily US output at 11 million barrels per day remained 16% below the March all-time peak at 13.1 mbpd.

After months of rising stockpiles and evaporation of demand, the production cuts that run through the end of July and US output declines have balanced the oil market around $40. As the number of coronavirus cases rise, the potential for further demand shocks remains a clear and present danger for the energy commodity.

The term structure or forward curve for crude oil often serves as a real-time indicator of supply and demand. At the height of the risk-off period in crude oil that took the price into negative territory in late April, the August 2020 versus August 2021 spread traded to a high of $10.19 contango, where August 2021 was at a premium to crude oil for delivery in August 2020. 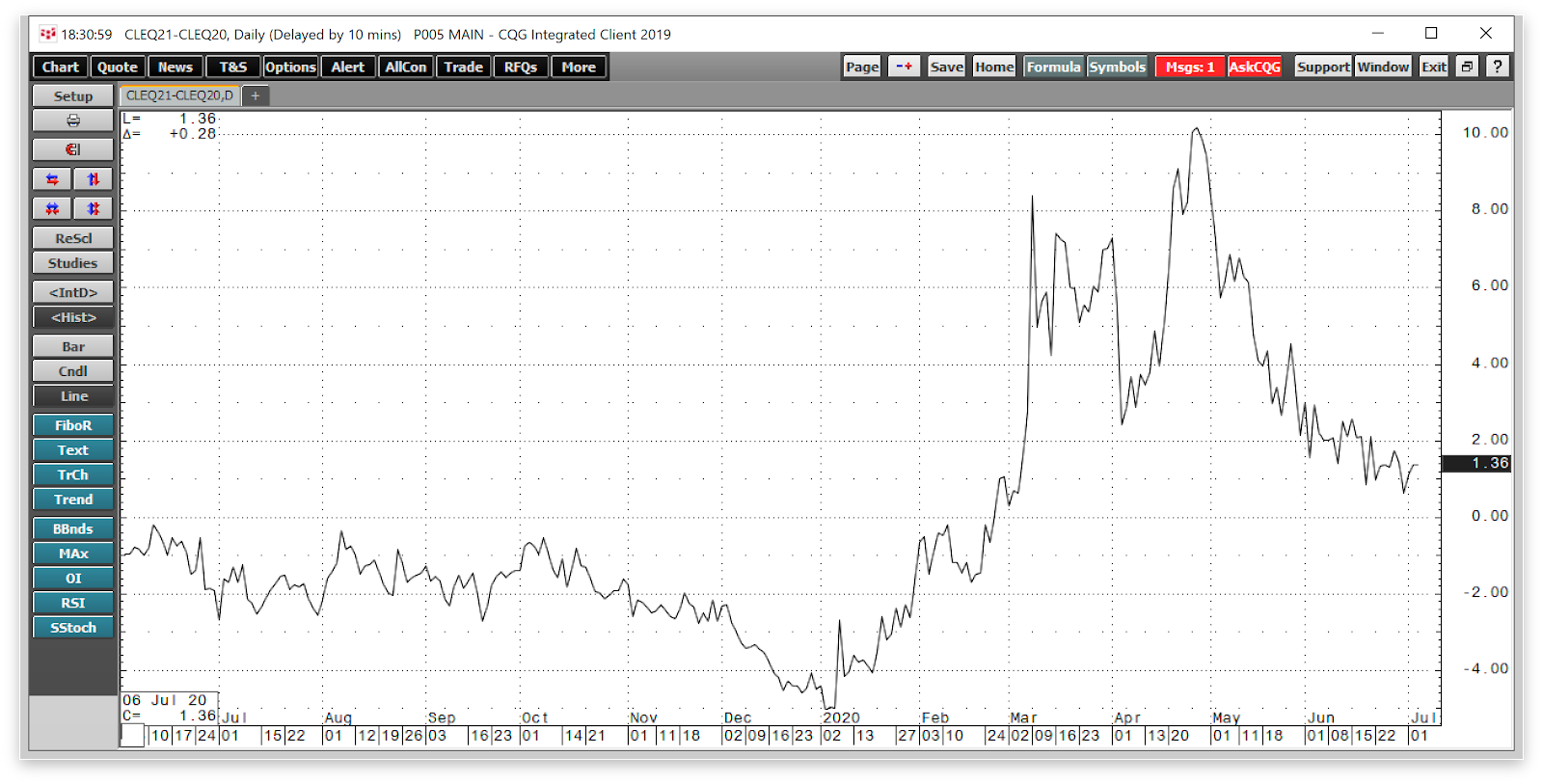 As the chart shows, the spread has tightened to a $1.34 premium for the August 2021 crude oil, which is a sign that production declines are working to balance the supply and demand equation in the energy commodity. The one-year Brent September 2020 versus September 2021 spread tightened to the $1.78 per barrel level as of the close of business on July 2.

The price of crude oil was at a crossroads at the end of last week. While the August WTI contract seems destined to fill the gap on the chart up to $42.17 and September Brent futures will likely fill its void up to $46.41, any gains above those levels depend on rising demand in the current environment.

Coronavirus remains a critical factor when it comes to the demand for crude oil. Expect lots of volatility and surprises over the coming days and weeks. Keep stops tight and take profits when they are on the table. Trading rather than investing tends to be the optimal approach in volatile markets like crude oil.

Is the Bull S#*t Rally FINALLY Over?

USO currently has an ETF Daily News SMART Grade of D (Sell), and is ranked #64 of 112 ETFs in the Commodity ETFs category.