From Zacks: Turkey held a referendum on Sunday, April 16, 2017 per the results of which the powers of President Recep Tayyip Erdogan are set to increase manifold.

The unofficial results showed the ‘Yes’ camp had the majority with a little over 51% of the votes. The vote has further divided the nation. While supporters claim that it will bring stability to the nation, opponents dread a one-man rule.

If and when implemented, the new system will give the president a stronghold in the functioning of the country. Erdogan will no longer be accountable to the country’s parliament and will take on the functions of the prime minister. He will have exceptional powers to shape up the budgetary policies and the executive branch.

Moreover, with extensive powers over the judiciary and amendments allowing him to run for additional terms, opponents fear that Turkey is on track to become an authoritarian state from a democratic state. The opponents questioned the legitimacy of the referendum as a change in law allowed unstamped votes in the referendum. They have appealed for a recount of more than 60% of the votes. However, the win was declared legitimate by Turkey’s electoral body, despite claims of foul play by the opposition.

What’s even scarier is Erdogan’s stance on death penalty. He would seek to bring back death penalty by holding a referendum on the issue. A ‘Yes’ vote will likely thwart any chance of Turkey joining the European Union, something that the country has been trying for a long time now (read: Is Turkey’s EU Hopes Over? ETF in Focus).

All in all, the outlook for the country seems bleak given the political uncertainty and diminishing democratic ideologies. We, therefore, believe it is in best interest to avoid the Turkey ETF for now. Let us discuss TUR in detail.

This ETF is the only such fund in the space offering exposure to Turkey-based equities. It has AUM of $392.9 million and charges a fee of 64 basis points a year. The fund has top holdings in Financials, Industrials, and Consumer Staples sectors, with 44.18%, 12.51%, and 11.31% allocation, respectively (as of April 13, 2017). From an individual holdings perspective, the fund has top holdings in Turkiye Garanti Bankasi, Akbank, and Bim Birlesik Magazalar, with 11.15%, 10.09%, and 6.16% allocation, respectively. It returned 11.86% in the year-to-date timeframe but lost 21.03% in the past one year. TUR currently has a Zacks ETF Rank #4 (Sell) with a High risk outlook.

We will now compare the fund’s performance to a broader Emerging Markets ETF, EEM.

This fund is the most popular in the emerging market equity space with $29.90 billion in AUM. 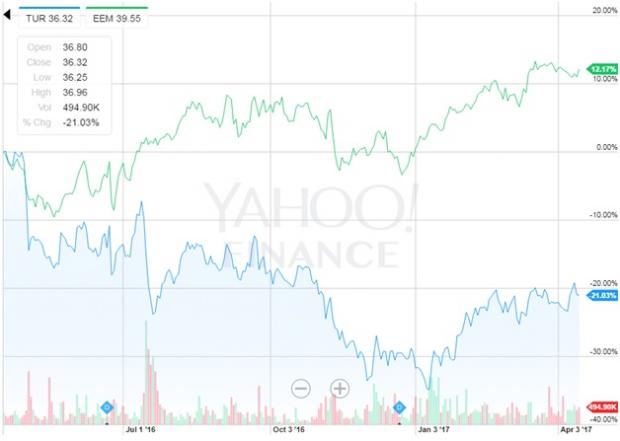 The iShares MSCI Turkey Investable Market Index Fund (NYSE:TUR) was unchanged in premarket trading Friday. Year-to-date, TUR has gained 15.95%, versus a 5.28% rise in the benchmark S&P 500 index during the same period.

TUR currently has an ETF Daily News SMART Grade of B (Buy), and is ranked #57 of 77 ETFs in the Emerging Markets Equities ETFs category.