Before Trump’s announcement in the Rose Garden, a senior administration official explained that the money will be pulled from the following areas:

The $1.375 billion, which is part of a spending bill passed by Congress, is short of the $5.7 billion that Trump had asked for late last year but didn’t get. A fight over the barrier money led to a record-long partial government shutdown that was resolved after 35 days. What’s more, the $1.375 billion would specifically not allow construction of new wall prototypes proposed by Trump, and would instead put money toward 55 miles of bollard fencing.

“We fight wars that are 6,000 miles away, wars that we never should have been in. But we don’t control our own border. So we are going to confront the national security crisis on our southern border, and we’re going to do it one way or the other. We have to do it,” Trump said.

Trump also said that if there was a physical barrier at the southern border, “we’d save tremendous, just a tremendous amount on, would be sending the military. If we had a wall we don’t need the military, cause we’d have a wall!”

The Pentagon announced earlier this month that it would send a deployment of about 3,750 troops to the U.S. border with Mexico. The additional troops will bring the total number of forces supporting the border mission to approximately 4,350, according to estimates provided by the Department of Defense. 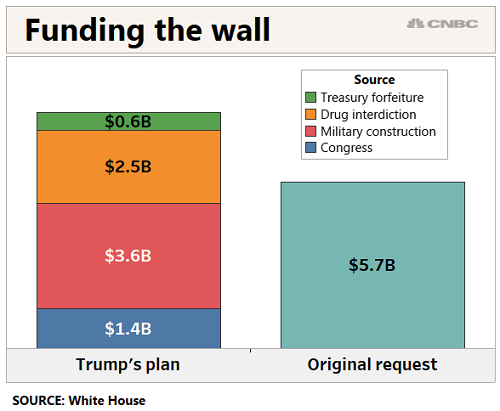 The troop deployment, which was approved by acting Defense Secretary Patrick Shanahan on Jan. 11, will last for 90 days. The border mission includes mobile surveillance capability as well as the emplacement of approximately 150 miles of concertina wire between ports of entry.

A congressional aide, who spoke on condition of anonymity, said Trump can divert roughly $21 billion in military construction funds that aren’t already obligated for use on border projects. Some of the $21 billion will be taken from the “wartime funds” account, which is known as the overseas contingency operations, or OCO.

“[The president] is free to spend without a vote from Congress,” the aide said of the immediately available $21 billion. “He has to notify Congress of what he’s done but he doesn’t have to come to Congress to do it.”

DIA currently has an ETF Daily News SMART Grade of A (Strong Buy), and is ranked #4 of 82 ETFs in the Large Cap Value ETFs category.