Toby Connor:  When priced in something that has real value and cannot be debased (gold), one can clearly see that stocks have been in a severe bear market since 2000. (If one were to look at PE valuations during the same period they would see the same bear market.)

In the chart below I have marked the final phase of several gold C-waves. These highly speculative periods tend to end as a parabolic blowoff rally with gold stretched quite far above the 200 day moving average. The final phase of a C wave rally also tends to correspond with another leg down in the Dow:gold ratio. 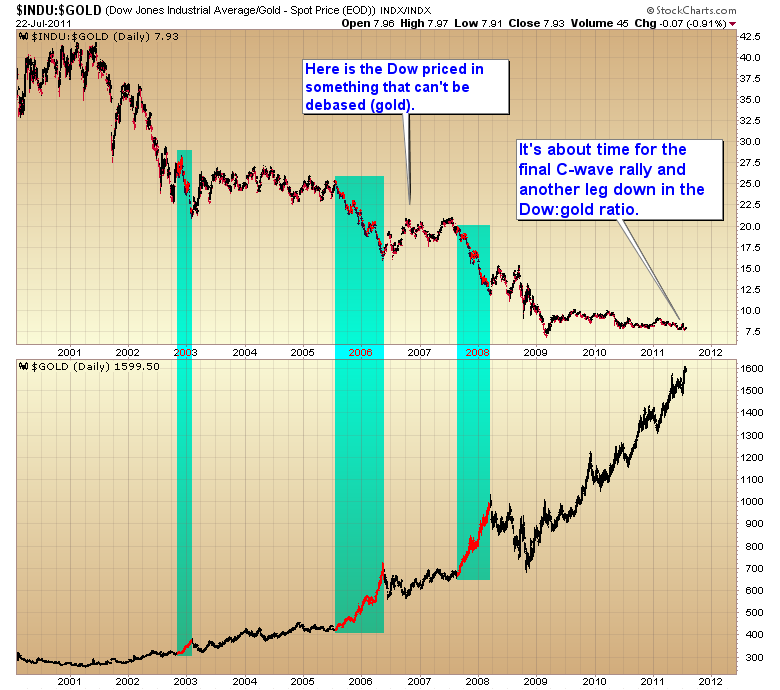 After an extended two year consolidation I think we are now due for that final explosive move that should drive the next repricing of stocks against gold.

I expect we will see a combination of gold rallying wildly higher while stocks rollover into the next cyclical bear market. I’m looking for a Dow:gold ratio somewhere around 6 to 1 later this fall. If gold rallies to $1800 (my best guess) then we can look for the Dow to drop down around 10,000.

As many of you may have noticed stocks tend to put in major intermediate lows in November and March. The dollar often forms it’s yearly cycle low in November. If the dollars three-year cycle bottom is still ahead of us, and it’s starting to appear that it is, then the currency crisis that we avoided in May should come in late October or November this year.

That currency crisis should drive the final parabolic C-wave move in gold and the first major leg down in the stock market. 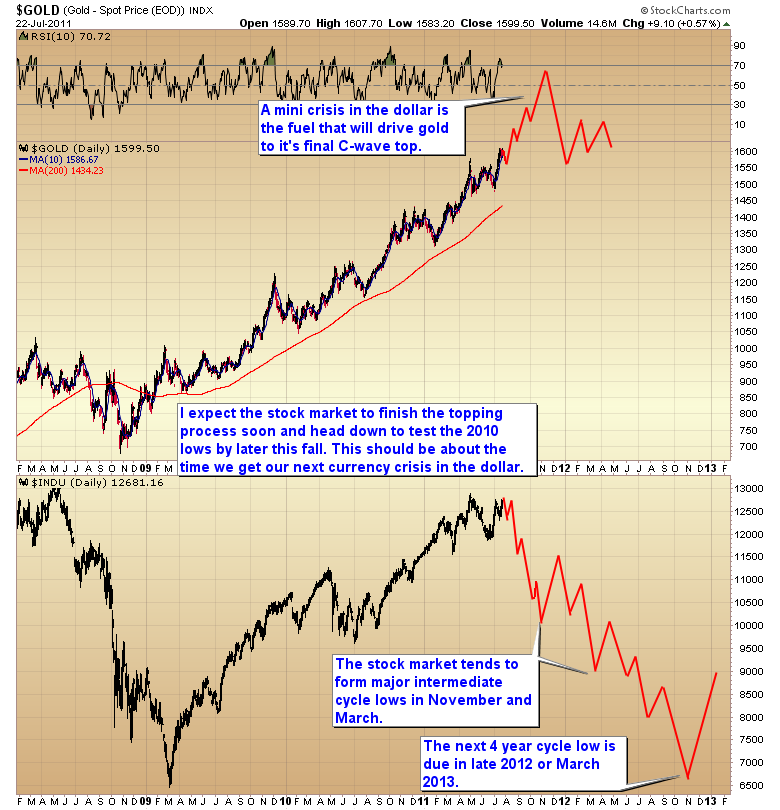 We should then see a relief rally in stocks as the dollar crisis comes to an end and gold will enter a severe D-wave, regression to the mean, profit-taking event.

The relief rally in stocks unfortunately will be short-lived. With no true productivity to drive it the stock market is not going to be able to fight a rising dollar.

Now that the last true period of productivity has ended (the personal computer and Internet boom) the only way stocks can resist the forces of the secular bear is through expansion of the money supply. That becomes painfully obvious when one looks at a 10 year chart of the Dow priced in gold.

The problem of course is that printing money is not true productivity. Printing money has consequences, as we found out in 2008.

It won’t be long before we begin to suffer the consequences of Bernanke churning out trillions of dollars to save the financial system.

But who’s gonna save us from Bernanke!