Best Online Trades: I have been trying to come up with a valid long legged hammer candlestick reversal trading strategy.  So far I am still in the exploratory stages and have not been able to come up with a perfectly clear system on how to trade them.

I am mostly interested in the LONG LEGGED (also known as a long bottoming tail) variety of hammer reversal candlesticks.  Hammer candlesticks are a dime a dozen, but the LONG LEGGED variety are not, they are quite rare, and when they actually do show up they present some potentially interesting trading dynamics.

The general goal is to achieve between a 5% to 10% return consistently with these signals.  Of course there always exists the chance for a greater return than that using a % trailing stop for example, but the initial quest is to only achieve a 5 to 10% return per setup.

The challenging aspect of these one day candlestick patterns is WHERE they show up in the life cycle of a stock price chart.  Where they actually show up makes a big difference as to whether they qualify as a good setup or not.  For example if a long legged hammer candlestick shows up deep within a heavy congestion range it offers a less clear signal to me.  However if a long legged hammer candlestick shows up as an outside day, and the low of the hammer as right near a long supportive trading range of a few months ago, then the trading setup is potentially much more powerful.

This is not necessarily a problem since the long legged variety of hammer candlesticks are rare enough that one can examine the few that come along every few weeks.

I have seen many scans for hammer reversal candlesticks on the free stock scan websites on the internet, but I have not been able to find a good online scan that consistently identifies the LONG LEGGED variety of hammer candlestick reversal.

Instead I made a custom Metastock scan that so far does a pretty good job of churning out a few potentials per week.  It is far from perfect but does a good enough job that only requires me to view maybe about 10 charts per day.

The scan is essentially as follows:

So it identifies candlesticks with a long lower shadow, a million shares or greater and an intra day volatility of 5% or greater.

One reason is that we are attempting to identify a change in trend from down to up.  Typically bottoms in stocks are made more suddenly and quickly than tops.  The long bottoming tail hammer candlestick reversal describes a situation of short term panic.  The longer the tail on the candlestick, the greater the depth of the panic.

So to a certain extent there is an extinguishing of longs (also known as capitulation) after the completion of the long bottoming tail candlestick.  I can tell you first hand that I have been ‘inside’ long bottoming tail hammer reversal candlesticks at the lows and have sold right at the lows in the past only to see the stock trade back up near the open and even close higher by the end of the day.  So I know quite clearly in my mind what it is like to be inside one and the intensity of the capitulation at the lows and also the regretful emotion of having bailed out right near the lows only to see the stock trade unchanged by the close.

Those who shorted at the beginning of the day are likely the ‘late shorts’ and by the end of the day find themselves either at break even or at a slight loss, after previously having sizeable intra day gains.

Depending on what happens the next day, the shorts may have to immediately cover or stand by for a while to see if there is some more down trend left.

A Long Bottoming Tail Hammer Candlestick is a Trading Range

On an intraday basis a long tail hammer candlestick defines a clear trading range with a high and a low.  This is the best way to frame the market structure.  We have a low point and a high point marked by the high of the day and the low of the day.

To me, the low of the hammer represents a potentially powerful support zone and a level that needs to be observed very carefully for signs of reversal on the assumption that price can drift back down to that level.

The high represents the resistance and is the level that needs to be exceeded AND that needs to hold as support for the stock to be able to continue higher with new trend strength. 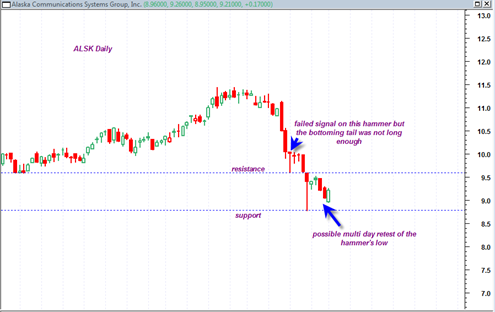 Alaska Communications Systems Group Inc. (NASDAQ:ALSK) is a stock that came up in the Metastock scan several days ago. One can see that the first hammer reversal did not lead to a good signal.  Three days later the stock continued to break down.

The most recent hammer reversal candlestick may have more promise, but once again we see that price is drifting back down towards the low point of the hammer.  This is a key point.  After every long bottoming tail reversal hammer there exists the potential that the price will then drift back down to retest the low of the hammer reversal at which point a possible strong buy signal is generated.

In some cases the price will do a full retest and in others only a ‘half retest’.

It seems to me that the best trading approach with long bottoming tail hammer candlestick reversals is as follows:

A. For hammers that form during very steep or near vertical down trends:

Wait at least 3 trading days after the hammer candlestick is formed to get a better picture of how the stock wants to react and whether it will be able to reverse trend.

In the case of ALSK above we see that the stock is already in its fifth day after the hammer reversal and the stock still remains in a downtrend.  So the best potentials are for the price to head back down to the low of the hammer at 8.78 and then watch for a very strong reversal.

Ideally one would want to see the 8.78 level pierced slightly and then see the stock trade back above 8.78 and maintain a stance above 8.78 on the following days.  If this occurs it will have created a 2B buy signal because price fell under support and then traded back above it and held back inside the range.

B. For hammers that form in strong uptrends after minor consolidations or after the handle portions of cup and handles are almost complete.

It may be somewhat common for either normal hammers or long tail hammer candlesticks to form near the end of cup and handle formations.  They can be superb signals that the stock is ready to break out.  The follow on price action after these hammers has a good potential for a gap higher opening the next day. 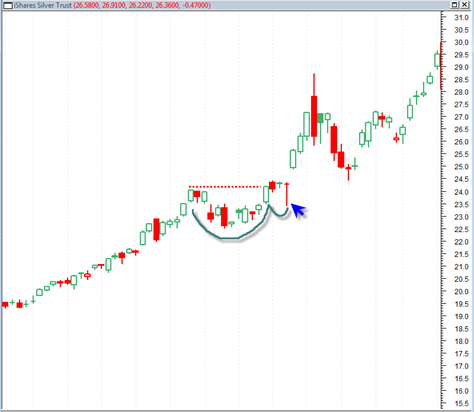 The iShares Silver Trust ETF (NYSE:SLV) was a good example of a long tail hammer candlestick that formed not only after a very strong uptrend, but also at the end of  a cup and handle formation.

In this case the (SLV) gapped up the next day and powered higher for 3 or 4 days thereafter.  So with this type of hammer reversal setup there is a greater chance that the stock will deliver upside results much sooner and in stronger fashion because of the strength of the previous uptrend.

Obviously waiting 3 trading days after the hammer reversal in SLV above would have been a lost opportunity.

So in my view there are 5 possible outcomes after a long tail hammer reversal candlestick occurs:

2. The stock will gap up the very next day but then start to drift down in retest fashion of the high (support) range of the hammer and then break back down below the high (support range), creating a 2B sell signal.

3. The next day the stock will open within the hammer body and start a consolidation process and it may start an attempt at a retest of partial retest of the hammer’s low point (especially for stocks that have been in strong or moderate down trends).  Then after reaching the low point the stock finds new demand and start to trade in a new uptrend.

4. The next day the stock trades inside the hammer and starts to drift down and then trades only slightly under the low of the hammer, but then moves back up inside this low creating a 2B buy signal.

5.  The next day the stock will trade inside the hammer and start to drift down and attempt a retest of the low of the hammer but then continues very fast below the hammers low and fails to hold support, continuing the down trend.

There are clearly a range of possibilities after a long tail reversal hammer occurs.  One thing remains clear, that there is a strong reliance on the judgment of WHERE and in what context the hammer reversal is occurring.  It is NOT enough just to identify the hammer reversal.  We must take it in context of where it is occurring and act accordingly.

The nice thing about hammer candlestick reversals is that they can occur in strong bull markets or during the depths of bear market declines and can create similar signals and results.  The psychology of these patterns are the same on the shorter term time frames (1 to 10 trading days).

I will follow up on the ALSK stock above at some point to see what can be learned from that reversal and maybe some others in the future as I try to fine tune the interpretation of how to deal with this potent reversal signal.

So my initial approach is as follows:

So these are my initial thoughts on the long tail hammer candlesticks.  More to come on this super candlestick signal in future posts…