How much prices jump depends on the extent of damage and the length of the outage, which coincided with peak summer driving. For now, analysts are expecting to see a jump of about 5 cents per gallon for drivers in the mid-Atlantic region, which is served by Philadelphia Energy Solutions refinery, the largest and oldest on the East Coast.

“This refining outage couldn’t come at a worse time for consumers, given the backdrop of the tensions with Iran only exasperating the rising price environment for oil,” said John Kilduff, partner with Again Capital.

The refining company said the cause of several blasts at one of its alkylation units early Friday is under investigation, and the refinery is operating at a reduced rate. Alkylation units provide octane for making premium gasoline.

The explosion occurred just as U.S. gasoline demand hit an all-time high last week. The pressure on gasoline prices also comes at a volatile time for oil prices, up more than 9% this week, after plummeting about 20% this spring.

Wells Fargo analysts said East Coast fuel prices could rise by 3 to 5 cents a gallon, based on incremental import costs. For now, gasoline supply is sufficient in the U.S., so the main price impact should not spread beyond the region.

Analysts said the impact could remain at several cents per gallon in the mid-Atlantic region, unless there are other disruptions or the outage is extended. The national average for unleaded gasoline at the pump was $2.66 per gallon Friday, but it has been slightly higher in Pennsylvania, at $2.82; New Jersey, $2.75 and New York, $2.85, according to AAA.

Tom Kloza, global head of energy analysis at Oil Price Information Service, said he does not believe the outage will be a major problem for the U.S. gasoline market, which is well supplied — even with a number of Gulf Coast refineries still in extended maintenance. 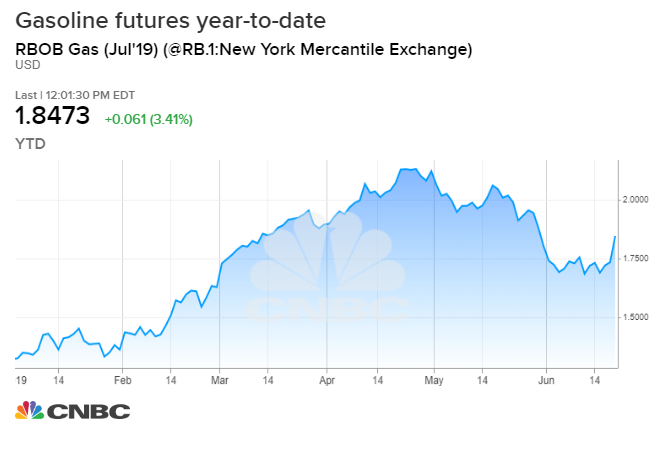 He said the Philadelphia refinery is actually two refineries — one a legacy Atlantic Richfield refinery and the other a legacy Gulf operation, and it appears only one part may be damaged, leaving the other to continue operations.

It will be important to see how extensive the damage is and whether it extends beyond the alkylation unit. “It’s a key element in hitting the octane threshold. It could hamstring their ability to make premium fuel,” he said.

He said gas prices, which have been falling, could instead now find support. “Because of Iran and higher crude prices, I suspect we’ll see higher RBOB prices. Instead of falling 10 to 15 cents, it could go up 5 cents a gallon,” he said. RBOB futures represent gasoline prices in the New York Harbor, which is supplied by the Philadelphia refinery, among others.

RBOB gasoline futures for July were 3.3% higher Friday, at $1.85 per gallon. At the pump, retail prices are down 20 cents a gallon from last year for unleaded gasoline. The price is also down 4 cents from last week’s $2.70, and 18 cents from a month ago.

Sal Risalvato, executive director, New Jersey Gasoline, C-Store and Automotive Association, said that before the explosion, he already saw prices rise this week at the wholesale rack, where trucks fill up for New Jersey gas station deliveries. Some prices were up as much as 4 cents per gallon Thursday, based on the oil price jump, he said.

“I’m seeing right now at least in the short term, you’re going to see prices go up,” said Risalvato. “It wouldn’t surprise me if when I get my rack prices tonight at midnight that gas went up 5 to 10 cents. Will you sees that at the pump right away? You might. Once there’s an announcement the refinery is back on line, the price will go back down.”

Andrew Lipow, president of Lipow Oil Associates, said the part of the refining complex affected is the Girard Point section, which represents about 16% of East Coast refining capacity.

“For the consumer, it’s bad news because the futures market reacted immediately and was up as much as 8 cents a gallon, but it has come down. There’s more than adequate supplies of gasoline inventories along the East Coast. What I would expect is that local inventories would be drawn until resupplies from either imports from Europe or vessels loading the Gulf Coast make their way to the East Coast,” said Lipow.

Kloza said the refinery fire could have a noticeable impact because it is a refinery that feeds the market for New York harbor gasoline, which is reflected in the price of RBOB futures on the NYMEX.

“I don’t think this is a huge deal. These things happen. It is a refinery that feeds NYMEX,” said Kloza. He said there is plenty of fuel available for the region from other parts of the North Atlantic, like Europe and Canada and the U.S.

“We’ll see a little more European gasoline coming in to the U.S. There’s plenty of Gulf Coast production coming on line, and the Colonial pipeline will be full through August.”

The Colonial pipeline brings gasoline from the Gulf Coast up the East Coast to the New York area market.

“The market is well supplied and it will be better supplied as these refineries on the Gulf Coast are restarted and there are a lot of them being restarted. We still have another 700,000/800,000 of refining capacity that’s yet to return from extended spring maintenance,” said Kloza.

Kloza said refineries have used the typical seasonal downtime to make adjustments so they can produce a new lower sulfur marine fuel, required globally at the beginning of next year.

Kloza said gasoline prices have been under pressure, and RBOB peaked in May at about $2.12 per gallon before plummeting with oil prices, to a low below $1.70 this month. On Friday, it was at $1.85.

“The tremendous downdrafts we’ve seen looking at in gasoline have been arrested by things happening by the Straits of Hormuz, and this will at least stabilize gasoline futures,” Kloza said.

UGA currently has an ETF Daily News SMART Grade of A (Strong Buy), and is ranked #13 of 109 ETFs in the Commodity ETFs category.