It’s been a wild couple of weeks for the Gold Miners Index (GDX), with the widest swings for the gold producers that we’ve seen in years. Fortunately, for investors, the GDX has ridden gold’s (GLD) coattails and has now recouped more than half of its losses since the beginning of March. While the nearly unprecedented volatility and sharp decline have likely shaken many investors out of their gold stocks, the long-term charts for gold miners remain intact for now, without any material damage inflicted yet. The key to keeping momentum in the bulls’ favor, however, is the bulls defending the $19.00 level on the 2020 close. A drop beneath $19.00 to finish 2020 would shift the momentum back to bearish and would put a dent in the long-term charts for the index. Let’s take a closer below: 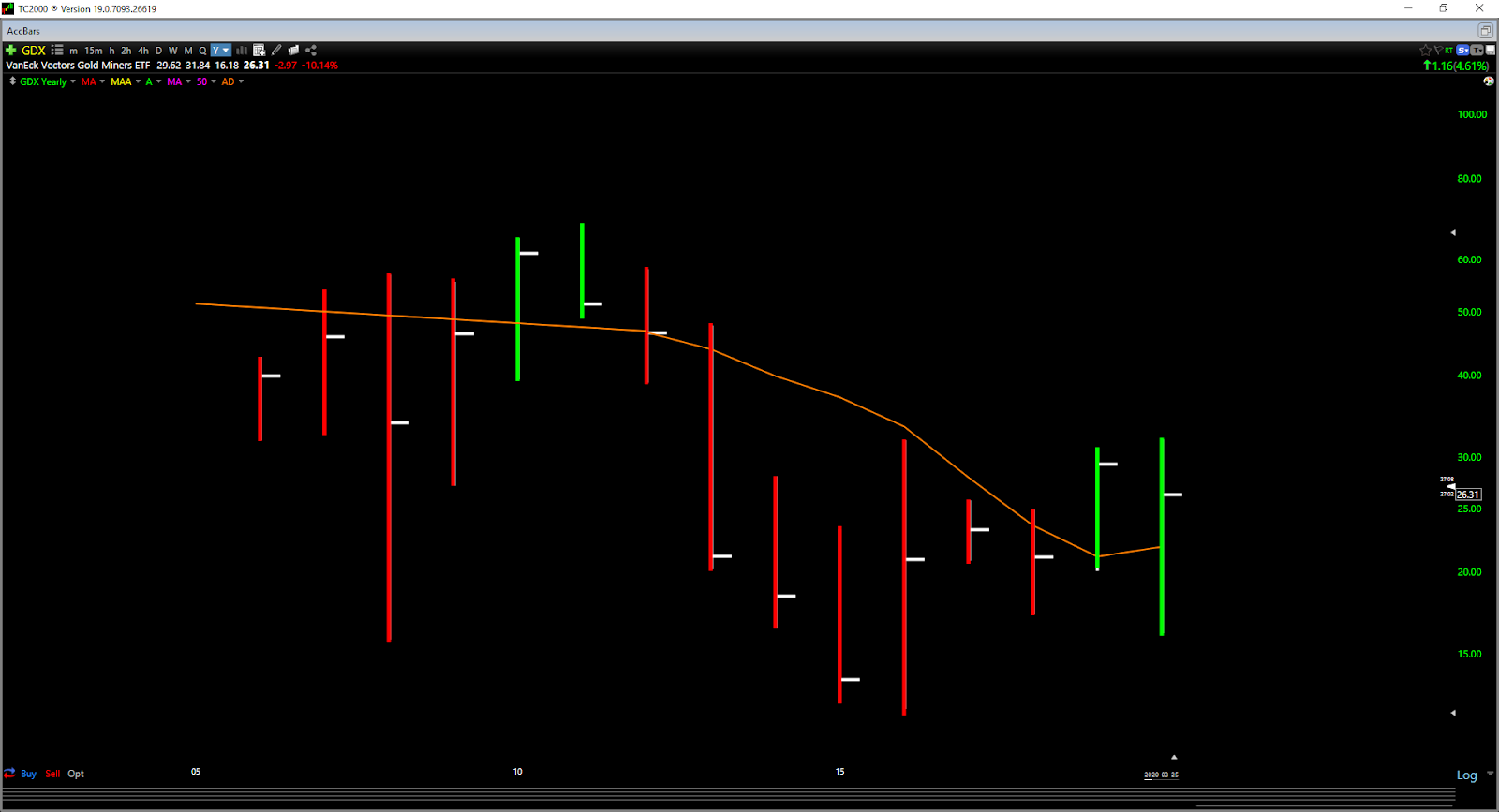 I like to use yearly charts to put things in perspective better, especially when volatility is at its highest like we’ve seen given the COVID-19 induced scare. As the yearly chart above shows for the GDX, the annual moving average has been a helpful guide to defining bull and bear markets for the index. The red bars in the chart above show years closing below the yearly moving average, signifying that we’re in a bear market and to be more defensive. Meanwhile, the green bars above highlight years where we’ve closed above the yearly moving average when it was time to be more open to building positions in gold stocks. As we can see, we had a 10-year period from 2007 to 2018 when we were in a bear market, outside of a brief relief rally in 2010 and 2011 that turned out to be a bull trap. However, 2019 was the first year in over a decade that we closed back above this yearly moving average, and currently, we’re on track to see this annual moving average (orange line) flip back to a positive slope. The key to maintaining this bull market posture is to make sure we maintain yearly closes above $19.00, where the yearly moving average lies. Thus far, the pullback below this annual pivot was bought up massively by the bulls, but the key going forward will be defending it on any further weakness.

If we move down to a quarterly chart, we can see that the key to moving back to the powerful uptrend we enjoyed in 2010 through 2011 is a quarterly close above multi-year resistance at the $32.00 level. We can see that this area used to be prior support for the market in 2007 through 2011 before the GDX broke down, and it’s also become new resistance in both the 2016 bull market and at this year’s highs. If the GDX could put in a quarterly close above this $32.00 level, this would flip all time-frames to bullish for the miners. Therefore, while we are currently in a bullish posture on the yearly chart, the lower time-frames remain muddled, and $32.00 is holding this bull market back from its full potential. 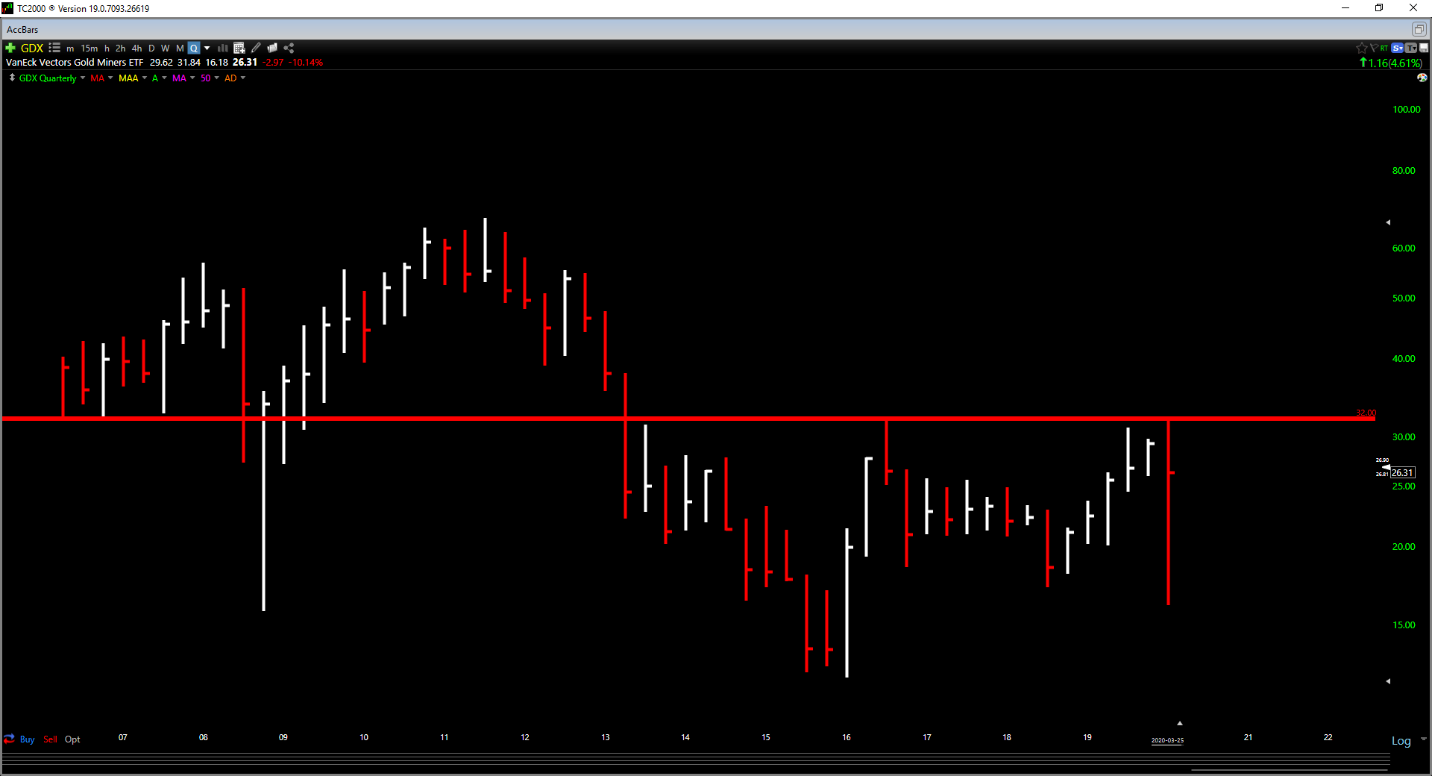 While the yearly chart remains bullish for the GDX, which suggests we’re in a bull market, chasing the GDX while it’s up nearly 70% in 10 days is probably not a wise move here. The $27.40 level is the first short-term resistance level for the GDX, and I would view any rallies that can’t get through this level to be noise as we are getting quite overbought. My plan is to look to buy the GDX on pullbacks of 20% or more, and I may start a position near the yearly pivot of $19.00, or slightly higher. For now, I am long gold only.