The rise in optimism is primarily being attributed to a surge in domestic consumption due to declining unemployment and an increase in exports. The jobless rate is still at a record low of 5.7%. This presents a case for stronger spending and growth.The index, measured by the Institute for Economic Research (Ifo), is a survey conducted by involving around 7,000 businesses in Germany panning across construction, wholesale and retail industries.

Earlier this month, Germany released its industrial output data. German factory orders increased 1% in May 2017 compared with a decline of 2.2% in April. On a year-over-year basis, it increased 3.7% compared with a 3.3% increase in April 2017 (read: German Factory Orders Rise: ETFs to Buy).

The positive economic data is a blessing for Angela Merkel, as she seeks a fourth term as chancellor of Germany. Germans go to polls in September and stronger confidence in the current setting is a positive for Merkel.

Although, ECB President Mario Draghi hinted that the stimulus program will be required for a long time, the market ignored the dovish tone and continued to bet on the euro. The euro surged to a two-year high against the greenback (read: Euro at 2-Year High: ETF Winners & Losers).

Although the euro’s strength is seen as a drag on export growth, the fundamentals of the German economy remain strong.

Let us now discuss a few ETFs that are primarily focused on providing exposure to German equities (see all European Equity ETFs here).

This fund is an appropriate bet for investors looking to gain exposure to German equities while also betting on the euro.

This fund seeks to provide exposure to German equities while leaving the currency exposure unhedged.

Let us now compare the performance of these funds to a broad Europe based ETF, FEZ.

This fund is appropriate for investors looking to gain diversified exposure to equities of the euro zone. 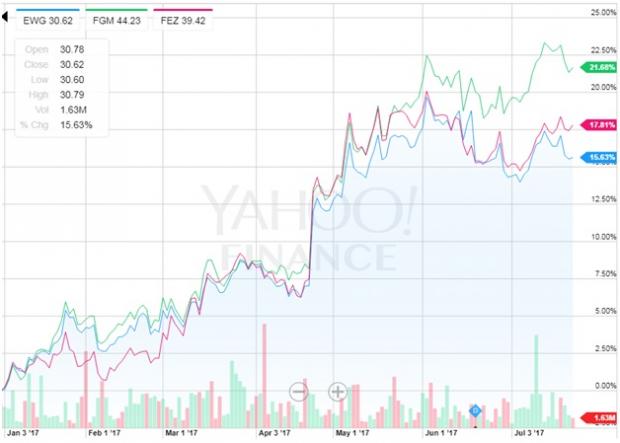 EWG currently has an ETF Daily News SMART Grade of A (Strong Buy), and is ranked #5 of 86 ETFs in the European Equities ETFs category.