The Fed’s pivot from tight monetary policy to loose monetary policy had many of the gold (GLD) bulls feeling brilliant through the summer with a surge higher following the July Fed meeting. Unfortunately, these same bulls are likely scratching their heads with the price action since September. Despite two more rate cuts in September and October by Fed Chairman Jerome Powell, the metal is lower than when the first cut was delivered at $1,520/oz. The reason for this is quite simple. The market saw rate-cut probabilities trickling higher over the summer, and much of this move was already priced in. Fortunately, for those that didn’t chase the highs and get caught up in the euphoria, this divergence from what should be happening is creating a buying opportunity. Let’s take a closer look below:

As we can see in the below chart, low inflation due to steady rate hikes in 2017 through late 2018 kept a lid on gold, with the metal seeing lower highs and lower lows. This playbook turned on a dime in December when Powell changed his playbook to soothe the markets which were selling off sharply at the time. This return to an inflation trade fueled by rate cuts provides a massive tailwind for gold, and those telegraphing a rate cut in July were made to feel like geniuses after gold soared $150/oz in just over a month. Unfortunately, when the public finally enters a trade and thinks they’ve got it figured out, that script often changes to fool the majority. This is precisely what we’ve seen over the past three months, as gold has not followed the green line that it should be following if the market was rational based on fresh rate cuts. 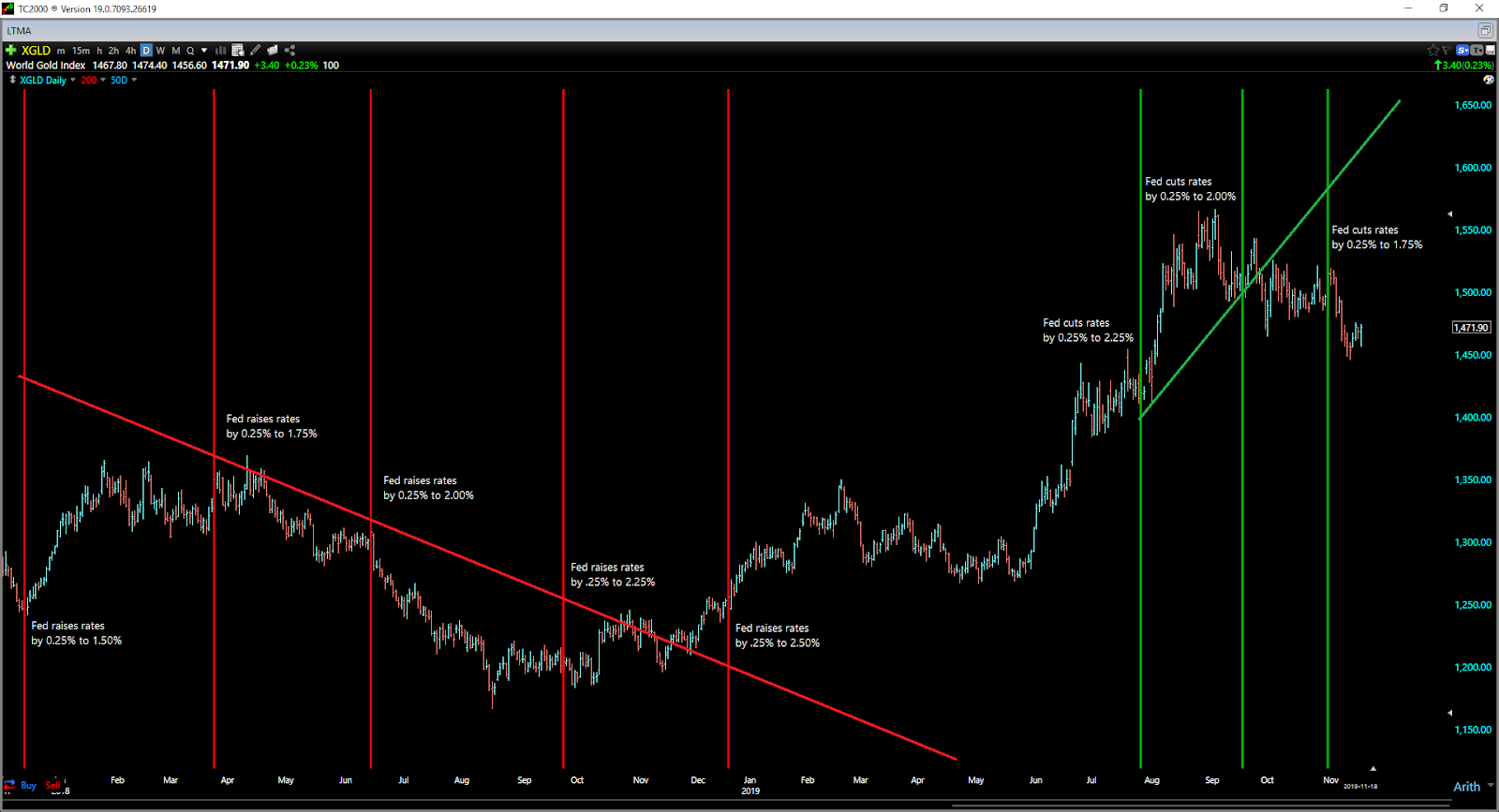 While this divergence from what should be happening is frustrating gold bulls to no end, it’s creating an exceptional setup for those that didn’t chase the highs above $1,520/oz. We now have a fundamental backdrop that is better than it was three months ago, but the market is providing us with lower prices. The current fear is that Fed Chair Powell is going to lay off the rate-cuts going forward and take a wait and see approach over the next few meetings. This is not an issue at all, as the gold bulls got the three cuts they wanted, and the fundamental thesis is already in place for higher prices. This confusion and frustration among market participants have allowed sentiment to dip materially from where it sat three months ago, and this is the setup that those that were patient should be welcoming with open arms.

As we can see from the above chart, the 20-week sentiment moving average has dropped back below 50% bulls, from a reading near 85% bulls during late August and early September. This excursion into the red zone was a sell signal for the metal as it suggested that the trade was getting ridiculously crowded short-term. This drop below the 50% level is not at a buy signal yet, but we’ve seen a massive step in the right direction. Based on this, lower prices for gold would be a gift. If we were to see a drop towards the $1,420/oz – $1,440/oz level for gold, this would likely shake out even more bulls and place this indicator near the green zone. A multi-year breakout that is followed by pessimism three months later is about as close to a lay-up trade as one can get. I believe this would provide the best buying opportunity of the past 18 months if this transpires. The key is that the bulls hold above the $1,420/oz level ideally, as this shows that the metal is finding support where it needs to.

To summarize, the frustration and confusion among the gold bulls camp is a great sign and should be embraced by those wise enough to take profits into the August short-term mania. We now have slight pessimism in sentiment, lower prices, but a better fundamental backdrop for the metal. Further weakness from current levels should provide a buying opportunity, and I plan to take advantage of this weakness by being a buyer at $1,420/oz or less. I am currently long a starter position in gold from $1,445/oz, but would likely beef up this position on further weakness.