“The geopolitical tensions and an expectation of a more dovish Fed pushed investors to increase their gold exposure,” Mark Keenan, global commodities specialist at Societe Generale, said in a note. “Gold continues to be extremely overbought with short positions staying at their yearly lows and long positions climbing to their highest level since February 2018.”

“This extreme positioning is likely to linger as [Fed Chair] Jerome Powell reassured markets about the Fed’s capacity and willingness to support economic expansion with rate cuts and other unconventional management tools,” Keenan said. 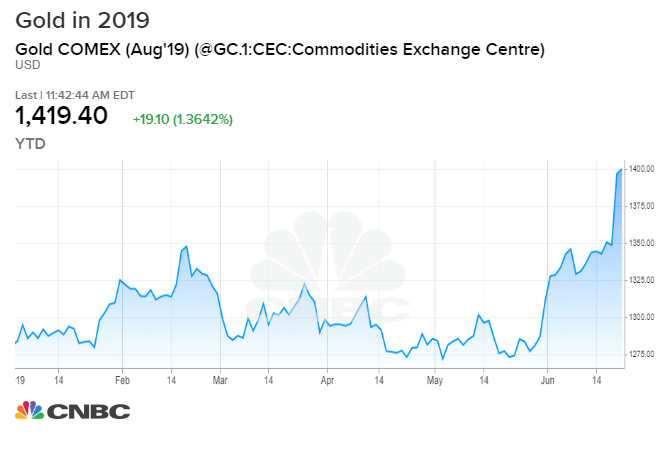 Investors piled into gold after the Fed said last week it would “act as appropriate” to keep the current economic expansion going. The Fed also said inflation was running below its 2% target. Those comments increased the odds of the Fed cutting rates in July, weakening the dollar.

“It’s a much more favorable backdrop. It seems to be a combination of trade tensions attracting flight to safety and concerns about global easing of monetary policy,” said Suki Cooper, precious metals analyst at Standard Chartered Bank. She said gold could hit technical resistance at $1,425 and she expects it to reach a high of $1,440 this year. Cooper added gold had been struggling to break through resistance at $1360 and $1365, and got a boost when the Fed looked set to move toward rate cuts.

“It was much more a macro driver . The recent move in the past two sessions has been accompanied by dollar weakness so it’s not just a gold story.”

The U.S. dollar fell 0.2% against a basket of currencies, trading at 96.02. The dollar also hit its lowest level since March 21 against other major currencies. A weaker dollar boosts gold prices by making it cheaper for traders outside the U.S. to buy into the precious metal.

The Fed’s dovish stance also boosted equity prices last week. The S&P 500 rallied more than 2% last week and hit a record high as investors priced in a 100% probability of a rate cut next month.  Lower rates make it cheaper for companies to borrow money and expand their business or increase share buybacks.

Gold prices also got a boost as tensions between Iran and the U.S. lingered. President Donald Trump threatened on Monday to impose “major” sanctions against Iran after the Middle Eastern country shot down a U.S. drone over Iranian airspace.