GoldCore: India’s gold imports were over a staggering 150 tonnes in November and have seen a “phenomenal” rise in India, according to India’s Trade Secretary, Rajeev Kher.

A few weeks ago we said that the death of the Indian gold market was greatly exaggerated. The latest gold import data out of India confirms this. 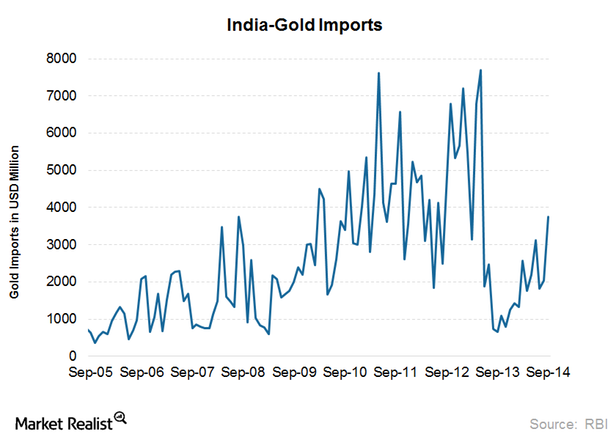 The import restrictions on gold that were imposed on Indians in August of 2013 were lifted at the end of last month. Despite the fact that the restrictions were still in place gold importation in November surged an incredible 571% relative to the same month last year at over 151.58 tonnes.

This was an increase of 38 percent from 109.55 tonnes a month earlier, trade ministry data showed on Tuesday.

The Indian government had recognized the socially destructive impact of the 80:20 scheme – which obliged importers to export 20% of it’s gold imports before bringing in another shipment – by pushing business into the hands of smugglers and thereby empowering criminality while losing out on the 10% duty currently charged on all gold imports.

It had been assumed that, because demand was being met by these “informal” supplies, the relaxing of the 80:20 policy would not have a dramatic impact on gold imports into India. That remains to be seen. Smuggling networks are now well established and arguably could provide cheaper gold than government-sanctioned channels.

The restrictions were put in place because the appetite of the growing Indian middle classes for gold was causing India to run large trade deficits. It is believed that it was also a misguided attempt at financial repression of gold in order to discourage Indians from buying physical gold. There were concurrent attempts to get Indians to open bank accounts and indeed to own digital and paper gold.

This highlights once again how deeply Indians feel about gold in that demand for this single commodity or form of money – could skew the trade deficit in such a dramatic way.

India officially imported $5.6 billion worth of gold in November. The trade deficit increased to $16.9 billion in the same period despite the cost of oil imports being low. This is putting pressure on the rupee which is currently valued at almost 63 to the dollar.

The central bank appears happy enough at this level as it will help boost exports which have been booming. However, India’s trade secretary – Rajeev Kher – has said that any level below 62 rupees to the dollar would cause him to be a “little more concerned.”