No one I know, including myself, can predict with great accuracy the day-to-day direction of any investment. However you can go to the chat board of any investment and most of the people there feel they and they alone know what gold or silver or the Dow is going to do tomorrow. When on occasion they manage to get it right they sprain their arms patting themselves on the back. But if two people are tossing a quarter and one chooses heads and the other tails, one of them will get it right. Markets pretty much can only go up or down, they rarely stay the same.

Due to the friction caused by commissions and the spread between bid and ask, you not only have to be right to make money, you have to be pretty right. A 5% move in the right direction may be necessary to break even.

There are alternative investments where you don’t have to bet on direction to profit. I cover two of them in my bestselling book on Amazon, Nobody Knows Anything.

One is a platinum/gold spread and the other is a silver/gold spread. You don’t have to guess and after all, that is all we are ever doing when investing, we guess what direction an investment will go in next. You can use historical data to determine the range of an investment in the past and presume the future will be similar.

There are relationships behind all sorts of commodities. For some reason sugar and silver tend to make tops and bottoms together. I won’t ever wonder why, they just do. Others are more logical. If you read that Cheerios have doubled in price, you can safely suggest that Wheaties probably will also move up. Whatever affects Cheerios will usually affect Wheaties.

Gold is a precious metal, as is platinum. Over the past several hundred years, for a variety of reason platinum has almost always carried a premium to gold. It’s scarcer and costs more to produce than gold. But since 2015 the spread between platinum and gold has gone negative three times with platinum going higher than a $340 discount to gold three times. 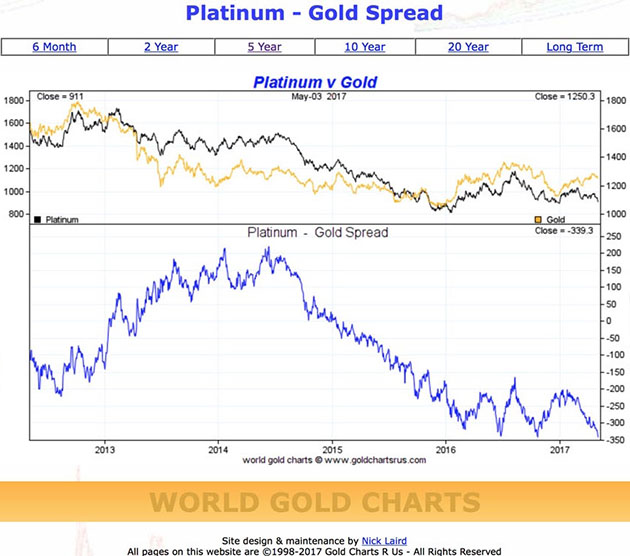 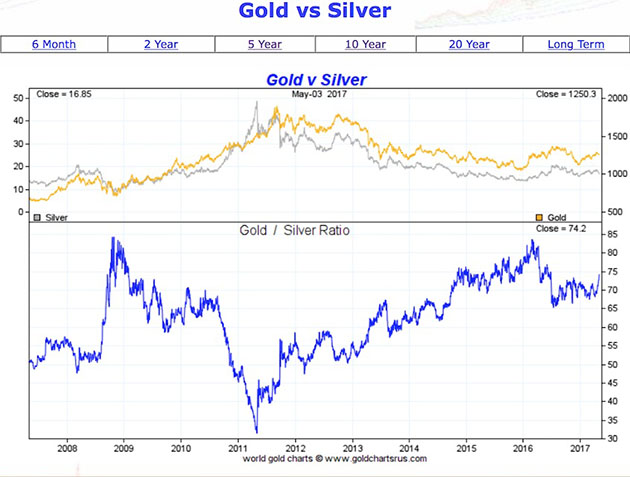 Again the CME has futures contracts where you can trade the ratio. Maintenance margin is a tiny $1450.

Nobody knows what the “right” price is for gold or silver or platinum regardless of all the pundits who claim they and they alone are correct. But you can use history as a guide to determine a safe point at which to invest. Right now gold is more expensive than it has ever been relative to platinum and pretty damned expensive relative to silver. Who knows if the metals will go up or down? But you can make money understanding and betting on past history and still be pretty conservative.

Investing is not rocket science if you understand the basics and use some common sense. There are no gurus.

IAU currently has an ETF Daily News SMART Grade of B (Buy), and is ranked #4 of 33 ETFs in the Precious Metals ETFs category.