Lately I’ve been seeing quite a few analysts calling for a top in gold. I have to say these analysts don’t really understand what’s happening. If they did they would know that far from topping, gold is just getting started.

Just as a preface let me point out that the fundamental driver of this leg up in gold is the same driver that it’s been for the entire 10 year bull market. Currency debasement, only now every country in the world is getting in on the race to the bottom. That being said it’s the dollar’s turn to collapse. The Euro had it’s spell earlier in the year and now that cancer has infected the world’s reserve currency…just like I said it would.

Let me show you a long term chart of the US dollar so you can get a clear picture of what is unfolding. 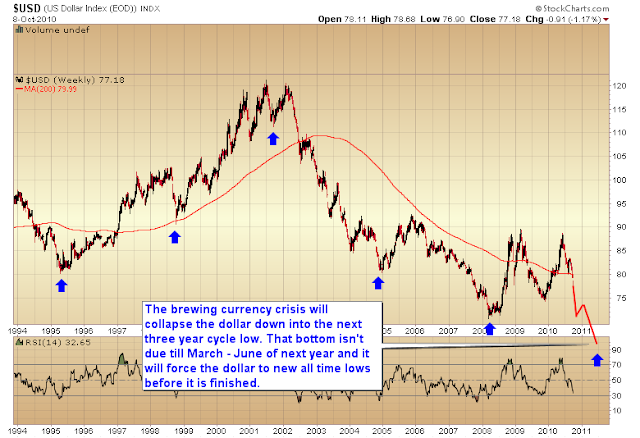 About every 3 to 3 1/2 years the dollar drops down into a major cycle low. I call it the 3 year cycle low but the average duration is 3 years and 3 months trough to trough. The dollar is now on its way down into that major bottom. After a brief bounce off the `08 lows later this year I expect we will see the dollar roll over early next spring as the final plunge begins and the currency crisis reaches a climax.

Next let me show you a chart of the smaller daily cycle. 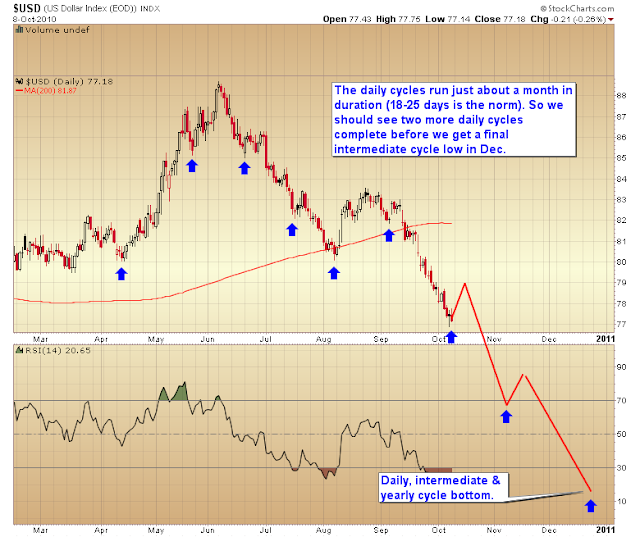 This smaller daily cycle tends to run about a month (18 to 25 days)trough to trough. We are now deep in the timing band for this cycle to bottom. Once it does (it may have on Thursday) we should see a weak rally, possibly back up to test the all important pivot at 80. That should pressure stocks and gold down into their respective cycle lows. I suspect many will take this as a sign that gold’s run is over. It won’t be.

Gold’s drop into the now due cycle low shouldn’t last more than 4-8 days. That’s about how long we can expect the dollar rally to last as it will only be a dead cat bounce to relieve oversold conditions and ease sentiment extremes. Then the dollar will roll over into another decline that should bottom in early November and will likely test the 74 pivot. Again after another weak rally the dollar will crash down into a daily, intermediate and yearly cycle bottom that should test the `08 lows at 71. That is the point where the gold rally should take a more significant rest. 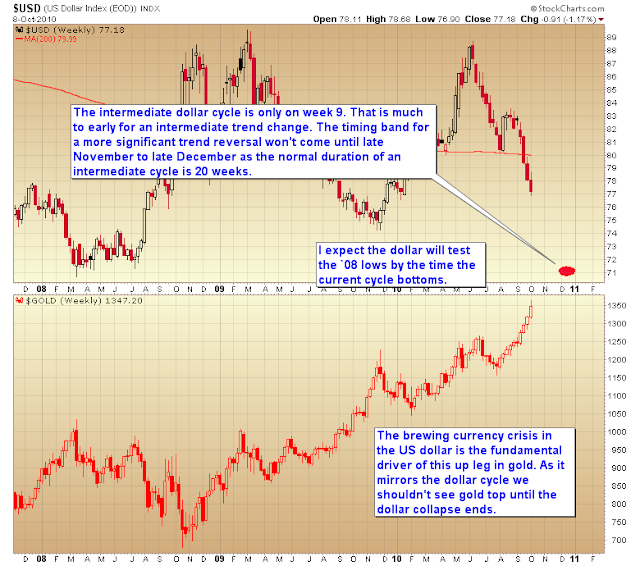 As I noted in the above chart the intermediate dollar, and gold cycle for that matter, runs on average 20 weeks. Last week marked the 9th week of the dollars intermediate cycle. It’s way too early to look for a major bottom yet. If the cycle runs the “normal” 20 weeks then we won’t get an intermediate bottom until late December. Considering the last yearly cycle low came in early December of `09 mid December should be a fairly accurate target for an intermediate bottom.
I can assure you that while the dollar crisis intensifies this winter gold will not be sitting still and it certainly won’t be topping. ﻿As the dollar crashes down to test the `08 lows I expect we will see gold rocket to at least $1450 and $1550ish is probably a more realistic target.
ETF Daily News Notes These Related Gold ETFs: SPDR Gold ETF (NYSE:GLD), Market Vectors Gold Miners ETF (NYSE:GDX), Market Vectors Junior Gold Miners ETF (NYSE:GDXJ), ETFS Physical Swiss Gold Shares (NYSE:SGOL), Ultra Gold ProShares (NYSE:UGL), PowerShares DB Gold (NYSE:DGL), PowerShares DB Gold Double Long ETN (NYSE:DGP), iShares COMEX Gold Trust (NYSE:IAU), PowerShares DB Gold Double Short ETN (NYSE:DZZ), UltraShort Gold ProShares (NYSE:GLL), UBS E-TRACS CMCI Gold TR ETN (NYSE:UBG), PowerShares DB Gold Short ETN (NYSE:DGZ).
But don’t forget the larger three year cycle low isn’t due to hit until next spring/summer. The dollar rally out of the yearly cycle low in December will also be a dead cat bounce, although it should last at least a month or two, but ultimately it too will fail and the true consequences of Bernanke’s monetary policies will come home to roost as the dollar crashes down into the three year cycle bottom and the currency crisis reaches a climax next year. 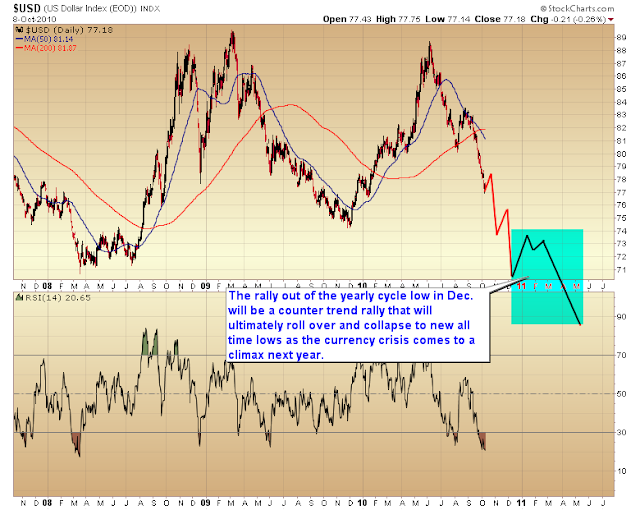 That will drive the final leg up in this huge C-wave advance, possibly as high as $1700 -$1800.
So yes gold is due for a minor corrective move but it is a long way from the final topping process of the current C-wave that began in April of last year when the B-wave decline tested 850 which by the way was the top of the 1980 bull market.
Folks we are never going to see $850 gold again. And I seriously doubt we will ever see $1200 gold for the remainder of this bull market.