The precious metal declined nearly 1% to $1,409, coming back after its rally topped out at six-year highs on Tuesday.

After that surge, Newton Advisors technical analyst Mark Newton says the yellow metal may have come too far too fast.

“For the GLD [gold ETF], getting up above $130 is very constructive in the intermediate term. The real issue, though, is that momentum has gotten very, very overbought in a short period of time. The GLD is up over 12% just since the latter part of May, ” Netwon said on CNBC’s “Trading Nation ” on Tuesday.

Those moves have taken gold to unsustainable levels in the near term, says Newton.

“It’s right to really look the other way for a few different reasons,” said Newton. “You have at least near-term signs technically that interest rates and the dollar might be near short-term support, so if those start to stabilize and rally in the month of July that could put some pressure on precious metals.” 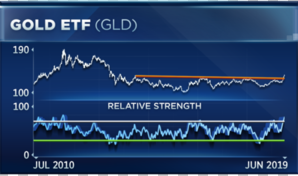 “Gold near term is not at the best level to initiate new buys, but on an intermediate basis really any pullback would be a chance to get involved over the next one or two months coming into really a very seasonally bullish time into the fall,” said Newton. 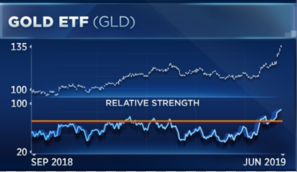 Michael Binger, president of Gradient Investments, says the gold trade could still get a bid as trade tensions linger.

“A lot of investors are very fearful of a trade-induced recession, not only in the U.S. but around the globe,” said Binger during the same segment. “I think they’re hedging their bets with gold. I think this breakout, it’s been such a dead asset class for a long time that this breakout is exciting people who are looking for some kind of opportunity around the world.”

Risk-off assets such as gold could continue to get a bid with the low chances that trade tensions completely dissipate at the upcoming G-20 meeting where President Trump and Chinese President Xi are set to meet, Binger predicts.

“I don’t think the G-20 is going to do much to alleviate trade-induced recession fears. The president seems to want to walk down the U.S. dollar, which should help gold, so in our opinion we think this momentum can continue into the intermediate-term future,” said Binger.