It’s been a tough couple of weeks for the Gold Miners Index (GDX) as the sector has plunged nearly 20%, despite a less than 5% drop in the gold (GLD) price.

Many investors have thrown their arms up in the air claiming manipulation given the downside leverage we’ve seen in the GDX, but they are ignoring the fact that the miners outperformed the metal by 500% off of the March lows.

Therefore, some mean reversion in this outperformance is entirely normal, and is not manipulation at all; it’s merely the sector’s ways of cleaning out the weak hands and relieving overbought conditions.

While some investors may be throwing in the towel after the weakness we’ve seen, I believe this is instead presenting an opportunity to begin nibbling on miners while they’re back on sale.

However, the key going forward will be that GDX defends a pivotal level, as does the Gold Bugs Index to S&P-500 Ratio (SPY).

Generally, a 20% correction in an index might be cause for concern, especially if that correction was occurring in a short span of just two weeks. However, it’s essential to put the magnitude of a correction in perspective. In the GDX’s case, the index was up 120% in 10 weeks before its recent correction, meaning that a 20% to 30% correction would be entirely reasonable to relieve the overbought conditions that had built up in the index.

It’s also worth taking a look at how the index looks from a long-term standpoint, versus trying to make sense of a daily chart which is often prone to whipsawing investors. As the long-term chart below shows on the Gold Miners Index, the ETF is merely back-testing a 5-year breakout, which occurred in late April, and thus far, the bulls are playing defense exactly where they have to for now. 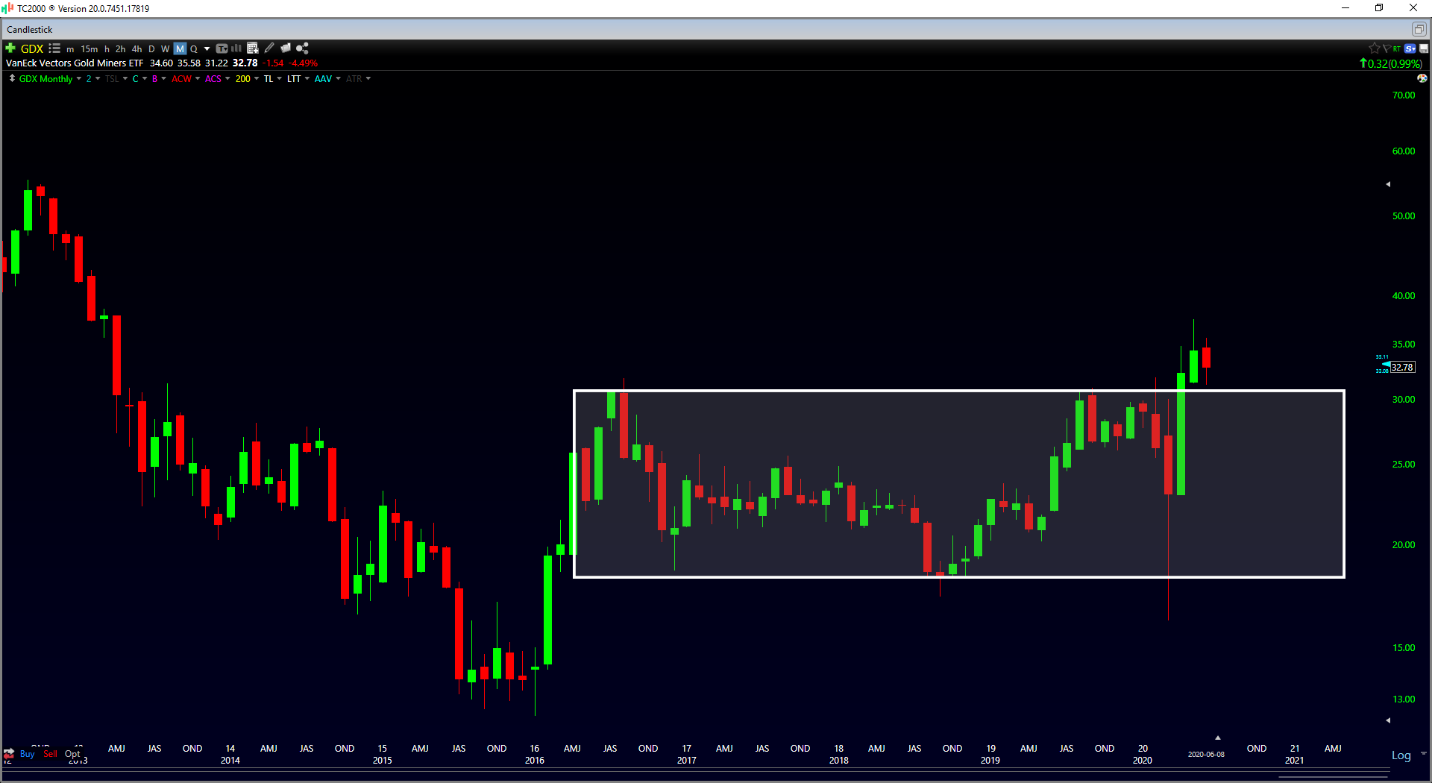 Therefore, while this correction may not feel great for those that chased the index a couple of weeks ago at much higher levels, we have seen zero technical damage inflicted to date on the index.

Of course, there’s no guarantee that this area is going to hold, but typically when we have a breakout through a multi-year resistance level, the bulls play defense on any pullbacks to this area. The area to watch to confirm this is $31.05 on the GDX. As long as we do not see a break back below this pivotal level, however, I would consider this correction to be merely noise and a run-of-the-mill shakeout, which are quite common in the earlier innings of a new bull market.

We can also test to see if this correction is healthy by examining the relationship between the Gold Bugs Index and the S&P-500. As shown in the chart above, the Gold Bugs Index to S&P-500 ratio broke to a new multi-year high in early Q2 and is sitting above rising weekly moving averages, a bullish sign. As long as this critical moving average is defended (yellow line), this correction is entirely healthy, as it’s merely a mean reversion in this indicator. However, if we were to see a breakdown in this indicator like we saw in 2016, this would be a red flag and suggest that maybe this was a very well-orchestrated trap for the GDX bulls that could require some pain to unwind fully. Therefore, the key to this correction continuing to look normal is for the $0.07 area for the Gold Bugs Index/S&P-500 ratio to be defended.

While some investors are puking up shares in mining names on this recent correction, I believe the best course of action is nibbling on the best names in the sector. A 20% correction in a bull market is typically a buying opportunity, not the time to proclaim an end to a bull market. This is especially true when we just witnessed a multi-year breakout only six weeks ago. Two clear stand-out names continue to trade at extremely attractive valuations relative to their peers: Kirkland Lake Gold (KL) and Skeena Resources (SKREF). Both companies have higher-grade projects than their peers, are located in Tier-1 jurisdictions, and are trading at 30% lower than their peer’s multiples. This is where I remain focused currently, with positions spread across a few other miners, and I would consider starting a correction in the GDX if this weakness persists.

Bull Market or Bull S#*t? How to trade today’s stock bubble and prepare for the return of the bear market.

GDX currently has an ETF Daily News SMART Grade of B (Buy), and is ranked #19 of 34 ETFs in the Precious Metals ETFs category.