John Townsend: Last evening I was looking at all my various indicator concoctions and started to wonder if perhaps gold still has not made its final D-wave bottom. The indicators last evening suggested to me that, as crazy as this sounds, a D-wave bottom could still possibly be ahead of us. And after today’s sky dive of $44 I kinda think maybe my idea is not so crazy after all.

Anyway, should gold reach an intra-day price of lower than 1523.9 anytime soon, that would entirely rephase the current understanding. i.e. we would be still in the process of making a D-wave bottom with the explosive A-wave just before us.

So I got to thinking. Maybe all B-wave bottoms had a common characteristic? And if gold does not currently possess this quality, whatever it is, perhaps we really have not seen the D-wave bottom yet. Hmmm………

From past research on D-wave bottoms I learned that the retracement of the preceding C-wave was always 50% or greater. I also learned that each C-wave price trend line was finally broken to the downside before a D-wave bottom was finalized.

To my satisfaction I have determined (and posted) that the previous C-wave price trend line has been broken to the downside. So that took care of that oddity.

As for the Fibonacci retracement, gold has only retraced exactly 38.2% of its recent C-wave (April 2009 – September 2011). This does not fit the rest of the puzzle, but likewise, neither does the fact that gold has now produced two left translated intermediate cycles following its most recent C-wave top. All other C-wave tops were followed by a single left translated intermediate cycle.

Hmmm……. Nothing I can do about the two left translated cycles. Is there still a chance the retracement will extend past 38.2% to a 50% retracement – like all the others?

Anyway, the highest price that C-wave tops can reach is somewhat predictable based on the degree to which price has been able to climb above its 200 dma.

But I’ve never seen any research on how severely gold has been submersed below its 200 dma at various times, and of special interest at this moment, how low below the 200 dma and how many trading days after gold B-wave bottoms has price remained below the 200 dma?

If the answer to these questions interest you, stick around because I am about to show you. Not only that, but I am going to leave you wondering if perhaps gold has not bottomed just yet, after all.

Throughout the following 5 daily Gold Futures charts (GC) I use the color magenta to help identify the C-wave tops, the color red to locate the D-wave bottoms and the color green to spot the B-wave bottoms.

After each B-wave bottom, which is defined as the day with the lowest intra-day price in the vacinity, I provide a count of the number of days following that day that gold’s price closes below the 200 dma.

Let’s begin our study with a daily chart detailing the 2002 C-wave parabolic top and the B-wave bottom that followed in latter 2002, and continuing into 2003 where we find first a C-wave top then a D-wave bottom, and followed by the 2003 B-wave bottom. 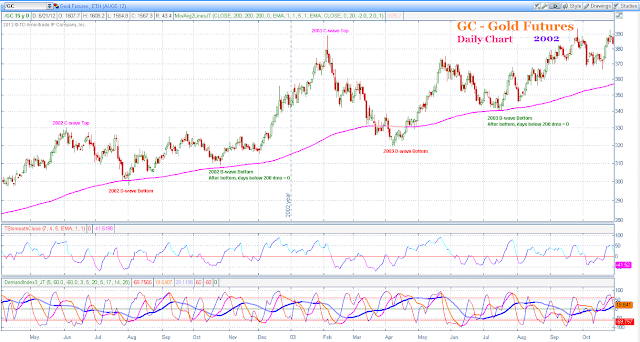 Fine, so what about the action in 2004 and thereafter?

(But first let me remind readers that 2004 had not one but two parabolic C-wave tops. The first peaked in early April, the second in early December). 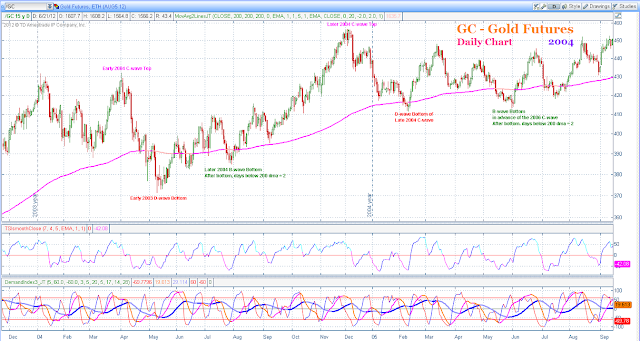 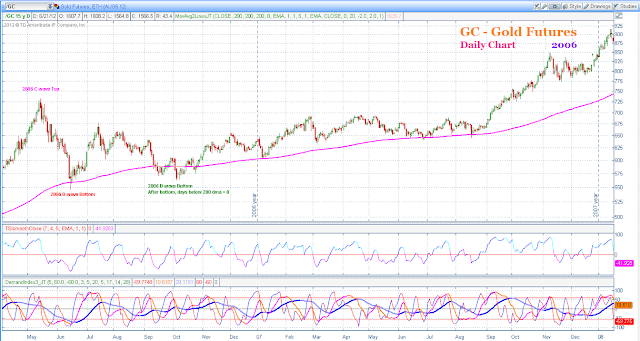 So now, here is the next B-wave bottom. It followed the 2008 C-wave top and the horrendous 2008 D-wave bottom. If ever the number of days below the 200 dma were to continue to increase, I would bet money this was the year. 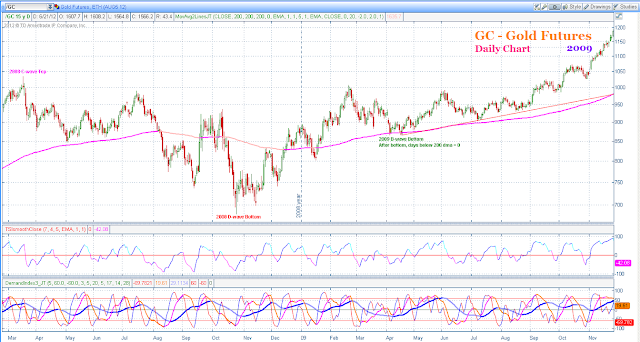 Well I’ll be darned. The B-wave bottom following the horrific 2008 D-wave that practically blew miners right off the stock exchanges and corrected its C-wave some 89% hadhow many days below the 200 dma after its bottom?

I am starting to wonder if gold likes to set off its C-wave at or just below its 200 dma – kinda like a sprinter who wants to be leaning just barely ahead of the starting line in anticipation of the bang sounded by the starter’s gun. It’s a fair question, isn’t it? 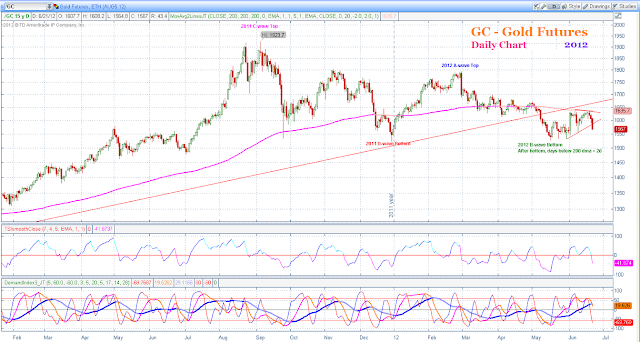 But since that date, gold (GC) has been under the 200 dma for 26 days? Hmmm……. either this is weird or something is not quite right, and I am not quite sure which it is.

Oh, and I forgot to mention this: the magenta curving line is the 200 dma. If it is rising, it is magenta. But when it has a single bar (day) that it declines, it turns kind of a light pink color. Anyway, we note that the 200 dma has been declining (pink) for the past 6 weeks or so.

All previous B-wave bottoms rocketed up through a rather flat 200 dma – not a declining one of length and momentum. Hmmm….

The red wedge I had drawn on the most recent candles was just something I have been watching – and clearly, today the wedge was violated to the downside.

Also, the straight diagonal magenta line is that C-wave price trend line I identified a while back once I set my chart to log scale.

Good questions. Write me with the answer if you know it, or otherwise any questions you may have. 🙂

Have a profitable Friday and a relaxing weekend,