In June, the US Federal Reserve told markets that short-term interest rates would move lower by the end of 2019. The move lit a bullish fuse under the gold market and sent the price of the yellow metal above its critical level of technical resistance at $1377.50, the July 2016 high. On July 31, the US central bank cut the Fed Funds rate for the first time in years.

The gold market initially rallied on the prospects for lower rates which decrease the cost of carry for the precious metal. Moreover, gold competes with other assets for investment capital and a falling rate environment in the US and around the world has been a bullish factor. However, the price action since early August shows that the gold market has been highly sensitive to the ups and downs in the trade war between the US and China. An escalation of the protectionist environment has supported rallies while de-escalation has caused corrections in the precious metal. At the same time, other issues facing the world are supportive of the price of gold these days. The SPDR Gold Shares product (GLD) is the most liquid gold-related ETF and the most successful commodities product with over $43 billion in net assets as of the end of last week.

The early August escalation lifted the price of gold

The Fed cut rates on July 31 by 25 basis points, but the event that caused the price of gold to move appreciably higher did not come from the central bank. 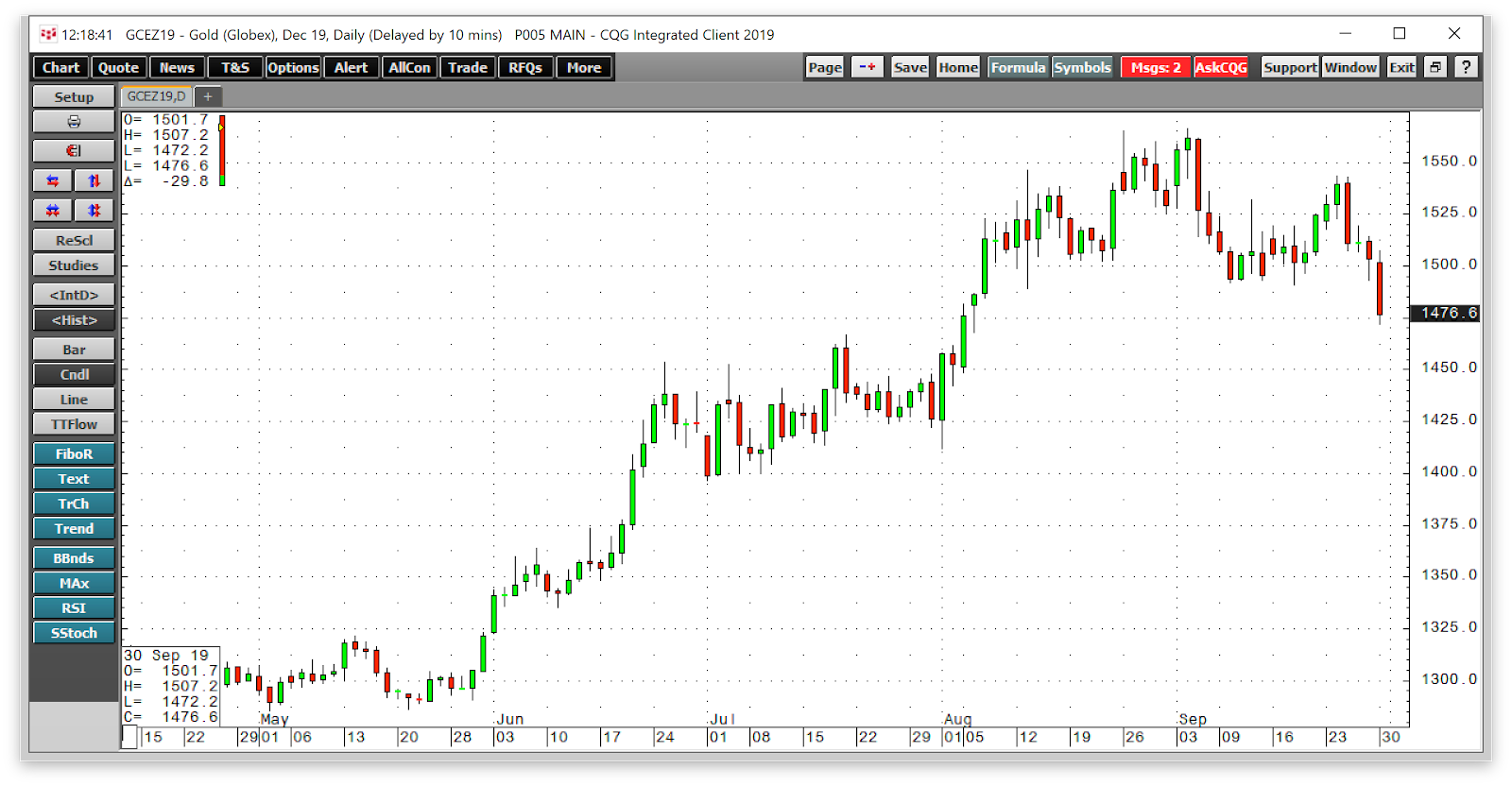 The daily chart shows that the kneejerk reaction to the July 31 Fed meeting was not all that bullish for the gold market. There was a bit of disappointment when the Fed only cut by a quarter-point. Many market participants had expected a more aggressive fifty basis point move by the central bank. On August 1, President Trump became frustrated with the progress of trade negotiations and Chinese backtracking on issues and slapped China with a new round of tariffs. As the daily chart of December gold futures illustrates, the news on trade caused the price to reverse and pit in a bullish reversal on the first day of August. The Chinese followed with a round of protectionist measures, which pushed the price of the precious metal above the $1500 per ounce level on August 7 for the first time since 2013.

After reaching a high at $1566.20 on the December contract in early September, US and Chinese negotiators have been talking again and the price of the yellow metal corrected. The price fell to a low at $1472.20 on September 30, and after a recovery to $1543.30 on September 24, the price dropped to a lower low on the final day of the third quarter.

The Chinese need a trade deal with the US for economic reasons. The financial impact of the trade war has weighed much more on China than the US. President Trump needs a deal for political reasons. With his 2020 re-election bid coming up and trailing in the polls, delivering on his 2016 campaign pledge to move the needle on trade with China would be a victory. Moreover, with the House of Representatives conducting a formal impeachment inquiry, the political necessity of a trade deal has risen, perhaps dramatically. At the same time, the dollar index has moved higher, which could be weighing on the price of the yellow metal.

Trade is not the only supportive factor for the gold market

The ongoing saga of Brexit is another issue that could cause risk-off periods that would drive buying into the gold market over the coming weeks. The October 31 deadline is likely to be a moveable target leading to another general election in the UK that will serve as a second referendum on the divorce from the EU.

While there are many reasons for the US and China to reach a deal, it could be a bumpy road. The price action over the past months tells us that any escalation would lead to buying in the gold market. At the same time, interest rates in the US and around the world are falling, which makes gold more attractive than fixed income and other assets.

Gold is now correcting, but these issues and more could cause market participants to buy the yellow metal on the dip as the trend is bullish since the breakout above the 2016 high in June. Critical technical support stands at the breakout level at $1377.50, which was still around $100 below the price on September 30.