Spot gold prices surged to levels not seen in more than 5 years. The commodity is currently trading 1.66% higher at around $1,382.91 per ounce. 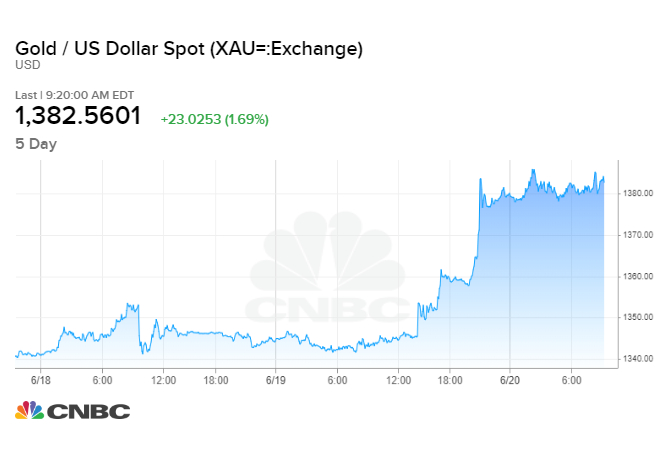 Following the Fed meeting on Wednesday, where the U.S. central bank left interest rates unchanged but opened the door for a possible rate cut in the future, the 10-year Treasury yield also slipped below 2% for the first time since November 2016 — breaching an important psychological level.

One economist told CNBC that the surge in gold prices were likely driven by the declines in yields of shorter-duration Treasurys ranging between three months and two years. The yield on the 3-month Treasury note trickled lower to 2.146%. The 2-year note dropped to 1.716%.

With expectations for the U.S. Federal Reserve’s funds rate to drop by 2020, gold has become “quite attractive” as a result, said Rob Carnell, chief economist and head of research for Asia Pacific at ING.

The shorter end of the yield curve tends to move in line with interest rate movements, meaning that a lower expected Fed funds rate will likely drive short term yields down. As the yields on the shorter-duration notes go down, gold becomes more attractive as an investment option due to its relatively higher yield.

“The gold market is suggesting to us that there’s sufficient liquidity to move the medal higher,” said Jeff DeGraaf, founder and chairman of Renaissance Macro Research. “Whether that’s a precursor to inflation or just a reflection of low carry cost, it’s hard to pin down what that cause is.”

The Fed’s rate projections showed that eight Fed members see a cut this year, which traders took as a further sign the central bank was close to cutting rates. Its median forecast, however, still reflected no cuts this year, but additional easing in 2020. Nine members on the Federal Open Market Committee wanted a cut to a funds rate around 2.1% in 2020.

Demand for safe-haven assets is still elevated because of ongoing geopolitical uncertainties, said founder of The Sevens Report Tom Essaye.

“The global fundamental backdrop remains unclear, which is keeping a flight-to-safety trade alive. But with real yields on bonds declining, gold’s appeal as a safe haven is growing, all while a weaker dollar is supportive of commodities broadly,” said Essaye.

Han Tan, market analyst at forex brokerage FXTM, attributed the gold price spike to a weakening dollar on the back of the dovish Fed statement as well.

“The Dollar’s weakness that followed the Fed’s dovish pivot has sparked the surge in Gold prices, given the gloomier outlook over the global economy. With major central banks such as the Fed and the ECB citing greater uncertainties, such dovish tones from policymakers are roaring on Bullion bulls,” he wrote in a note.

The dollar dropped broadly against its rivals on Thursday and is on track for its biggest two-day drop in a year.