Instead of paying out extra cash to investors, tech high-fliers typically reinvest cash in research and development, mergers and acquisitions, and other classic “growth” strategies. That’s why their earnings – and share prices – grow faster than average.

But, like a classic searing-hot tech stock, DDD has never paid a dividend.

That’s why investors looking for high-yield dividend stocks go to sectors like utilities and consumer staples.

These companies have matured. Their growth phases are over, so they use their strong cash flows to pay dividends. This attracts investors even if the stock has low share-price growth.

Procter & Gamble (NYSE: PG), for example, has increased its dividend for 57 straight years and offers a yield of 3.23%.

But a few years ago, things started to change. Now companies like this also exist in the tech sector.

In fact, some of the biggest names in tech have become high-yield dividend stocks that rival traditional dividend payers in yield and market performance.

As tech companies mature and transition from their growth phase into a more stable period, they usually find themselves with more cash than they know what to do with. That’s why a couple of years ago, tech dividend payouts picked up the pace. They jumped about 14% in 2012 – compared to the previous years’ increases of about 10%.

According to the online investing resource Investopedia, over the past 10 years tech has increased its average dividend payments by 25%. That’s about 10% higher than the second-biggest dividend payer, consumer services.

Now Apple Inc. (Nasdaq: AAPL) is the largest dividend payer in the Standard & Poor’s 500 Index. It paid out more than $10 billion in dividends in 2013.

Another reason to turn to tech for yield is, not only do these dividend payers provide income, but they also have outperformed market downturns. Many have shown sustained growth even in volatile markets.

For instance, the Nasdaq Composite plummeted 8.22% between March 5 and April 11 this year. In the same time period, tech giant Microsoft Corp. (Nasdaq: MSFT) – which pays a quarterly dividend of $0.28 per share – gained 2.08%. 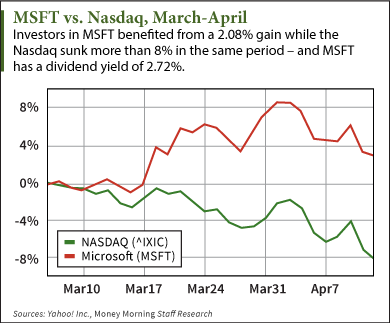 Now, here’s a look at five high-yield dividend stocks in the tech sector.

U.S. chip manufacturer Intel doubled its dividend from 2007 to 2012, now paying $0.225 on a quarterly basis, or $0.90 annually. That’s good for a yield of 3%. And, with a price that’s only 11 times next year’s earnings, it could still see significant growth in the next year. Plus, those who are assembling an income portfolio will be pleased to know that Intel has increased its dividend every year for the past decade.

The world’s second-largest IT company by revenue, Apple started offering a dividend in 2012 after a 17-year hiatus. But, according to FactSet dividend information, it has quickly climbed to become the second-largest payer of dividends in the S&P 500, second only to Exxon Mobil Corp. (NYSE: XOM). Apple investors were rewarded with a $3.29 dividend on May 8, good for a yield of 2.04%. 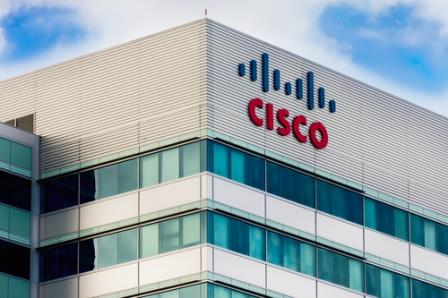 In mid-December, networking equipment master Cisco Systems increased its dividend after a phone call from consumer advocate Ralph Nader. Nader urged the company, which had $45 billion in liquid assets, to share the wealth with their investors. Cisco obliged, boosting its dividend from $0.17 per quarter to $0.19 per quarter for an annual dividend of $0.76. That’s good for a 3.1% yield.

The world’s largest software maker by revenue, Microsoft is stable and cash-rich, with over $77 billion on its books. However, that has not stopped the company from increasing its dividend every year for more than 12 years. TCW Dividend-Focused Fund portfolio manager Diane Jaffee told CNBC in March that she believes “there’s still lots of room for dividend growth” for MSFT.

Arizona-based semiconductor manufacturer Microchip Technology’s stock is another that has shown sustained increase in dividends over a long stretch of time. According to a January announcement from the company, since introducing a dividend in 2003, MCHP has increased its dividend 40 times.

January’s announcement pushed this high-yield dividend stock to a record-breaking $0.3555 quarterly dividend, good for a yield of 2.91%. Microchip President, Chief Executive Officer, and Chairman Steve Sanghi credited the increase to the company’s sustained cash generation. MCHP traded at $48.83 per share on Monday and is up 9.12% in 2014.