It seems the Saudis are more interested in grabbing market share than in attending to the present state of the market.

That move seems calculated to undercut the effect the United States has on global oil markets, even though that effect is indirect.

But make no mistake: Russia is the country that will suffer the most as oil prices drop.

Thanks to the Saudis, this could get ugly very quickly for Putin…

Growing Supplies and Falling Prices Hurt Russia the Most

Up until now, Russia was in a strong position, with the ruble trading at more than 41 to the dollar, an all-time high. 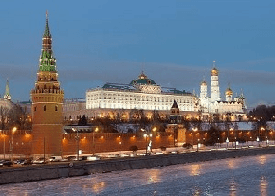 But what’s propping that price up is oil. You see, 60% of Moscow’s central budget is dependent on the international sale of oil and natural gas.

With the current price (West Texas Intermediate) around $82, and dipping below $80 intraday, that budget collapses.

How Low Can Oil Prices Go?

There’s a lot of jawboning going on these days about how far oil prices will fall before a floor forms. Not too long ago, we were having a similar conversation on the expectation that prices would be moving higher.

The essential fallacy in all of this is the patently false assumption in the background. Most projections assume that whatever movement is taking place now will continue into the future.

Oil went up last week? Then it will go up again this week. And the week after. That’s the fallacy.

Retail investors can’t think like that. They need to take the long view. It’s the flash boys that gyrate stock and commodity prices in the short-term to wrestle marginal profit.

And what is happening currently with oil prices has nothing to do with the long term.

In fact, these days the average investor in energy prospers by setting up a strategy with specific companies, not by following broad sector trends and daily gyrations.

However, one traditional consideration has resurfaced as a result of the current extreme volatility.

Focusing on the staple supply/demand connection is back. But in the case of oil, it has a decidedly geopolitical look about it.

It’s the supply side of this equation that’s driving prices right now. Here’s why.

First, it is true that the rise in U.S. unconventional production (shale and tight) has changed the dimensions of global supply. But is it also true that, until Congress changes regulations prohibiting crude exports, that largess has no impact on international trading markets.

The United States is now the largest exporter of oil products in the world, but that has only a very indirect influence on how domestic production’s influences global trading trends. The phase-in of similar production elsewhere in any significant amount is years away. That has no bearing on current prices.

Meanwhile, more production at home means less imported crude is needed. Yet that decline has been ongoing for some time. It is not, therefore, a factor bearing on why the current price is hovering about $80 a barrel in New York.

The tension levels in Iraq and the broader MENA (Middle East North Africa) region, as well as Ukraine and Hong Kong, have yet to translate into any genuine concern over oil. They could very well, of course, but have not yet for one simple reason.

As of now, the Saudis may have accomplished more to economically attack Russia than all of the Western sanctions over Ukraine put together. That is, provided the Saudi price discount remains for any length of time.

The battleground here between Saudi Arabia and Russia is in Asia. As I have noted several times, the international energy balance is tilting toward Asia and will be accelerating in that direction at least through 2035.

Traditionally, Asian end users would pay a premium for Saudi crude, that is, a higher price than Europe or North America would be charged for the same amount.

However, with the opening of the East Siberia-Pacific Ocean (ESPO) pipeline, which stretches 3,018 miles from Russia to China, Russia is competing in the world’s fastest-growing energy market with better quality oil at a lower price. Saudi oil has a higher sulfur content than ESPO (Moscow is developing a benchmark crude rate using the same name as the pipeline).

By lowering its price to Asia, the specific focus of the Saudi action, Riyadh directly undercuts the Russian competition.

Ok, so that may be the real reason for the pricing tactic, but what does that have to do with OPEC as a whole?

Just this – other members of the cartel have been overproducing and selling well beyond their monthly quota. In fact, the last figures compiled by the OPEC Secretariat in Vienna (as of the end of August) indicated the deliberate overproduction was coming in at almost 450,000 barrels per day.

That is the internal target sought by Saudi Arabia.

Overproduction and continued excessive sales by countries like Kuwait and Venezuela are also playing into the supply glut and lowering aggregate prices. Making the excess unprofitable would redress the imbalances within OPEC.

That comes at a price, and some of the members may not accept it because they are now more dependent than ever on crude sale to sustain increasingly unsupportable domestic budgets. Local spending has been the primary way MENA OPEC members have contained a spreading “Arab Spring,” while in Venezuela the economy survives only because of government hand-outs.

The vicious cycle has chained these countries to dependence on crude oil sales. Oil may be declining, but that dependence on this one resource has made it difficult for them to diversify their revenue sources.

These countries will remain rentier states (living off the surplus of natural materials without increasing the value of the land itself), and that cycle will make matters even more contentious as we move forward.

And then there is the prospect of an agreement between Iran and the West, opening up competition from Tehran, and the Iraqi intent to increase exports despite an expanding civil war. Iran and Iraq are also OPEC members, but have been unable to reach a monthly quota level (Iran) or have not had one for over a decade (Iraq). Changes here will destabilize what is left of the OPEC balance.

That means two things. First, the genuine influence OPEC has on oil prices will depend on its ability to get its own house in order. Second, the real battle within the cartel has not even started yet.

But the battle with Russia has already begun.